Presidential candidates register for election in Belarus | Europe| News and current affairs from around the continent | DW | 19.11.2010

In a month's time, voters in Belarus go to the polls to elect a president. While live debates among candidates will be broadcast for the first time, analysts doubt whether the elections will truly be free and fair. 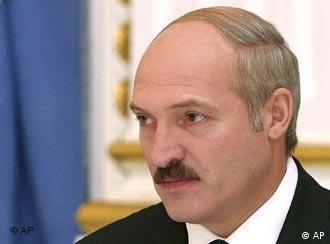 Lukashenko keeps a tight grip on the opposition and media

The electoral commission in Belarus has completed the registration of a record number of 10 candidates for the presidential election on December 19, with incumbent Alexander Lukashenko showing no signs of relinquishing power.

The outcome of a recent opinion poll showed the president's approval rating has dropped to a historic low, with just over 31 percent of the respondents saying they would support Lukashenko in the upcoming elections.

That is still far more than any of the nine alternative candidates, who got between 2 and 11 percent. The divided opposition faces an uphill battle in finding a solid joint candidate that could pose a serious challenge for Lukashenko.

One of the candidates, poet Vladimir Neklayev, visited Poland on Thursday and met with Foreign Minister Radoslaw Sikorski, who said Poland stood "in solidarity with the Belarusian people." 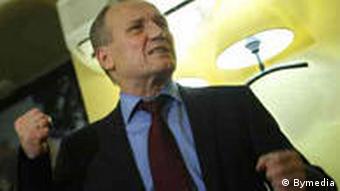 Opposition candidate Neklayev traveled to Poland ahead of the election

"If these elections are fair then Poland is ready - whoever the winner is - to be an advocate for Belarus in Europe," Polish news agency PAP quoted Sikorski as saying.

"We're Belarus' neighbor, we consider it a European country, and we want it to respect European rules. Democracy isn't just about the actual vote, but also press freedom and access to election commissions."

Lukashenko, in power since 1994, has marked his presidency with suppression of dissent and independent media. Yet in an apparent effort to prove the upcoming election's legitimacy, the electoral commission has decided that candidates would have the possibility to speak and hold debates live on radio and television.

"In the past the candidates more than once demanded this, but I think that not many candidates will want to speak live on television," said Lidia Yermoshina, head of the commission.

"That is a great responsibility, it's difficult. [The idea of] holding live debates was proposed by the Organization for Security and Cooperation in Europe, and that is a common international practice."

The debates appear to be aimed at the West, which is closely following events in the country, often dubbed the last dictatorship in Europe. 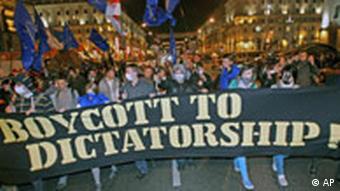 Opposition activists have little faith in the election's integrity

No interest in opposition

Lukashenko will be the fourth candidate to speak on television. He has said he is convinced he will win the elections once again, and told a press conference earlier this fall that the opposition did not interest him at all.

"I don't even know who supports them," he said. "You must understand that if I would try to get to know more about all these things, I would simply help my opponents gain popularity."

Lukashenko may be in a more awkward situation than he ever was since he came to power. Russia has openly withdrawn its support, and a pricing spat with Russian gas company Gazprom confirmed that Belarus can no longer count on cheap Russian energy - bad news for the country's struggling economy.

Improving relations with the European Union is thus especially important, and may be a reason for the decision to broadcast live debates. But despite the facade, Lukashenko himself has said he is not interested at all in whether the elections are accepted as free and fair by the outside world.

German Foreign Minister Guido Westerwelle has met with the Belarusian leadership. This is a good time for the European Union to help Belarus emerge from its isolation, says DW'S Daniel Scheschkewitz. (03.11.2010)