Huge crowds rally in Spain for Catalan autonomy | Europe | News and current affairs from around the continent | DW | 11.07.2010

More than a million people rallied in Barcelona on Saturday to call for greater autonomy for the Catalan region, a day after a constitutional court said there was no legal basis to recognize it as a nation. 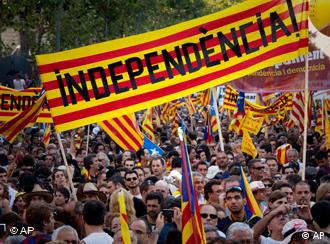 Demonstrators wave Catalan flags in a protest in downtown Barcelona

The ruling also said the Catalan language should not take precedence over Castilian Spanish.

The statute gave the Catalan regional government greater powers in taxation and judicial matters as well as more control over airports, ports and immigration. 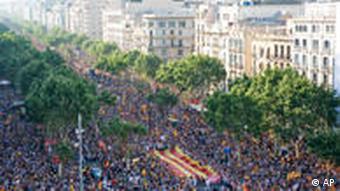 The court ruled that the term "nation" defining Catalonia in the statute had no legal value because "the constitution only knows one nation, Spain."

Saturday's march in support of the statute of autonomy was led by the Socialist leader of the regional government José Montilla.

A huge Catalan flag with the slogan "we are a nation, we decide ourselves" was unfurled while the crowd held up thousands of red and yellow Catalan banners.

The statute has the support of the vast majority of political parties, trades union and social organizations in Catalonia, where a sizeable minority would like to see the wealthy region break away from Spain. 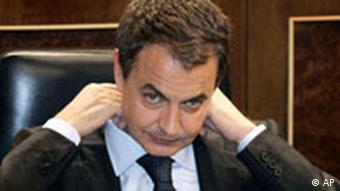 The statute was one of the first initiatives of the Socialist government of Prime Minister Jose Luis Rodriguez Zapatero, which took office in 2004. But the opposition conservative claim the statute undermined the idea of Spain as a unified state.

It was approved by the parliament in Madrid in 2006 afer it was endorsed by Catalan voters in a referendum.

Catalonia is home to around seven million of Spain's population of some 47 million, and accounts for 25 percent of its gross domestic product.

Catalonia's government has been challenging the Spanish national government in Madrid in different ways since the country's return to democracy in the 1970s. Now it is expanding its reach into the film industry. (01.07.2010)

A non-binding referendum in Catalonia has revealed a desire for greater autonomy from the government in Madrid. But the poll was not as popular as organisers had hoped. (14.12.2009)