Catalans endorse independence in unofficial ballot | Europe | News and current affairs from around the continent | DW | 14.12.2009

A non-binding referendum in Catalonia has revealed a desire for greater autonomy from the government in Madrid. But the poll was not as popular as organisers had hoped. 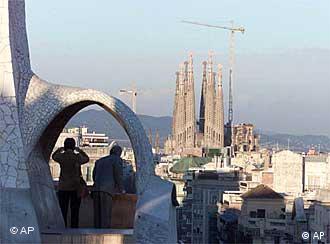 Catalan independence is a work in progress

Of the 700,000 people eligible to vote in ballots held across Spain's wealthy north-east, only 30 percent turned out to have their say. And what 95 percent of them said was 'yes' to making Catalonia an independent state.

The vote, dismissed as futile by the Spanish government, has no legal impact for the region which has its own language and already enjoys significant autonomy. Instead it was designed as a means of gauging the level of anti-Madrid sympathy prevalent among Catalan nationals and residents.

The coalition of Catalan nationalists which organised the ballot is hoping to stage another, larger-scale plebiscite in the capital, Barcelona, next year.

Members say they want the people of Catalonia, who were forced to turn their backs on their culture during 36 years under General Franco's dictatorship, to voice their opinion on a matter that the Spanish government doesn't want to address.

Speaking to the Reuters news agency, the spokesman for the referendum campaign Ureil Beltran said it had been "a powerful event" that would take the region with its population of seven million closer to independence.

Sunday's vote came as Spain's Constitutional Court prepares to rule on the legality of the region's statute of autonomy. The statute, approved by the Spanish parliament and endorsed by Catalan voters in a 2006 referendum, expanded the powers of the regional government.

A negative ruling from the Constitutional Court, however, is likely to fuel further separatist demands. That, in turn, could prove a problem for the country's Socialist prime minister, Jose Luis Rodriguez Zapatero, who has to hold Catalan regional elections by the end of 2010.

Spanish authorities are searching for the perpetrators of a bomb attack on Mallorca which killed two police officers on Thursday. It is the second attack in the country in as many days and has been blamed on ETA. (30.07.2009)

Young people in Spain suffer the highest unemployment rate in the EU. And the financial downturn has only served to widen the gaps between the have and the have-nots in an increasingly two-tier labor market. (11.10.2009)