Human Rights Watch has accused Nigerian soldiers and police of sexually abusing women in camps for those who have fled the insurgent group Boko Haram. HRW said poor camp conditions made the abuse easier to orchestrate. 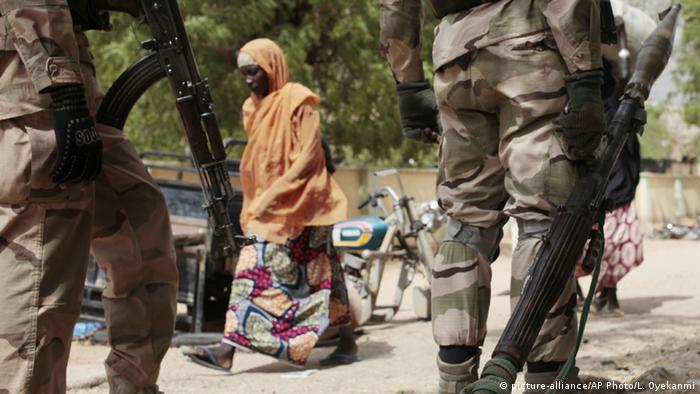 Human Rights Watch (HRW) said on Monday that Nigerian officials had been sexually exploiting women and girls at several camps set up for Boko Haram victims in the northeastern city of Maidiguri.

The group said the 43 cases of camp leaders, policemen, soldiers and vigilante groups carrying out "sexual abuse, including rape and exploitation" were documented in July.

"It is disgraceful and outrageous that people who should protect these women and girls are attacking and abusing them," Mausi Segun, senior Nigeria researcher at HRW, said.

Nigerian government officials have not responded to the allegations.

Eight of the women who spoke to HRW said they were previously abducted by Boko Haram fighters and forced into marriage before managing to escape to Maiduguri.

Thirty-seven of the victims said that they had been coerced into sex through false marriage promises and material and financial assistance. Four said they were drugged and raped. One 17-year-old girl said she was raped by a policeman in the camp after fleeing Boko Haram attacks in the town of Dikwa.

"I refused but he forced me," she said. "Soon I realized I was pregnant. When I informed him about my condition, he threatened to shoot and kill me if I told anyone else. So I was too afraid to report him."

HRW said limited supplies of food, medicine, and other essentials in camps made the camp's residents vulnerable to abuse and exploitation. "In some cases, men used their positions of authority and gifts of desperately needed food or other items to have sex with women," it said.

As many as 20,000 people have died and more 2 million have been displaced since Boko Haram launched an Islamist insurgency in northeastern Nigeria in 2009. A military operation by Nigeria and other states in the region has recaptured much of the group's territory and allowed aid groups to enter its former strongholds. In those areas, particularly northeastern Borno state, there are more than 50,000 children facing death by starvation without immediate aid, according to the UN children's agency. Another 250,000 are severely malnourished.

The United Nations children's fund has managed to free hundreds of children detained by the Nigerian army for suspected ties to Boko Haram. The militant group is fighting for dominance in the country's northeast. (28.10.2016)