Up to 80,000 children will die in northeastern Nigeria without much-needed humanitarian assistance, a senior UN official said. Boko Haram's insurgency has left tens of thousands dead, and millions more displaced. 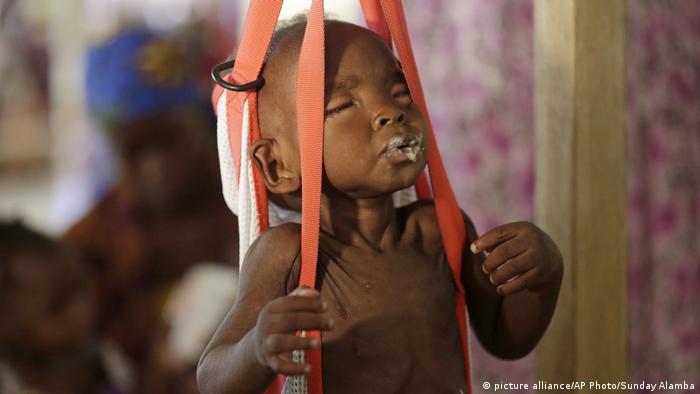 The UN agency has published a report on the dire conditions for the 250 million youths worldwide living amidst violence. Child marriage and trauma are just some of the consequences.

"If we don't engage in a much more comprehensive manner, including scaling up our emergency relief programs, what awaits us down the line is the biggest crisis facing any of us, anywhere," said Lanzer, who heads the UN's humanitarian division in the Sahel region.

The militant group's seven-year insurgency, aimed at establishing a so-called caliphate, has left at least 20,000 people dead and displaced more than 2.5 million people in the region.

The death toll is likely higher due to consequences of the conflict, including fatalities caused by severe malnutrition and lack of access to medical supplies.

'Anywhere except that of Syria'

However, UN authorities have received about $197 million, well below commitments from governments and international organizations.

"We're now talking about 568,000 across the Lake Chad basis who are severely malnourished, 400,000 of them are in the northeast of Nigeria," Lanzer said.

"We know that over the next 12 months, 75,000 - maybe as many as 80,000 - children will die in the northeast of Nigeria, unless we can reach them with specialized therapeutic food," the UN official added.

Nigeria's armed forces have pushed the militant group out of several of its strongholds, allowing humanitarian workers to access some affected areas, which Lanzer described as a catastrophe unrivalled "anywhere except that of Syria."

More than 6 million people are described as "severely food insecure" across the Lake Chad region, according to UN figures.

Children dying of starvation in Nigeria