The global coronavirus lockdown is making it hard for Mexican drug cartels to operate. With borders shut and limited air traffic, cartels are turning on each other. Sandra Weiss reports from Mexico City. 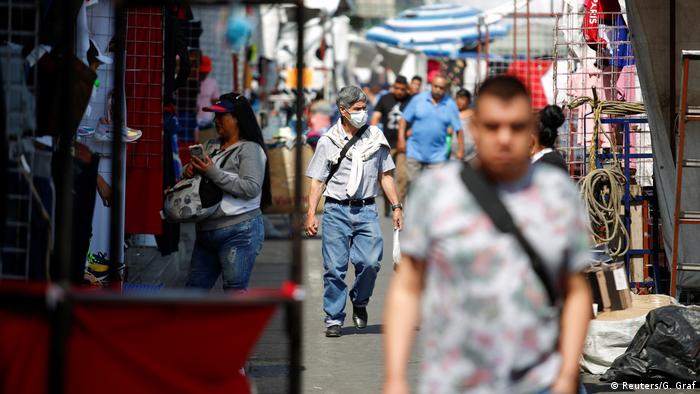 There's nothing you can't find on Mexico City's Tepito Market, locals say. In this maze of alleyways and stalls, you can buy anything from brand-name clothing, to flat-screen televisions, toys, glasses, drones, mobiles and much more. Wares produced in informal workshops are on offer, as are counterfeit consumer goods from China and even illegal drugs and weapons.

Tepito Market is controlled by a criminal gang called Union Tepito. And anyone wishing to sell products here must pay protection money. Each week, the mobsters rake in hundreds of thousands of pesos though this racket.

Usually, Tepito is hugely popular with shoppers due to its rock-bottom prices — even though buyers don't get receipts for their purchases, let alone warranties. But these days, there are just a few bargain hunters about. The supply of Chinese products started drying up two months ago due to the coronavirus lockdown. Speaking to Mexican broadcaster Televisa, local purse vendor Edson Navarro said that "because our middlemen have suspended flights to China, we're short on goods and making up for that with Mexican and US products."

Business has taken a hit, with sales down 50%. But the Union Tepito gang is still demanding vendors pay protection money, and has started abducting and even killing some of those refusing to comply. Mexican media have reported that some vendors are now calling on the municipality to dispatch the national guard to guarantee their safety. 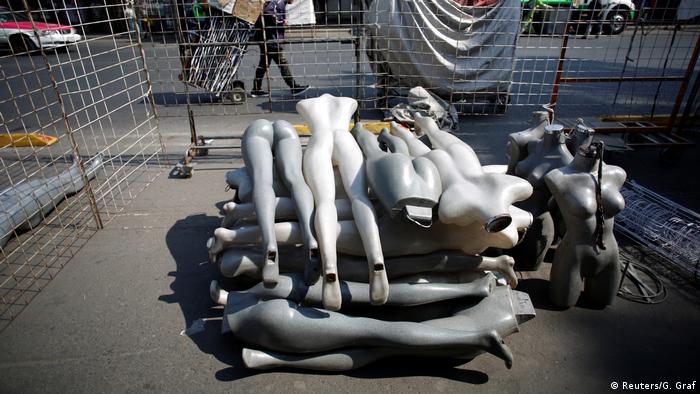 Vendors at Tepito Market are struggling, with sales cut in half for many

The lockdown has also dried up the supply of imported Chinese chemicals needed to produce synthetic drugs. Prior to the virus outbreak, for example, China's Hubei province was a major exporters of fentanyl, an opioid. But now, Mexico's big Sinaloa and Jalisco Nueva Generacion (CJNG) drug cartels are lacking the raw materials to produce drugs, as insightcrime.org reports.

According to Mexican weekly Riodoce, Sinaloa boss Ismael "El Mayo" Zambada has therefore hiked the market price for synthetic drugs. It reports that the price for 1 pound (just under half a kilogram) of methamphetamine, a stimulant widely known as crystal meth, has now shot up from 2,500 pesos (€95/$102) to 15,000 pesos.

Getting illegal substances into the United States has become much more difficult, too. "Five days ago was the last time we brought something across the border. Just three kilos," said a smuggler from Mexicali, speaking to blogdelnarco, a platform covering Mexican organized crime. "We have arrangements with border police and our smugglers know which borders posts to use. But now, many crossing have surprisingly been shut. That makes our business much more risky."

As many commercial flights have been canceled and air traffic has declined across Latin America, it has now become easier for authorities to spot planes carrying illegal drugs. Several days ago, for example, a light aircraft from Colombia carrying drugs was detected when it crash-landed in Honduras. The plane had been registered as an ambulance aircraft.

The repercussions of the coronavirus lockdown are making it increasingly difficult for Mexican drug cartels to operate, reports insightcrime.org. But the platform also says that "large organizations like CJNG, who operate in many illegal business sectors and regions, are finding it easier to adapt to these challenges and to withstand the recession."

Even though coronavirus-related news is dominating the headlines, this of course doesn't mean there have been fewer violent incidents in Mexico lately. On Tuesday, a hit squad mowed down a Veracruz journalist. And since Mexico introduced its first safety measures to curb the virus outbreak on March 23, 646 people have been murdered, according to official statistics. Last year, an average 95 individuals per day died a violent death in Mexico.

There has also been a rise in looting in recent weeks. And turf wars have broken out once more in Guerrero and Michoacan state between different drug cartels. Javier Oliva, a professor of political science at the National Autonomous University of Mexico, expects tensions between cartels to grow amid the coronavirus lockdown, and also predicts a spike in street crime and burglaries.

The tunnel runs more than 1.3 kilometers under the border wall between the US and Mexico and is equipped with an elevator. "We never really thought they had the moxie to go that far," one US official said. (30.01.2020)

Mexico had asked the US not to label cartels as terrorist groups due to concerns over sovereignty. The issue came to the fore after nine US-Mexican citizens were killed by cartel members in early November. (07.12.2019)

Avocados are all the rage right now, be it as a spread for bread or a face cream. In Mexico, drug cartels control a billion-dollar 'superfood' business and scare a whole region as Franz Viohl reports from Uruapan. (03.03.2020)

The Mexican government has defended releasing the son of Joaquin "El Chapo" Guzman after cartel gunmen launched an assault on the raid. Some worry the move will embolden cartels to resist future arrests more violently. (22.10.2019)

Mexican authorities have arrested two suspects after a sports utility vehicle filled with 10 dead bodies was left outside the state governor's office in Zacatecas.

The bullet-ridden bodies of the cartel members were discovered in the north-central state of Zacatecas. Earlier this week, two missing police officers were found hanging from a bridge in the same area.