How the Cologne Carnival will approach refugee issues | Germany | News and in-depth reporting from Berlin and beyond | DW | 26.01.2016

The Rhineland region is gearing up for the culmination of Carnival, also known as the "fifth season." Parade floats, comedians and sketches poke fun at everything - the mass arrival of refugees is no exception. 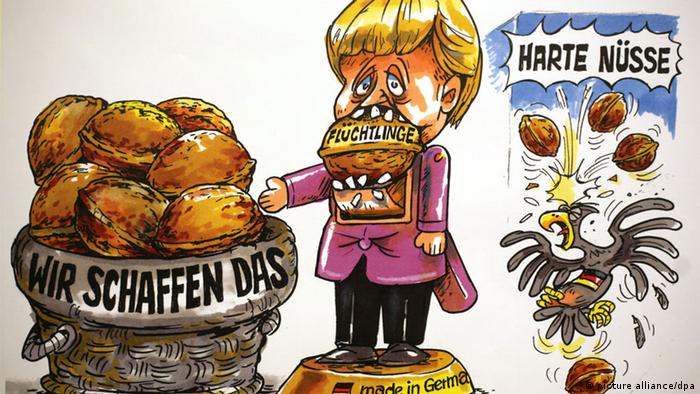 Every village, town and city in the Rhineland region celebrates Carnival, which kicks off in earnest on February 4, with almost a week of parades and costumed revelers partying on the street and in bars.

No matter how touchy or difficult a subject might be, it's bound to find its way into the Carnival sketches and themed parade floats that traditionally make fun of everything under the sun.

Including, in 2016, the mass arrival of refugees to Germany.

The above sketch for a new Cologne Rose Monday parade float shows a mournful Angela Merkel with a bowl of tough nuts waiting to be cracked, biting down on one labeled "refugees"- a reference to the chancellor's refugee policy, which has stirred controversy in Germany.

Local and national topics may bear the brunt of the mockery when the annual parade - which features more than 10,000 participants, horses, marching bands and 100 floats - starts winding its hourslong way through downtown Cologne on February 8.

The "Impaired Vision" float presents an effigy of the city peering dejectedly through shattered rose-tinted glasses - a garish paper mache barometer of public opinion after hundreds of thefts and sexual assaults on women on New Year's Eve, followed by the suspicion that authorities covered up the migration status of some suspects to avoid political blowback.

Whether the Düsseldorf parade will take a shot at the refugee situation remains a secret, Hans-Peter Suchand, press spokesman for the city's Carnival committee, told DW: "You'll have to watch the parade on Rose Monday to find out." 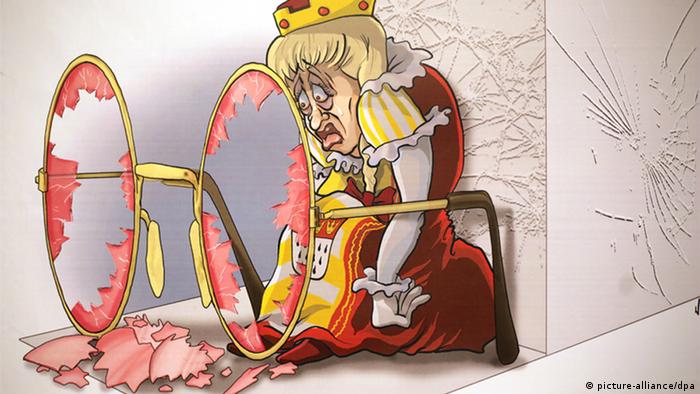 Cologne and its "Impaired Vision"

Unlike the Rhineland's major Carnival hotspots, the Hessian town of Fritzlar has banned all refugee-related topics from its annual parade, while the parade in the town of Rheinberg was canceled altogether for safety concerns.

Musicians have picked up on recent developments, too. "Our world is upside down," the Cologne band Höhner sings. "People are on their way, looking for a new home / No matter, where they're from or where they're going, it's a chance for all of us - so,welcome!"

This year, the "Stunksitzung," for example, will look at refugees.

A sketch has two old ladies invite a Syrian refugee over for Christmas, and after initial misgivings ("Next year, we'll just make do with a goose dinner again"), they find they actually have a lot in common with the asylum-seeker who lost his family on the boat ride across the Mediterranean Sea: The ladies were refugees during World War II. 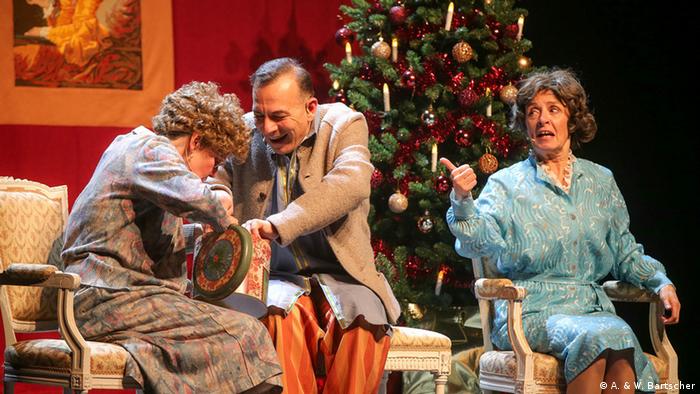 A shared history is discovered at Christmas

The members of the group that stages the "Immisitzung" are all migrants in the first place. "Migration is our central topic anyway," says member Joschi Vogel, adding that the group actually had to cut some of its refugee-related sketches from the program because there were too many.

Stand-up comedians booked for Carnival events are of two minds about the issue.

Some recommend against attempting to exploit every topic, suggesting that the audience doesn't want to be reminded of the news. "It's hard to tackle the refugee situation in a humorous way," Jupp Menth argued.

His colleague Knack Deuser took a shot at Germany's anti-migrant PEGIDA group, joking that "whenever I see a picture of one of their Dresden rallies, I ask myself, 'Where's the flood of the century when you need it?'" 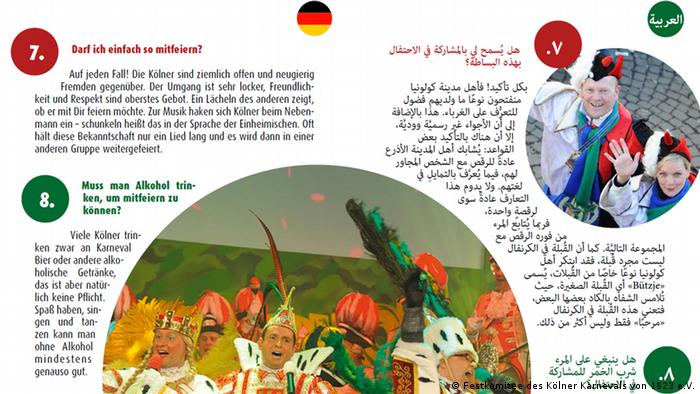 Carnival can be confusing to foreigners, so some German cities came up with a code of conduct

In light of the recent sexual assaults, the Cologne parade and celebrations will be closely watched. Police plan to increase security, with several hundred officers from outside the city backing up the local forces. Organizers are stepping up their radio communications network, and security bases manned by police, municipal officers and psychologists will be set up at focal points.

Several cities - including Bonn, Cologne and Mönchengladbach - are distributing flyers that explain the Carnival code of conduct in German and Arabic. Sensitive issues include behavior that all who take part in Carnival are sure to encounter on the streets and in the bars: excessive drinking, dancing and kissing.

More security at the Carnival

Feburary 4 marks the start of Cologne’s Carnival, an event that attracts over a million people. Following the large-scale attacks on women on New Year’s Eve, the city has invested 360,000 euros in boosting security. (26.01.2016)

A Salafist imam in Cologne has said victims of the New Year's Eve sexual assaults were partly responsible for the attacks. In a subsequent interview, Sami Abu-Yusuf has claimed his comments were "taken out of context." (22.01.2016)

Following the crime spree against hundreds of women that hit Germany during New Year's Eve revelry, Venice has decided to boost security for its upcoming carnival festival. (21.01.2016)