No camping, no costumes, no glitter or dancing: Despite coronavirus canning many live music festivals across Europe and beyond, many are finding creative solutions, from the digital to the DIY. 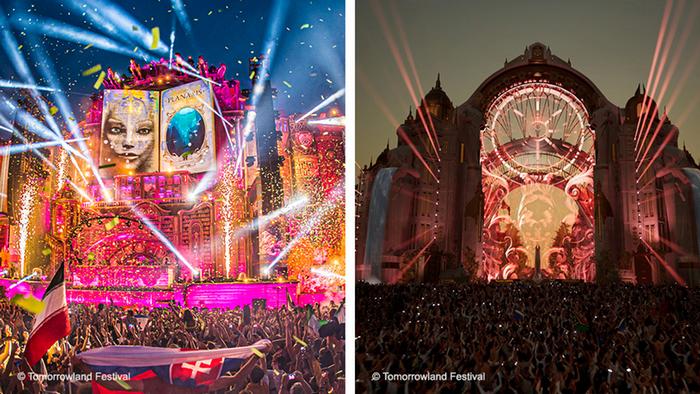 Katy Perry floats in the basket of a hot-air balloon over the crowd to the stage, her orange wig blowing in the wind as she waves at the spectators below. Cheers and screams of adulation wash around the main stage featuring numerous spires and two large waterfalls, a kind of Disneyfied, futuristic Neuschwanstein Castle. The pink headlights flicker as Perry starts to play her first song, "Smile," at the first purely digital edition of the Tomorrowland festival.

Perry's performance was recorded in a green screen studio and digitally transposed onto one of the eight stages on the butterfly-shaped virtual island of "Pāpiliōnem." The in-person version of Tomorrowland (above left), which usually takles place in Boom, Belgium, had to be canceled due to the coronavirus pandemic.

Ticket holders can explore the virtual festival island created for the online event (above right). Over the course of two months, around 200 employees animated a fantasy world with beaches, sunset, northern lights, 32,000 trees and 280,000 virtual people, some of whom wave flags, whistle and clap along to the performances.

Tomorrowland, one of Europe's biggest electronic dance music festivals, usually draws around 400,000 people. According to the organizers, more than one million festival guests have clicked on the virtual island. With a daily ticket costing only €12.50 ($14.70), the virtual solution has enabled many people around the world to visit the festival for the first time.

David Guetta plays to the crowd

Stars have taken great pains to record lively sets.  French DJ David Guetta says that while filming his set, he imagined that the 15 staff in the studio were the 100,000 fans he needed to get into the mood.

But the festival feeling is inevitably missing when watching the show on a laptop at home: The dynamic of thousands of celebrating people, the thumping of the bass in the pit of the stomach, the painted faces.

While it's not a perfect subsitute for a live event, Tomorrowland's innovative online edition is one of several creative solutions that major festivals have concocted to fill the hole created by the coronavirus closures this summer. 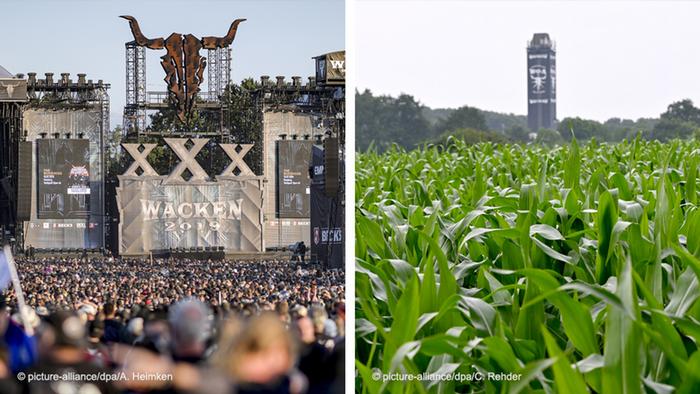 Germany's Wacken Open Air festival (left, in an earlier year) is one of the many music events that was canceled due to coronavirus, leaving the usual site bare (right)

The British Glastonbury Festival had planned extravagant celebrations for its 50th birthday in June. Some 135,000 tickets were sold within one hour. Instead, festivalgoers were limited to online videos of past Glastonbury editions. Some turned their home gardens and living rooms into festival sites.

The Roskilde Festival in Denmark challenged its fans to celebrate a "do-it-yourself festival" this year, offering instructions for handicraft art installations and posters, music playlists and recipe ideas. Meanwhile, the usual site of the festival's largest stage, which has featured bands such as the Rolling Stones and Muse, this year hosted a makeshift coronavirus test center.

Big festivals were also canceled beyond Europe. The Mawazine Festival attracts 2.75 million viewers to Rabat, Morocco, every year, making it arguably the biggest music festival in the world. It was called off this year without any form of replacement.

The Coachella festival in California, one of the most renowned music festivals in the world, was postponed from April to October before health authorities finally canceled the event completely.

As coronavirus cases continue to surge in the US, the Burning Man festival, in the Black Rock Desert of northwestern Nevada, and Chicago's Lollapalooza festival have also been called off. The latter will be replaced by a virtual event from July 30 to August 2, featuring performances and concert recordings of past years.

Small festivals at risk of folding

But the summer months are not only filled with big-name music festivals; Germany has a host of small local festivals that are an important cultural contribution in rural areas. According to a report by the associations of the German music industry, many festivals risk having to shut down because of coronavirus-caused financial losses.

Take the Haldern Pop Festival. It featured three bands when it launched in 1984 in the sleepy village of Haldern. In 2020, around 60 bands and solo artists were to perform at the award-winning indie festival. Roughly 7,000 total tickets had just about sold out when it became clear that large events, including Haldern Pop, would be prohibited in Germany until August 31. 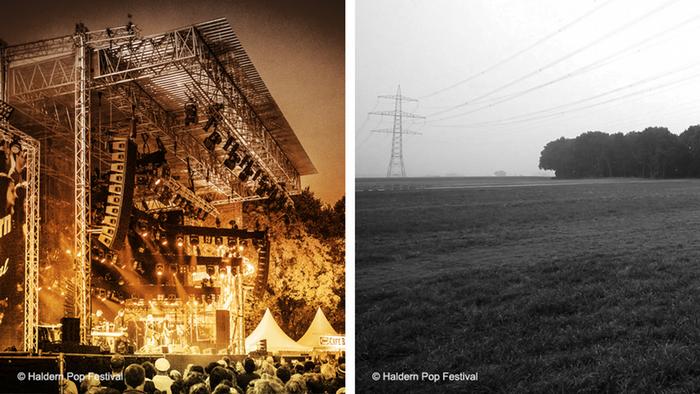 The usual crowds at the Haldern Pop festival (left) have had to stay at home this year, leaving the town noticeably empty (right)

In the face of a worldwide pandemic, concern about Haldern Pop was not first priority, festival co-founder and artistic director Stefan Reichmann said, but it was the most difficult moment in the festival's history.

Unlike Tomorrowland, Haldern Pop does not have 200 employees who can work out a solution. But with his core team of just a handful of people, Reichmann managed to organize a streaming concert. It is scheduled to take place on August 7 simultaneously in Haldern and Dingle, Ireland.

Most people who already had tickets donated either the entire ticket price or a part of it back to the festival. This has allowed the organizers to make ends meet until 2021. It's impossible to say what will happen after that, Reichmann said.

The survival of music clubs and festivals during the coronavirus crisis

Though COVID infection rates are sinking, prospects for the reopening of the events industry remain questionable. A few festivals are going ahead by using creative ideas.