How German police cadets learn to confront racism | Germany | News and in-depth reporting from Berlin and beyond | DW | 06.10.2020

German police are facing scrutiny thanks to a string of racist incidents.Berlin and other states are including anti-racism modules in basic training - but it's not standard yet.

And the lesson on racism starts. Buurman-Kutsal is an instructor for Diversity Works, an organization that offers racism awareness training, which in recent months has been getting more calls from German police forces.

Just being asked a question about your appearance, the instructor explains, can unnerve people, because it instantly changes the dynamics of an interaction. Suddenly there is judgment in the air.

This is the deceptively obvious premise of the blue-eyes/brown-eyes exercise, a lesson developed in 1968 by US teacher Jane Elliott that has since become an consistent element of diversity training.

The educator divides the room into a brown-eyed group and a blue-eyed group, and then assigns brown-eyed people special privileges. The result, after some difficult confrontations, is that potential police recruits hopefully feel what discrimination is like, and so end up confronting their own racism and understand how the mechanisms of privilege and exclusion affect their minds. 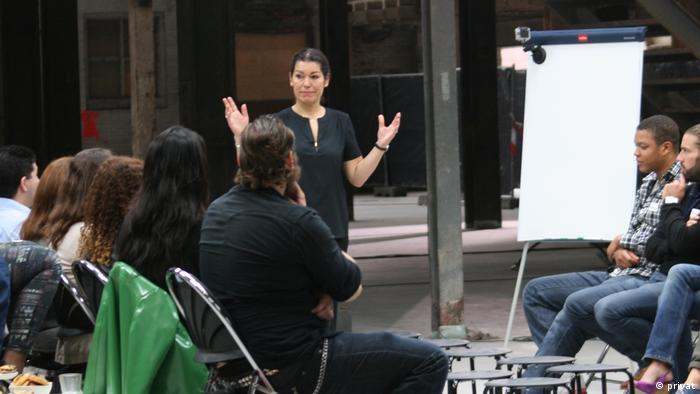 "It shows how easy it is to participate in it even without noticing" says Buurman-Kutsal, a German of Turkish background who teaches in the Netherlands and Belgium and once specialized in inter-cultural training for young people.

The workshop she runs with police cadets in the state of Schleswig-Holstein lasts for a whole week of 8-hour days. It covers a lot of ground, discussing everything from what the police is actually for, to ethnic profiling, to how to deal with other officers who make racist remarks.

"It's not always easy, because we're dealing with a police that has a culture of solidarity – and this isn't just in Germany – which makes it very difficult for them to confront each other," she told DW.

It's not hard to get a measure of how important this is in Germany: The police's struggles with racism and far-right sympathy in the ranks has become more and more public in recent months as unpleasant stories converged in the press.

Last week, the Berlin police was forced to admit mistakes in an investigation of a far-right crime spree in its Neukölln district, with victims complaining that the chief suspects – three known neo-Nazis – felt safe enough to publicly taunt officers keeping them under surveillance.

A week earlier, the police in Essen, North Rhine-Westphalia, was criticized for publishing a training brochure on Arabic organized crime in the region that allegedly included racist slurs. According to Die Welt newspaper, the 20-page manual informed cadets that members of the Arab "clans" were afraid of dogs and considered female officers "provocative factors." The Essen police, however, said it saw no reason not to use the document, and that it reflected the results of an academic study.

Former police cadet Simon Neumeyer told DW that he left police school in Saxony because he was so shocked by how open racism was during the course. One shooting instructor told him: "We need to learn to shoot better because there are so many refugees coming to Germany." (In response, the Saxony police said "no evidence has been established of unprofessional behavior.")

The case that has caused the most national consternation was the discovery of five large far-right WhatsApp police chat groups in North Rhine-Westphalia, which shared pictures of Adolf Hitler and images of asylum-seekers in gas chambers.

The case resulted in the suspension of 29 officers, but it did not spur Germany's conservative Interior Minister Horst Seehofer to change his mind about blocking a study on racial profiling in the police as a whole. Racial profiling was banned, he argued, and anyway the NRW case showed the police was actively rooting out "rotten apples."

That reflects a wider problem, according to some critics: The failure to link incidents of egregious racism with a deeper and wider problem in police culture.

But Buurman-Kutsal says things are changing. "Germany can't get round the issue at the moment, and is certainly catching up," she said. "When I started working with the police in the Netherlands eight years ago, it wasn't really on the agenda in Germany at all." 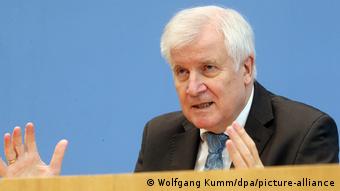 "I can't say whether the police in Germany has a fundamentally right-wing culture – I don't think so, but it absolutely has a problem," she added. "But I think very few of them talk about it, and that's why there is a problem. These are certainly not isolated cases. We know from many officers that it is difficult to confront the issue."

There are 17 separate police forces in Germany, one for each of the 16 states and the federal force, and diversity training is far from standard: While the Berlin force has been training anti-discrimination in the police since 2009, and Schleswig-Holstein has also adopted "multicultural competence" in basic police training, other states don't address the issue formally at all. Neumeyer said the issue certainly never came up while he was at the school in Saxony.

But Buurman-Kutsal says police forces in other states have contacted Diversity Works, including Saxony. "It's developing at the moment - they are thinking very much about how to train officers around the issue of racism," she said. "But it's not normal yet."

And there is evidence of interest in the rank and file. She has had individual officers come to workshops of their own accord, and some of those police cadets who did the brown-eye blue-eye workshop even asked for more help after the workshop was finished.