How German photographer Peter Lindbergh kicked off the supermodel era

Star photographer Peter Lindbergh, who overturned the glossy standards of fashion photography, and who was seen as the "father" of supermodels such as Cindy Crawford and Naomi Campbell, has died at the age of 74. 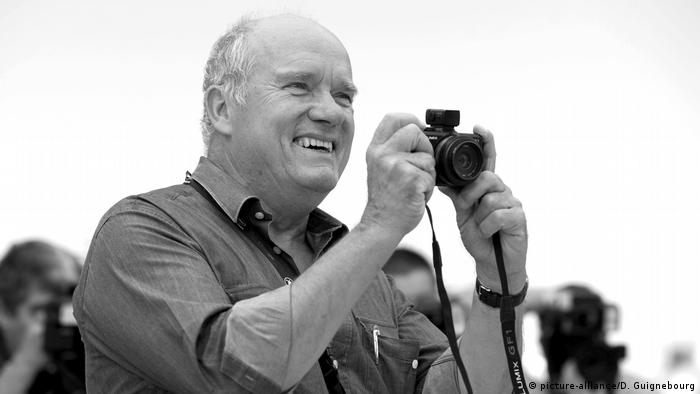 Considered one of the most influential fashion photographers of the past 40 years, Peter Lindbergh has died aged 74, his studio in Paris confirmed on Wednesday. The circumstances of his death were not provided.

Even though he worked with the world's top stars, the photographer refused "to bow to glossy perfection," British journalist Suzy Menkes once said of him, adding that the trademark of his images was that they looked "into each person's unvarnished soul, however familiar or famous the sitter."

A youth on the move

Peter Brodbeck (his civil name) was born on November 23, 1944 in Leszno, in then German-occupied Poland. After the war, his family was expelled to Germany. He grew up in the industrial town of Duisburg in North Rhine-Westphalia.

At the age of 18, he moved to Switzerland, and from Lucerne he went on to live in Berlin, where he took classes at the Academy of Fine Arts.

Yet he didn't stay chained to the art school's program for very long, preferring to head out to Arles in France, to explore the region that had inspired his idol, Vincent Van Gogh. After months there, he hitchhiked around Spain and Morocco. 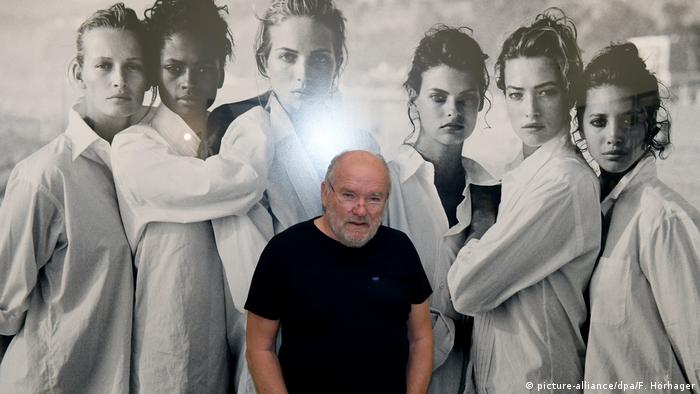 At the opening of the exhibition "Peter Lindbergh: From Fashion to Reality" in Munich in 2017

Two years later, he returned to Germany and studied Abstract Art in Krefeld. His conceptual art was noticed even before he graduated, and he was invited to show his work at an avant-garde gallery.

He started focusing on photography at the beginning of the 1970s, first working as an assistant and then opening his own studio in Düsseldorf in 1973.

His breakthrough came five years later with a series for Stern magazine, joining the magazine's family of photographers alongside legends of the trade such as Helmut Newton, Guy Bourdin and Hans Feurer.

Read more: Why pioneering photographer Adolf de Meyer is the 'Debussy of the Camera' 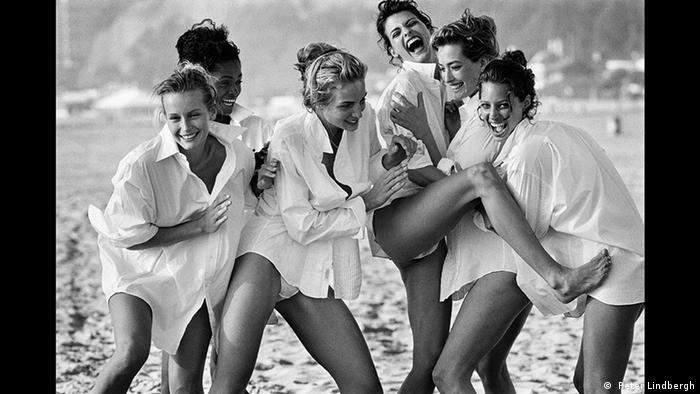 His "White Shirts" series was also on show at the exhibition "Peter Lindbergh. From Fashion to Reality"

Lindbergh created in 1988 a series of portraits of new models together on a beach in Malibu, all dressed in white shirts and in a natural look. At the time, big-makeup, big-hair studio shoots were rather in trend.

The shoot had been commissioned by British Vogue magazine, but the clean look of the photos didn't satisfy the editor at the time, and the pictures were tossed. 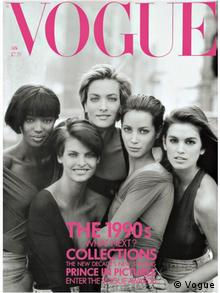 The iconic cover, also known as "the birth certificate of supermodels"

It was Anna Wintour, who became editor of the magazine a few months later, who rediscovered the shots and hired Lindbergh for her first cover, the January 1990 issue. The models it featured would become some of the biggest names in the industry: Linda Evangelista, Naomi Campbell, Tatjana Patitz, Cindy Crawford and Christy Turlington.

Pop singer George Michael was then inspired by Lindbergh's shots and invited the same models to feature in the video for his song "Freedom! '90." Gianni Versace also had the models present his new collections on the catwalk, anchoring the era of celebrity supermodels.

"I never had the idea that this was history," Lindbergh told British newspaper The Guardian in 2016. "Never for one second ... I didn't do anything, a bit of light. It came together very naturally, effortless; you never felt you were changing the world. It was all intuition."

Against the 'terror of perfection'

Going against the artifices of high fashion, Lindbergh had a realist approach influenced by documentary and street photographers. He would portray his subjects in their natural state, without excessive make-up and Photoshop corrections.

"A fashion photographer should contribute to defining the image of the contemporary woman or man in their time, to reflect a certain social or human reality. How surrealistic is today's commercial agenda to retouch all signs of life and of experience, to retouch the very personal truth of the face itself?" Lindbergh once asked magazine Art Forum.

"There is no beauty without truth. All this fake making up of a person into something that is not them cannot be beautiful. It is just ridiculous," he said at the launch of his 2017 Pirelli calendar. Lindbergh was the first photographer to be commissioned to create portraits for three editions of the iconic calendar in its 50-year history. His feminist-friendly approach for the 2017 calendar featured stars in their 70s, such as Helen Mirren and Charlotte Rampling, as "a cry against the terror of perfection and youth."

He also directed various films and documentaries, including Inner Voices (1999), which won the best documentary award at the Toronto Film Festival in 2000. He was the photographer behind many music covers, including for Tina Turner, Lionel Ritchie and Beyoncé.

The influential photographer remained active up to the end. For the September 2019 British Vogue magazine, he collaborated with Meghan, wife of Britain's Prince Harry, who was the guest editor of that issue. The cover featured his portraits of 15 women embodying "Forces for Change," including climate activist Greta Thunberg, actress Jane Fonda, primatologist Jane Goodall and New Zealand Prime Minister Jacinda Ardern.

He had also been active on social media, and his death was confirmed on his Instagram page with the message: "He leaves a big void."

The Berlin show "Women on View" examines how photographers like Helmut Newton have depicted women as objects of desire. Despite today's gender rights movements, advertising remains in the Dark Ages of gender cliches. (01.02.2019)

Despite self-described shyness, the German schoolgirl once teased for her long legs rose to become a top supermodel. A new book gathers Schiffer's best photos together and celebrates her iconic career. (21.08.2017)

As this season of Germany's Next Topmodel comes to a close, we look at how Heidi Klum's impressive career has allowed the German-born supermodel to become a global star and powerful businesswoman. (24.05.2018)