How do you insure yourself against climate change? | Business | Economy and finance news from a German perspective | DW | 22.07.2021

How do you insure yourself against climate change?

Wildfires in Australia, blizzards in Texas, now flash floods in Germany, Belgium and the Netherlands: The growing likelihood of extreme weather has insurers and homeowners alike wondering how to best manage risk. 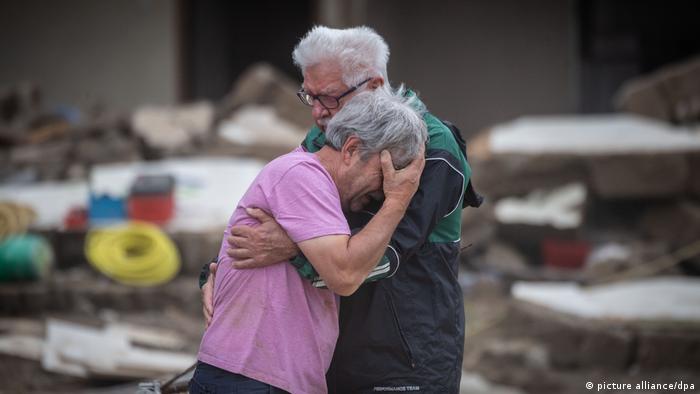 How can homeowners and insurers best protect properties in an increasingly unpredictable climate? Two brothers embrace after having lost their family home to catastrophic flooding in Altenahr, Germany

Many people in Germany were blindsided by the heavy rains and deadly flooding that hit parts of the country in mid-July. Now, as homeowners take stock of the damage, a second shock could be in store when they seek their insurance payouts.

Homeowner's insurance in Germany covers water damage; however, not if it's caused by heavy rains or natural flooding. For this, property owners need to purchase special coverage.

Such caveats, which are also the norm in many places besides Germany, pose problems in a world where unpredictable weather is becoming the norm. Higher global temperatures can lead to increased precipitation, making floods more likely.

Insurance against severe weather is an "urgently needed" addition to standard homeowner's insurance, said Sascha Straub, a finance lawyer working for a consumer consultancy in Bavaria.

"The damage that water can cause is so immense that it can ultimately be a complete economic disaster for the individual," Straub told DW. "And now we see the likelihood that it will also affect those who haven't had to reckon with water before."

The cost for this supplementary coverage varies by location and type of property, Straub explained, and can range from 30% to as much as 300% of a standard homeowner's insurance policy for the most at-risk properties. Less than half of insurance holders in Germany have currently opted in to such extra coverage.

Who should pay for coverage?

Not everyone is ready to accept this cost, in particular not those who might need it most.

"Insurance becomes less attractive for high-risk households or farmers when premiums reflect the underlying risk," the European Commission wrote in a 2018 report on insurance and climate change. "Although lower-risk policyholders have a weaker incentive to reduce risk, they are more likely to buy insurance since premiums are more affordable."

Yet those who opt out are rolling the dice. And in the event of a natural disaster, the state could also be expected to jump in. The German government has already promised swift aid to those affected by the floods.

But getting even such federal emergency aid can be problematic. In Bavaria for example, only people who can prove that they tried and failed to get coverage can receive aid from the state, according to a report in the newspaper Frankfurter Allgemeine Zeitung. It is also questionable to what extent such aid can cover the immense costs of reconstruction.

And beyond that, is it fair to stick individual homeowners with the costs of insuring against increasingly erratic weather? This is the question insurers and regulators are currently trying to address.

Our changing climate poses a conundrum for insurance companies, whose business model relies on their ability to quantify the risk of an event happening and bear the cost should it actually occur. This translates into collecting enough money in premiums to cover the cost of claims. And managing this won't be as simple as raising premiums to reflect higher risk.

"We are in a world where risk is just increasing day to day because more carbon is going into the system," Dickon Pinner, a senior partner at the global consulting firm McKinsey, said in the firm's podcast Reimagine Insurance. "So just transferring that risk is insufficient."

The growing unpredictability of extreme weather events makes it more difficult for insurers to assess risk. And historic measures are no longer the reliable indicators they once were.

"The changing nature of climate risk means that the likelihood of these events actually repeating in central Europe over the next 50 years will increase sevenfold," said Antonio Grimaldi, another McKinsey partner, in the podcast, speaking about the severe droughts seen recently in Europe.

What these changes mean for insurance premiums in the short and long term is unclear. A higher likelihood of devastation could mean insurers raising prices to reflect the increased risk. But prices going too high could discourage people from getting coverage just when they need it most.

On the other hand, a growing sensitivity to the risks of climate change might push more people to insure their properties against catastrophic weather.

"The more people who take out insurance, the lower the cost to cover damages, and the greater the scope for insurance companies to calculate premiums," said Straub. For this reason, he believes catastrophic weather insurance should be compulsory.

In the wake of the floods, Germany's left and center-left parties as well as the Federation of German Consumer Organizations (vzbv) have called for catastrophic weather insurance to be made mandatory. They added that it's the duty of the insurance industry to provide homeowners with affordable policies to protect themselves against extreme weather.

With a business model that relies on predictability, insurers also have an incentive to use their special role in society to shepherd the transition away from carbon-based energy sources, experts believe.

"At a macro scale, this is about massive capital allocation and reallocation," said Pinner. Insurers can send price signals through by diverting capital away from risky assets such as fossil fuels, he continued.

In its report, the European Commission has suggested many ways the industry might help restore stability. Insurers' data and knowledge could be tapped to help develop better building code regulations based on their assessment of an area's risk. Or, insurance policies could include clauses that require damaged buildings to be repaired to a higher standard than previously accepted, reducing the risk of future damage.

But until such changes are put into place, people will have to prepare the best they can for weather that is becoming increasingly harder to predict.

"It is not possible to plan where the next flood or landslide will occur," said Straub. "Anyone could be affected. The more people who pay into the insurance pot, the easier it will be, and the cheaper it will be for everyone in the long run."

Global warming, a weakening jet stream and the moon will combine to cause more devastating heat waves and floods in the coming decades.

German floods: Could the fatalities have been prevented?