Seventeen years ago, the September 11 attacks in New York and Washington, DC, shook the United States. The tragedy has often put strain on relations between the US and Saudi Arabia. 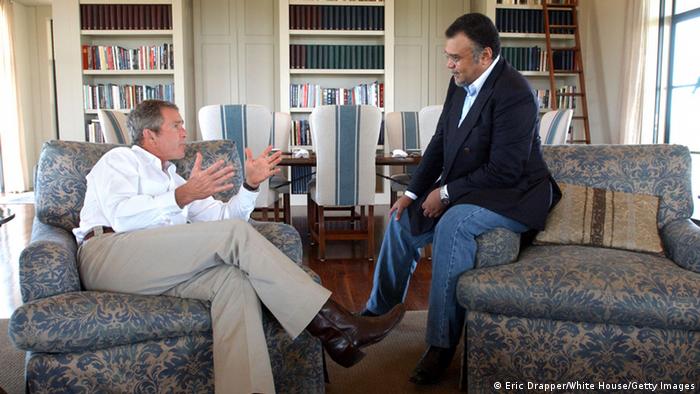 Presient George Bush meets with Bandar bin Sultan, the Saudi Arabian ambassador to the US, in 2002

After the September 11, 2001, terror attacks on New York City and Washington, DC, the US's relations with Saudi Arabia, a longtime ally, faced unprecedented tension. Fifteen of the 19 men who hijacked the four planes that crashed into the Pentagon, the World Trade Center and a field in Pennsylvania were Saudi citizens. The United States began exerting pressure on the country to shut down charities and organizations that could be funneling money to terrorist groups outside of the kingdom, such as al-Qaida.

In 2016, the US Congress passed the Justice Against Sponsors of Terrorism Act (JASTA),  which allows citizens to sue foreign states for damages, death or injuries from terrorism. Although the law doesn't mention Saudi Arabia, it would theoretically allow the families of the victims of the September 11 attacks to sue the kingdom. Barack Obama, the US president at the time, had tried to convince Congress not to pass the law, saying he feared it would make citizens vulnerable to lawsuits should other countries take similar measures. Yet, it was enacted into law anyway after Congress overrode his presidential veto. This caused tension between the Saudi leadership and the Obama administration.

Now, with the administration of President Donald Trump, the Saudis are hoping for a clean slate. "It was surprising that the Saudis have, on an official level, been relatively quiet on the JASTA law," said Sebastian Sons, a research fellow in the Middle East and North Africa program at the German Council for Foreign Relations. "The Saudis don't want the global community to focus on JASTA. They are trying to convince the Trump administration that it is not a real issue and business can go on as usual."

The relationship between the US and Saudi Arabia "is now probably as good as it's really ever been," Trump said in March when Prince Mohammed bin Salman visited the White House. The US has already promised Saudi Arabia more military sales, while demonizing Saudi Arabia's rivals such as Iran and Qatar.

Socioeconomic factors such as youth unemployment and inflation are becoming major issues in societies such as Saudi Arabia's, however. "Governments can no longer calm down their people," Sons said.  He said the  high level of joblessness and frustration in Saudi Arabiahelps terror groups recruit. "People are growing tired of corruption and nepotism among the elites and this falls right into the hands of IS and al-Qaida" he said, referring to the "Islamic State." Extremist groups offer disillusioned, unemployed youth in countries like Saudi Arabia a way to earn a living and fight for a cause. This disillusionment is what causes radicalization, Sons added.

Mike Pompeo is set to lead the State Department as the US navigates a series of stormy foreign policy issues. Will the CIA director and hawkish former Republican congressman be the hard-line diplomat Donald Trump seeks? (13.03.2018)

President Barack Obama has publicly acknowledged that a US drone strike killed two Western aid workers. But hundreds of civilian deaths in similar strikes across the Muslim world remain shrouded in official secrecy. (24.04.2015)

Faced with stalled reforms and widespread unemployment, Tunisians are left with an increasingly desperate situation at home. Have the post-revolution struggles been in vain? Benas Gerdziunas reports from Tunis. (01.04.2018)