The United States has announced military deals worth $110 billion with Saudi Arabia. President Donald Trump is at the start of an eight-day tour that will take him to Riyadh, Jerusalem, the Vatican and European capitals.

The $110-billion (around 100 billion euros) deal for Saudi purchases of US defense equipment and services was one of several deals announced during Trump's visit to Saudi Arabia.

The military sales deal is effective immediately, with another $350 billion set of deals to kick in over the next 10 years.

"This package of defense equipment and services support the long-term security of Saudi Arabia and the Gulf region in the face of Iranian threats," a White House official said when announcing the deal.

"We now stand together to thwart our common enemies, to strengthen the bonds between us and to chart a path towards peace and prosperity for all," the leaders said in a joint declaration.

US conglomerate General Electric also announced it had signed agreements and memorandums of understanding worth $15 billion with the oil-rich kingdom.

Trump was kept away from reporters during a busy day of meetings and ceremonies, but late in the day he said the deals reached would lead to "tremendous investments" in the US. He said the deals will also create "jobs, jobs, jobs."

Russia and Iran - allies with Syria against the US-Saudi Arabia axis in the region - this year signed a large arms deal. The US-Saudi deal comes amid talk of a possible reconfiguration of Middle East alliances, and possibly global ties.

For Riyadh, the visit is an opportunity to rebuild ties with a key ally, strained under Trump's predecessor Barack Obama, who Sunni Arab Gulf states suspected of a tilt towards their Shiite regional rival Iran. 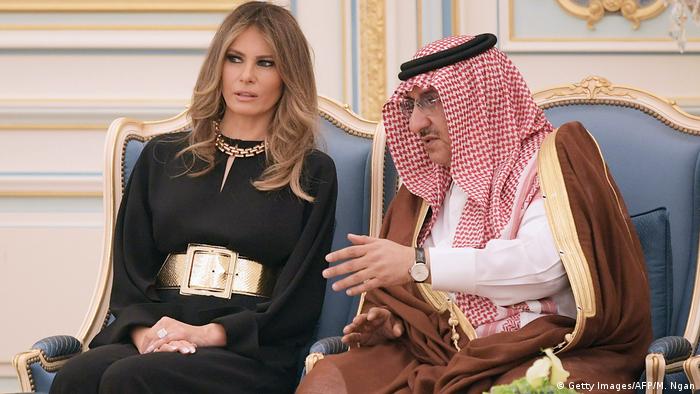 No gaffes, so far

After a welcoming coffee ceremony, Trump and his entourage were brought to the royal court where the president was awarded the Collar of Abdulaziz Al Saud, Saudi Arabia's highest civilian honor.

The streets of Riyadh were lined with US and Saudi flags and billboards featuring Trump and King Salman.

Trump is meeting the kingdom's two powerful crown princes on Saturday, before giving a speech on Islam to leaders of Muslim countries on Sunday.

US first lady Melania Trump did not wear a headscarf when she arrived on Saturday along with her husband.

Tel Aviv on the table

Trump is set to visit Israel on Monday and the occupied Palestinian territories on Tuesday. This next leg will be more complicated, despite the history of warm ties between Trump and Prime Minister Benjamin Netanyahu.

A key issue will be the fate of the US embassy, which Trump signaled he would move from Tel Aviv to Jerusalem.

A senior Palestinian official said on Saturday this would be a deal-breaker for the Palestinians.

"We believe that moving the US embassy to Jerusalem would mean the end of the peace process," Saeb Erekat, second-in-command of the Palestine Liberation Organization (PLO), said days ahead of Trump's visit to the region.

Erekat added that a Palestinian state without east Jerusalem as its capital would have "no meaning."

The new US ambassador to Israel, David Friedman, has also backed the move - though there has been no movement so far on the pledge.

Israel occupied the West Bank and east Jerusalem in 1967 and later annexed the east of the city in a move never recognized by the international community.

At talks between the two leaders, King Salman was overheard lamenting the Syrian war to Trump.

"Syria too used to be one of the most advanced countries. We used to get our professors from Syria. They served our kingdom. Unfortunately, they too brought destruction to their own country. You can destroy a country in mere seconds, but it takes a lot of effort," he said.

Trump's response could not be heard.

Trump's woes at home mount as he travels abroad

As President Donald Trump arrived in Saudi Arabia for his first foreign tour, US media reports have kept the focus on his White House and relations to Russia. Senators say fired FBI head Comey will testify in Congress. (20.05.2017)

Saudi Arabia's defense minister has accused Iran of fostering sectarian violence, saying they "wish to dominate the Muslim world." On Yemen, the prince said "long war is in our interest" despite a humanitarian crisis. (03.05.2017)

Trump has arrived in Saudi Arabia

Trump orders withdrawal of most US troops from Somalia 20m ago

US House votes to decriminalize marijuana, little chance in current Senate 2h ago