The art installation of 299 trees in a stadium aims to draw attention to the fragility of forests, but right-wing populists misappropriated the project for their election campaign. DW asked artist Klaus Littmann why. 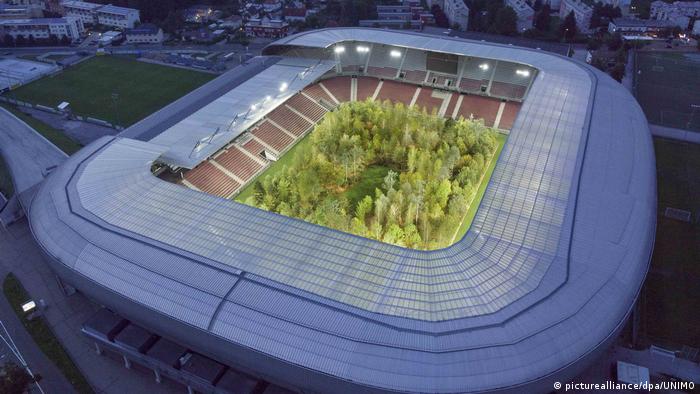 In the Austrian city of Klagenfurt, 299 trees have been installed on the pitch of a football stadium for a temporary artwork titled For Forest, by Swiss artist Klaus Littmann.

Even though forests are burning in the Amazon and the global climate emergency makes headlines every day, the issues behind the art installation became secondary when members of the right-wing populist parties Alliance for the Future of Austria (BZÖ) and Austrian Freedom Party (FPÖ) started criticizing the project, wrongly claiming that it had been taxpayer-funded. After they called on protesters to show up with chainsaws at the opening on September 8, the stadium has since been guarded day and night.

Built for the European Football Championship in 2008, the stadium is seen as the legacy of Jörg Haider, the long-time far-right leader of the FPÖ and later chairman of the breakaway party BZÖ, who died in October that same year.

The 30,000 seats of the stadium are rarely filled today; it is mainly used by the second league football club Austria Klagenfurt, which attracts a few hundred fans. For the duration of the installation, the club is to play in a neighboring stadium.

For Forest is inspired by the painting The unbroken attraction of nature by Austrian artist Max Peintner. It expresses the idea that "nature, which we now take for granted, might someday only be found in specially assigned spaces, as is already the case with zoo animals," states the project's website.

Read more: The myth of the wild German forest 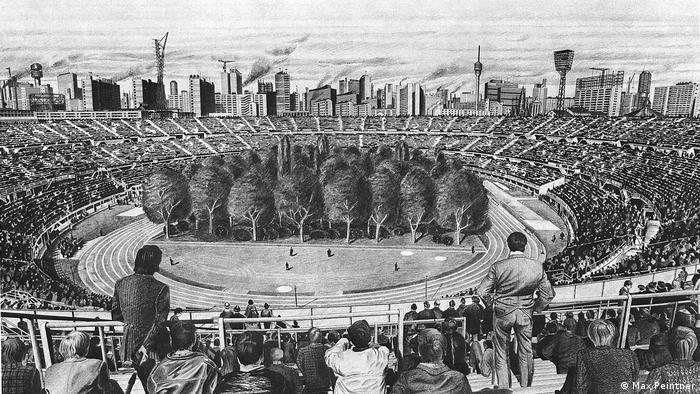 "The unbroken attraction of nature" by Austrian artist Max Peintner

DW talked to the initiator of the project, Klaus Littmann.

DW: Mr. Littmann, there have been massive protests in the run-up to your art project. How has the situation developed since the opening of the public installation?

You have to keep in mind that there's an election campaign [in Austria], which is why a certain party exploited the project. But now, fortunately, things have calmed down and you can safely go to the stadium.

You were insulted and physically attacked ahead of the opening, and that shifted the focus from the artwork itself...

That was the problem. I had not previously experienced such reactions. Meanwhile people have come to thank me and talk about the project. The reactions are still bitter on social media though, where it's obviously easier to lash out.

BZÖ and FPÖ have claimed that taxpayers' money was wasted on the project, even though it was completely funded by donations. Why couldn't the facts cool the debate?

In the middle of the project, there's Sunday's upcoming election. Representatives of these parties were asked if they'd go see this installation and they said: No! And it was apparently impossible to eradicate the falsehoods they kept chanting like prayers. 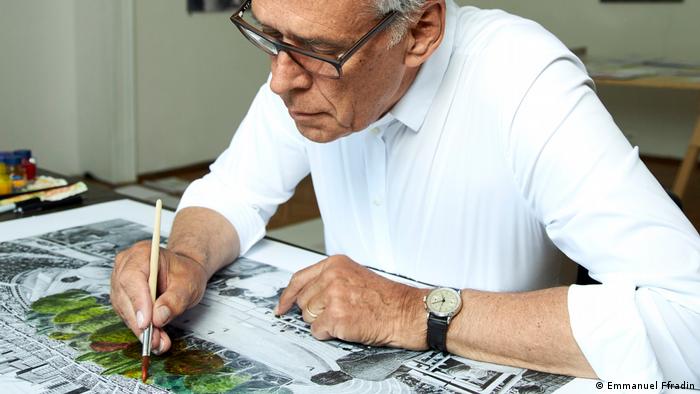 The trees didn't suddenly appear in the stadium. There were six years of planning for the project, and you signed contracts with the city in 2017. Was the project already criticized during this phase?

I have been coming here for six years, and three years ago, Mayor Mathiaschitz said she was in favor of the project. That's when claims that it would be financed by taxpayers began. Meanwhile Wolfsberger AC, a club from the region, slipped into the Europa League and suddenly wanted to use the stadium for their games. But of course that was no longer possible because our project was already well underway. Political parties picked that up and instrumentalized the issue in their election campaigns.

The stadium is seen as the legacy of the late right-wing populist Jörg Haider. Still your project is privately funded and admission is free, so no one is excluded from the show. How do you explain the strong rejection of the project?

I think it has a lot to do with the history of this stadium. The city is still indebted because of it. The stadium cost nearly €100 million and the population is still paying for it; it's still an extreme burden on the city budget and for the citizens. That has always been a contentious political issue. That's why the rejection of my project has nothing to do with the installation in terms of content. It's rather because the governor and the mayor are both of the Social Democratic Party (SPÖ). I directly asked the woman in charge of arts and culture at the FPÖ what her party had against my project, and she replied that it was simply because they were in the opposition. 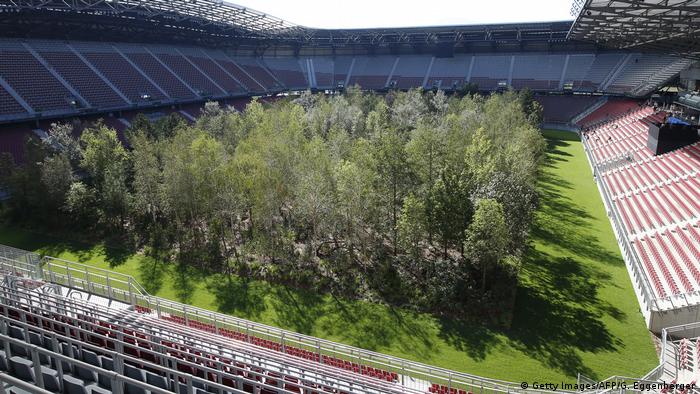 "For Forest" is the largest public art installation in Austria ever

Forests around the world are burning and dying; your installation is very topical. How do you feel as an artist that the issues addressed by your project became secondary through the debate?

That's what happening on a local level, but worldwide the environmental issues remain the main focus. Art projects are always political as well. This project contains an incredible number of different topics that are expressed in artistic forms: the forest, trees, nature. I have been working on this idea for 30 years, and the fact that it landed right on the dot amid this whole climate discussion feels a bit eerie to me. The installation has really turned into a contribution to the current debate.

I am producing a radical image through relatively simple means: by taking something and setting it in a new context, it challenges people's perception. I want them to reflect on how they deal with nature.

You were inspired by an illustration by Max Peintner from 1971. At the time, it seemed like distant dystopian vision, just like Orwell's 1984 or Huxley's Brave New World when they were first published. Did you already believe at the time that his work would actually reflect our world so closely?

I first saw the picture 30 years ago and was fascinated by Max Peintner's vision that one day we would only be able to view nature in assigned locations, in crater-like buildings. The wonderful title of the painting, The unbroken attraction of nature, expresses a longing. And I'm not ruling out that the world could further evolve in that direction.

The installation For Forest can be seen until October 27, 2019 at the Wörthersee Stadium in Klagenfurt. Admission is free.

Klaus Littmann is a Swiss gallery owner, curator and artist. From 1970 to 1976 he studied at the Düsseldorf Art Academy, among others with Joseph Beuys.

The head of the Green party in Lower Saxony has walked back comments on banning balloons for environmental reasons. One lawmaker has accused the state party pushing away voters with "ecological radicalization." (12.09.2019)