How a German hospital uses TikTok to recruit new talent | Business | Economy and finance news from a German perspective | DW | 26.11.2019

How a German hospital uses TikTok to recruit new talent

Nursing staff is in short supply in Germany. To beat the competition, one clinic has turned to TikTok and other social media platforms to win over new talent — and applicants are responding. 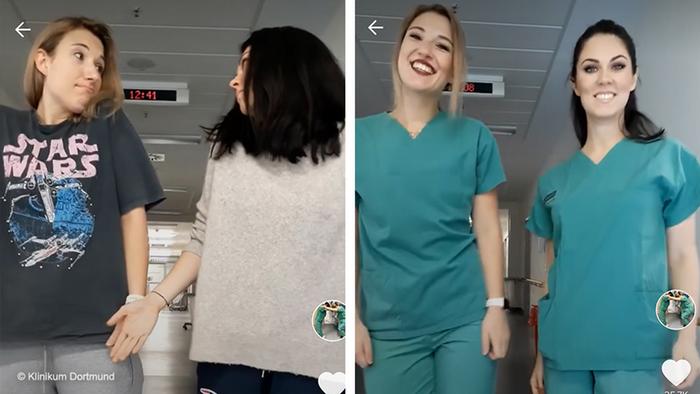 A popular meme on TikTok is a before/after video to a song featuring a surprising new look.

Skeleton dances, stethoscope karaoke and reanimating rubber chickens are the things we may suspect our doctors do when we're not looking, but rarely do we get a chance to catch them at it. Well, the guessing game is over, because now they are doing it in plain sight!

For some health practitioners at Klinikum Dortmund, a municipal hospital in the western German Rhine-Ruhr metropolitan region, these activities are actually part of their official job. And wow, they can really dance.

On the hospital's TikTok account, they squeeze their disinfectant bottles to iconic 80s electronic music beat "Pump up the Jam," dance to country tunes, or, well, reanimate a rubber chicken playing "Staying Alive." They are typical performances for the platform that features people lip-syncing their favorite songs or showing off their creativity.

Not all patients are enthusiastic about the new vibe. "That's why we always have to wait so long," some users complain, but the majority response is positive. Still, isn't that a lot of work for doctors to get a few (million) likes?

The key audience is not patients, but other health workers and hospital staff. "We get all our trainees through our social media activities," says Marc Raschke, head of communications at the clinic. It always comes up at job interviews. He created the TikTok channel in the spring of 2019 after he learned about it at a conference in New York. 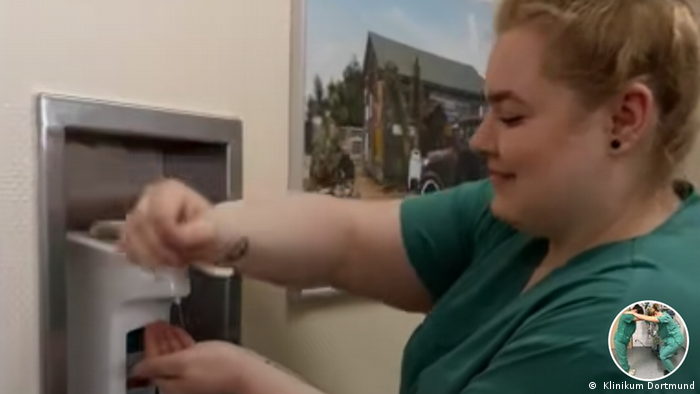 Squeezing disinfectants to the sound of "Pump up the Jam" was the hospitals first major success on TikTok. The platform has been a communication staple for the clinic since.

"We don't visit fairs, don't distribute flyers, applicants tell us they find us through social channels, without exception," he says. Social Media has become the clinic's sole recruiting tool. And it's not just TikTok. Instagram, Twitter, Facebook, "WhatsApp Academy" groups for school kids and students are just as much part of their employer branding as a Blood Drive app and their own job finding app.

The fight for skilled labor

Hospital staff is hard to come by in Germany, with a shortage of skilled labor on the one hand and digitization efforts on the other competing for people. Earlier this year consulting firm Roland Berger estimated that about 20,000 positions would remain unfilled in German hospitals in 2019. And clinics have entered a bidding war. 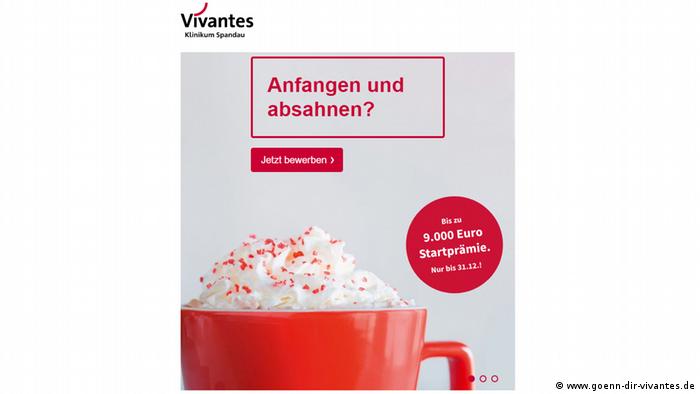 Pretty please with sugar on top: Germany's largest municipal clinic operator pays new employees up to 9000 Euros if they start a job there before 2019 is over.

Germany's largest municipal hospital operator Vivantes in the Berlin area has put a bounty on new employees. Health workers receive up to €9,000 ($9,920) if they join Vivantes and start a job at its Spandau clinic in Berlin by the end of the year.

"We have filled all our current 500 trainee positions and unlike others, we haven't had to close down wards because of labor shortages yet," Marc Raschke humblebrags, as he rejects the idea of directly paying people to join them.

TikToks for the company spirit

Instead, he believes in strengthening the team spirit to get people interested. "The videos are most important as an internal tool. Every production is a happening and it's something our staff will watch at night after coming home."

The social strategy was born when Klinikum Dortmund — one of the largest communal clinics in Germany — itself fell critically ill. Not only had the house finances needed to be put back in order, it was also necessary to regain the trust of people who work there.

Now, the clinic has waiting lists for new productions, and receives flocks of comments from people, who say they would love to work for such a progressive clinic. Despite its digital openness though, private performances at the hospital are not encouraged, for fear of mishaps that could have legal consequences.

What about data security? 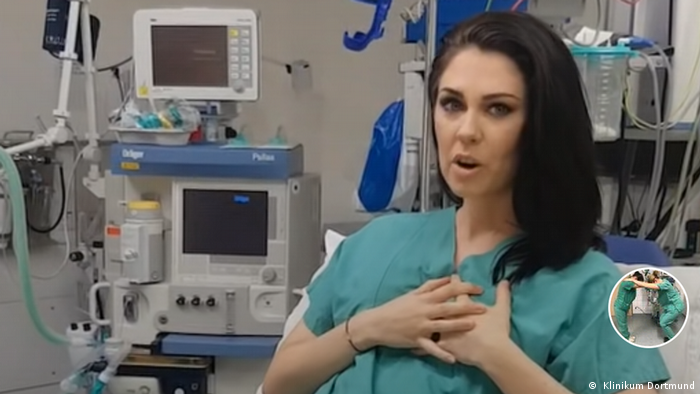 Key audience for the clinic's TikToks are health workers. Despite data security concerns over TikTok, the clinic is not worried. It says TikTok creators have no access to patient data.

TikTok's Chinese owner, ByteDance, has come under increased pressure in the past few months over censorship and data privacy concerns, and is being closely watched by some western governments. ByteDance, however, is denying links to the government in Beijing. Now, according to Reuter's sources, The company is making efforts toseparate TikTok from the company's other activities as US regulators question TikTok's data security.

The hospital isn't worried about protecting its data, though. "It's always a give and take with these platforms, no matter what country they're from," Raschke says, "but even if they're listening to what we do, it's all on my phone and that doesn't get anywhere near patient data," he explains with regard to security measures guarding the holiest of holy in the hospital world.

Currently, Facebook owned Instagram is the platform of choice for the clinic, because it allows for more depth and context. But TikTok is gaining momentum as a recruiting tool, and Raschke has a piece of advice for those who hope to find similar success on the platform: "On TikTok, you've got to be even more quirky, weird, more superficial than on the other platforms. You've got to be ready to give your audience that."

That's a classic trope of Social Media success: You've got to be authentic!

A teenager made a video denouncing China's Muslim internment camps disguised as a make-up tutorial. She was suspended from accessing the site after her video went viral. (27.11.2019)

Dozens of short videos featuring Uighurs crying silently have surfaced on a popular Chinese video app. Activists say the videos may contain hidden messages and are a form of protest against China's "re-education" camps. (23.08.2019)