Is Michel Houellebecq's recent novel, "Submission," Islamophobic or not? At his first public appearance since the Charlie Hebdo attack, the author explains himself - with a huge portion of ambiguity. 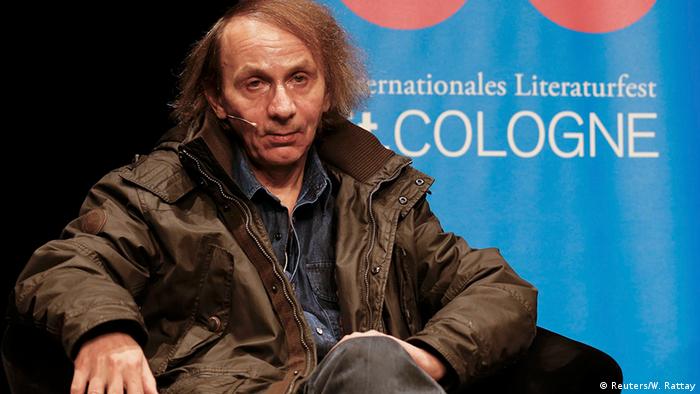 He's the most talked-about author around at the moment. After the Charlie Hebdo attack in Paris earlier this month, he headed out of town and spent some time in the countryside, he said, to recover from the shock and sadness. One of his close friends was murdered in the attack.

Two weeks later, Michel Houellebecq made his first public appearance on Monday (19.01.2015), as part of the literature festival lit.Cologne in the western German city on the Rhine River, which doesn't officially begin until March. The drama of the past weeks seems to have evaporated. Police have said that security measures had been heightened, but that wasn't particularly apparent. Nevertheless, security is usually strongest when it's invisible.

Monday's discussion with the writer was surprisingly relaxed. After weeks of accusations that his recent novel, "Submission," was Islamophobic, he made one thing clear from the start: He'd published a statement so he would not have to repeat himself to the press over and over again.

In it, he wrote, "Firstly, my book is not Islamophobic. And secondly, it's my right to write such a book."

He explained, however, that he almost wished that the book were Islamophobic. "That would have been easier for me. But actually the point is that one shouldn't let oneself be influenced from either side." 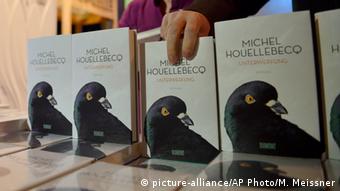 The German edition of Houellebecq's book was presented in Cologne

He emphasized how important it was to him to leave the statements in his book open to interpretation, which would make it difficult to prove any Islamophobic sentiment. On the other hand, the book also can't be seen as particularly Islamophile. But perhaps it's precisely this kind of ambivalence that characterizes enduring literature.

When it came to Charlie Hebdo, Houellebecq kept a certain distance and did not express solidarity with the satire magazine. For many French people, he said, freedom is extremely valuable, but it's also important not to pour oil on the fire and exaggerate things.

"Charlie Hebdo mixed oil and fire," said Houellebecq. "That's how it got people to think." The author also expressed criticism of the satirical publication, calling it "irresponsible."

But where can responsibility be found today? Houellebecq explained where it cannot be found: in politics, among politicians. The parties don't stand for anything anymore, he criticized, and have given up their political agendas.

Houellebecq's replies to the questions from host Nils Minkmar were often short and choppy. Either he wasn't particularly enthusiastic about an evening of political analysis, or he's one of those authors that tend to use artistic means to process the social upheavals of their time.

In "Submission," the narrator observes the social changes that result under Muslim President Mohammed Ben Abbes. The women suddenly start wearing only pants instead of stylish skirts and dresses, along with loosely cut blouses that hide any hint of a curve. The university in Paris gives up its identity as a secular institution. 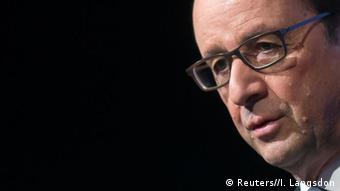 Houellebecq has accused Hollande of dragging his feet

Are portrayals like these Islamophobic? Houellebecaq gave a helpful tip. The newly elected president, he said, weighed other options, but chose to take an Islamistic approach.

Religion in the hands of demagogues - even reserved demagogues like Ben Abbes - can quickly get out of control. But does that have more to do with religion or with the way politicians interpret religion? Houellebecq leaves this question unanswered. But in the discussion in Cologne he did comment that religion - any religion - is closely bound up with its time and is in many ways powerless to those who try to use it for their own purposes, for example to mobilize their followers.

Indeed, pointing out the misuse of religion is often unhelpful because citizens of religious states are none-the-less subjected to contraints - sometimes with force, as in theocracies like Saudi Arabia, and sometimes more subtly, as in Michel Houellebecq's fictional picture of futuristic France. He said he doesn't hold it against his countrymen that many of them fear such developments in real life.

The author was, however, less understanding of the country's current president, Francois Hollande. If he were to be reelected in 2017, the political situation in the country would worsen dramatically, he opined. Houellebecq indirectly accused Hollande of dawdling - with the result that the far-right party Front National is continuously winning new supporters.

Where art stops and politics begin

Many French people grow nostalgic when they recall the presidency of Charles de Gaulle from 1959 to 1969, said Houellebecq, because that was a time when the country did not struggle in finding its own identity, as it does now. And Houellebecq is apparently not confident that President Hollande can resolve the country's current identity crisis.

The author insinuated more than he clearly stated, which made the readings from his novel more impactful. The book, it seems, is not Islamophobic. Like many other novels, it explores a fictional world and tests the boundaries of what is possible, but not yet reality.

Whether the reader welcomes these possibilities or wants to prevent them - that's where literature becomes political. The novel offers a gamut of possible scenarios, and it's up to society to respond to them.

Pornographic, vulgar, sexist, racist - all these words have been used to describe Houellebecq's work. Yet some critics, and the author himself, have argued that this criticism is fundamentally misplaced. (07.01.2015)