Hope to save critically endangered vaquita porpoise from extinction is dwindling | Environment | All topics from climate change to conservation | DW | 14.08.2019

Hope to save critically endangered vaquita porpoise from extinction is dwindling

The vaquita in the Gulf of California is the most endangered cetacean in the world. Most likely, no more than 10 animals are left. Its extinction is imminent — and some even say, it's for the best. 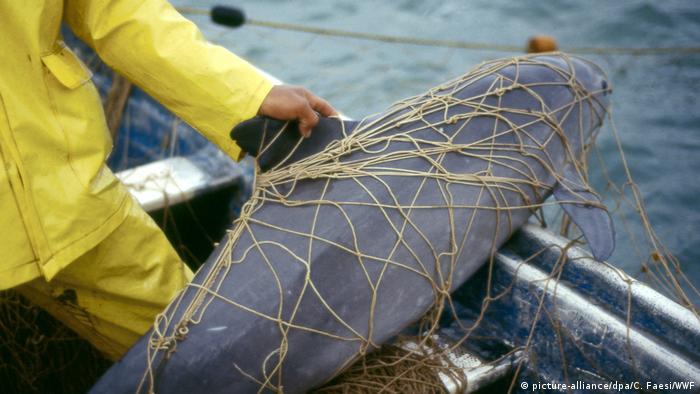 The Sea of Cortez, also called Gulf of California, between the Mexican mainland and the Baja California peninsula is one of the most biologically diverse seas on Earth.

According to the World Wildlife Fund (WWF), it's home to over 900 species of fish and hosts a wide range of endemic animals.

One is the vaquita (Phocoena sinus), the world's smallest cetacean. It's a grey porpoise up to 1.4 meters (55 inches) long, with dark rings around its eyes.

The vaquita is also the world's most endangered cetacean: Researchers estimate that somewhere between six and 22 are left, but very likely no more than 10.

Back in March, the Mexican Navy pulled yet another dead specimen out of the water.

Conservationists are losing hope. "I don't think we can save the vaquita," says Francisco Gomez Diaz, executive director of the Whale and Marine Science Museum in Baja California Sur.

He has been fighting for years to save the species from extinction in and around the Upper Gulf region where the last vaquitas live. 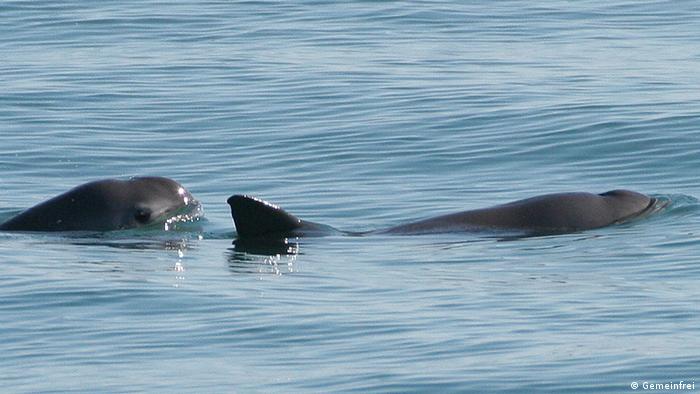 A rare sight: Two vaquitas surface in the Gulf of California. The elusive species is the smallest and most critically endangered cetacean in the world

But he and his crew have recently been forced to leave the area. It has become life-threatening to work in vaquita conservation, Gomez Diaz wrote in an email to DW.

"Organized crime has exceeded the authorities, and the federal government can't guarantee our security."

The Mexican upper Gulf region has turned from a peaceful rural area dominated by fishing villages into a conflict zone between illegal fishermen and the Mexican authorities, making saving the species more unlikely than ever.

Discovered in 1958, the evasive vaquita lives in shallow lagoons in the upper Gulf of California.

Although never actively hunted, the species has been listed as critically endangered by the International Union for Conservation of Nature (IUCN) since 1966.

Their fate is intertwined with that of the totoaba, a fish species whose swim bladder is used in traditional Chinese medicine to treat all kinds of diseases.

Although trade with wild-caught totoabas is illegal under the Convention on International Trade in Endangered Species (CITES), fishing continues.

Because the two species are roughly the same size, the cetaceans get entangled in the gillnets set out for totoabas.

In May 2015, the Mexican government banned all gillnetting in the area where the last vaquitas live, including for other fish species beside the totoaba, and set up a marine refuge for the vaquita. 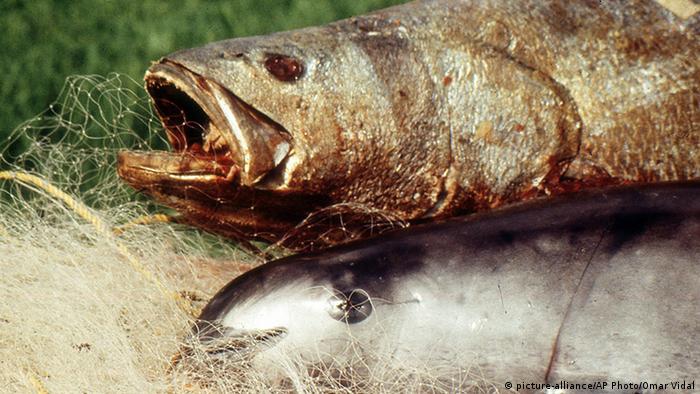 Fishermen impacted by the rescue plan were compensated by the government for their financial losses.

But that changed when the new government came to power in December.

Since then, financial support for fishermen has been slow in coming. And that has led to many of them taking matters into their own hands.

"Right now, both legal and illegal fishermen are working in the upper Gulf, inside and outside of the no-fishing zone," says Jorge Urban Ramirez, marine biologist at the Autonomous University of Baja California Sur in La Paz. "There are hundreds of nets around."

Since 2015, the porpoise population has been shrinking by roughly half every year. 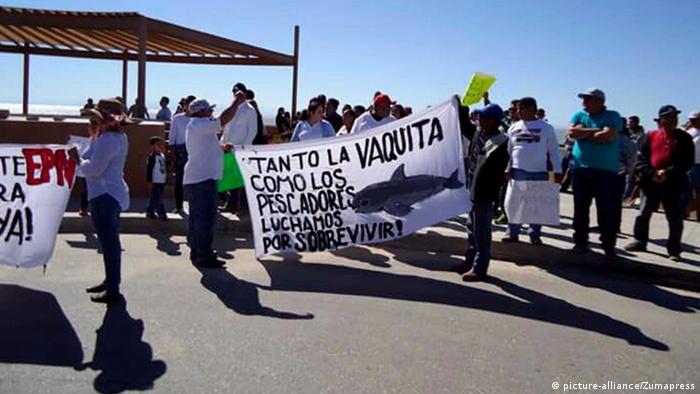 A marine reserve is not enough

Far from saving the species, the ban has driven many fishermen into the illegal, profitable trade with totoabas.

"Fishermen are sitting unemployed at home, drinking — and at the same time watching illegal totoaba fishermen making big money," says a Mexican expert working in the fish industry, who asked to remain anonymous.

He points out that, even at times when money from the government was still flowing, the ban devastated the region and its communities.

"The situation is worse than ever, there are illegal fishermen everywhere," says Lorenzo Rojas-Bracho of the Comision Nacional de Áreas Naturales Protegidas in Ensenada, one of the front-runners in vaquita conservation. "There is no governance any more in the upper Gulf, it is just like the Wild West. Organized crime from China and Mexico has taken over all the fisheries." 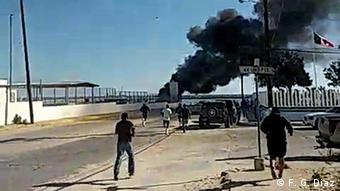 A still from camera footage shows a group of angry fishermen descending on San Felipe, where they demanded justice for the shooting of another fisherman

At the end of March, the situation got out of control. The Mexican marines caught illegal fisherman in the act of fishing totoabas, and a gunfight took place.

A fisherman named Enrique Garcia was shot; he had defected from the government to the totoaba fishermen. Two more fishermen suspected of poaching were injured in the shootout.

This led to an uprising. Dozens of angry fishermen swarmed the town of San Felipe, setting fire to government buildings, boats and vehicles, demanding justice for the shooting.

When Mexico's new president, Andres Manuel Lopez Obrador, was inaugurated in December, conservationists hoped the left-wing government would finally take action to implement the fishing ban in the vaquita refuge.

A few months ago, the government published its program called the Initiative for Sustainability in the Northern Gulf of California.

The document promises, among other things, to combat totoaba fishing and trafficking and to support the local communities with sustainable and responsible fishing practices.

According to Urban Ramirez, these are nothing more than declarations of intent.

"[The government] doesn't show how they expect to do it or when  some sort of timing," he says. "To me, it seems that they chose to do nothing with regard to the vaquita, and to wait for its extinction."

But Rojas-Bracho remains hopeful: From a purely scientific point of view the species can still be saved, he says.

"All the [dead] animals we have recovered from the gill nets were healthy and had a full stomach. So they were eating until they got entangled and drowned."

Although so few animals are left, the genetic material is still in good condition

"Everything indicates that the species will come back if you stop killing them."

(But) strong voices in Mexico are beginning to call for the end of the species for the benefit of the people in the Upper Gulf region.

"The vaquita is gone," the informant says, "and it is for the best."