People in Hong Kong will hold an annual vigil in memory of the bloody crackdown by Chinese troops from home this year amid coronavirus restrictions. Critics fear China is trying to curtail the city-state’s independence. 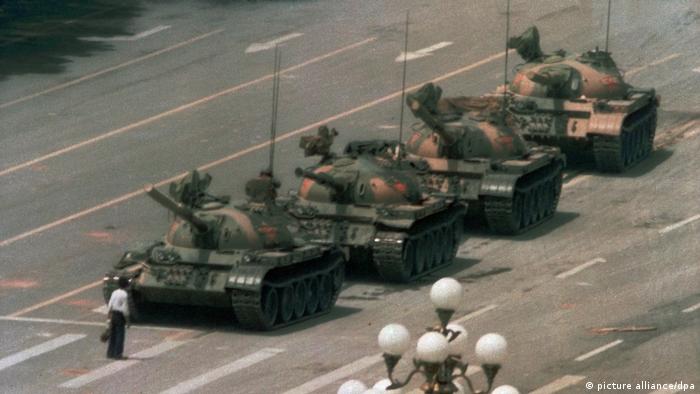 People in Hong Kong on Thursday made preparations to hold an annual candlelight vigil commemorating the 1989 crackdown by the Chinese military in Tiananmen Square from home, a workaround in face of a ban on the usual public gathering amid the coronavirus outbreak.

The police presence around Beijing's Tiananmen Square, a popular tourist attraction in the center of the city, appeared to have been higher than normal on Thursday. Barricades had also been erected around the Hong Kong park where the vigil is normally held.

For three decades, people have gathered in the Hong Kong's Victoria Park to mark the June 4 anniversary. The event usually draws tens of thousands of people.

But police have said the event poses a public health risk. Hong Kong recently reported its first locally transmitted cases of coronavirus in weeks. Gatherings of more than eight people are currently banned due to the outbreak.

Candles burn throughout the city

Organizers instead called on residents to light candles across the city at 8:00 P.M. local time (12:00 GMT) and to then observe a minute of silence.

People were also encouraged to use the hashtag #6431truth, in reference to the 31st anniversary and the date.

Despite the ban, some said they were still planning to gather in Victoria Park. Volunteers handed out white candles to people during their morning commute.

This year’s anniversary comes amid tensions in the semi-autonomous city after China made moves last month to impose national security legislation that critics fear will curtail the policy of "one country-two systems" that allows Hong Kong to self-govern.

The city’s legislative council also voted on Thursday on a controversial bill that would make it a crime to disrespect China’s national anthem.

EU calls for right to gather

The Tiananmen Square crackdown is not officially recognized in mainland China, where the topic is considered taboo and discussion around it is heavily censored.

On Wednesday, the EU called on China to allow people in Hong Kong and Macau, another semi-autonomous city, to observe the crackdown, calling it "a signal that key freedoms continue to be protected."

China has never provided a complete death toll for the 1989 crackdown on the student-led demonstration. Officials have said it was around 300, mostly soldiers. But rights groups and people present have said fatalities could have been in the thousands.

Carrie Lam's comments referred to the contrast between Western support for the pro-democracy protests in Hong Kong last year, and the response to recent anti-police brutality demonstrations in the US. (02.06.2020)