Another Hong Kong pro-democracy group has succumbed to pressure from Beijing, deciding to end after 32 years. The group had kept an annual vigil for those who died in the 1989 violent crackdown in Tiananmen Square. 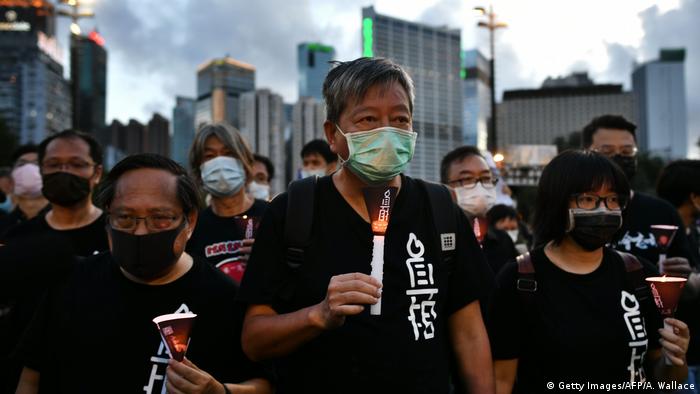 The pro-democracy group Hong Kong Alliance has decided to disband as pressure from Beijing continues, the group said on Saturday.

The activist collective, dubbed the Hong Kong Alliance in Support of Patriotic Democratic Movements in China, is the latest to buckle under the strain of a crackdown by Chinese authorities.

Factions aligned with Beijing have ramped up pressure after pushing through a sweeping national security law in the once largely autonomous enclave.

The majority of the members of the pro-democracy group voted for disbandment. Several of its leaders are already in jail for having taken part in the city's dissenting democracy movement.

"This is a very painful dissolution," said Tsang Kin-shing, a member of the alliance, speaking with news agency AFP. "The government uses all kinds of laws to force civil society groups to disband."

Targeted with charges of subversion

Under the Hong Kong national security law, anything deemed to be subversive by Chinese authorities can be punished with up to life in jail.

Albert Ho and Lee Cheuk-yan, two of the alliance's leaders, are already in jail under similar charges following the large-scale anti-government protests in 2019. They signed a document calling for the group to disband amid "the current social environment."

"I still hope to show Hong Kong Alliance's beliefs to the world and continue this movement that has already lasted for 32 years," wrote the group's jailed vice chairwoman, Chow Hang Tung, on her Facebook page.

Covering up the 1989 crackdown

The group was founded in May 1989 to support the pro-democracy student movement in Beijing. A month later, the army moved in and crushed the protests in the city's central Tiananmen Square. An official death toll stands at 300, but witnesses say thousands may have died.

The government subsequently scrubbed all memory of the event from the official record, but the Hong Kong-based group kept it alive by holding annual candlelight vigils on June 4. They would also use the events to call on China's leaders to "end one-party rule" and to "build a democratic China."

National security officials informed the group earlier in the year that they were investigating it under the new law. They requested documents and lists of its membership, but the alliance refused to comply, arguing that it was illegal.

Police then brought charges of subversion against the group's leaders, leading to a heavier clampdown.