Many Hong Kongers are watching the scale of China's crackdown in Xinjiang with fear. A protest in support of the Uighurs was violently put down by riot police. 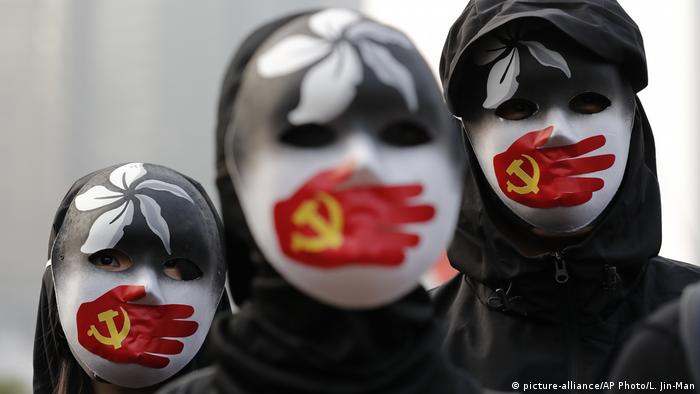 Around 1,000 people gathered peacefully near Hong Kong's Harbourfront, waving Uighur flags and posters in the latest in nearly seven months of protests against China in the semi-autonomous city.

Read more: China's Uighurs — what you need to know

"We shall not forget those who share a common goal with us, our struggle for freedom and democracy and the rage against the Chinese Communist Party," one speaker shouted through the loudspeaker to the crowd.

United Nations experts and human rights organizations have documented that China has imprisoned at least 1 million Uighurs and members of other largely Muslim minority groups in internment camps in the northwestern region of Xinjiang.

Read more: 'This is not a concentration camp': Analyst Victor Gao on China's Uighur prisons

China claims the prison camps are "vocational training centers" necessary to combat terrorism in the restive province. Beijing has denied mistreating Uighurs and acted in defiance of a chorus of international criticism over the harsh crackdown.

China runs Hong Kong under a "one country, two systems" model that grants the financial capital expanded freedoms not enjoyed on the mainland. Many Hong Kongers view China as encroaching on these freedoms and fear mainland policies will come to the city.

What started as a movement against Chinese meddling has morphed into broader calls for greater democracy and police accountability following months of often violent protests.

The huge scale of the surveillance and prison system in Xinjiang has been closely watched in Hong Kong, with many fearful that similar measures could befall the city.

"The Chinese government are control freaks; they can't stand any opinions they disagree with," Katherine, a protester in her late 20s and a civil servant, told AFP before police moved in.

"In Xinjiang they are doing what they are doing because they have the power to do so. When they take over Hong Kong, they will do the same," she added.

In 2047, 50 years after Britain handed the city back to China, the deal granting Hong Kong special rights ends.

Ilham Tohti is serving a life sentence after Beijing accused him of trying to promote separatism. Thousands of Uighur Muslims are thought to be in concentration camps in China's Xinjiang province. (18.12.2019)