Hong Kong authorities have sought to tarnish the image of protestors after some ransacked parliament. The pro-democracy camp says the violence amid larger peaceful protests reflects desperation. 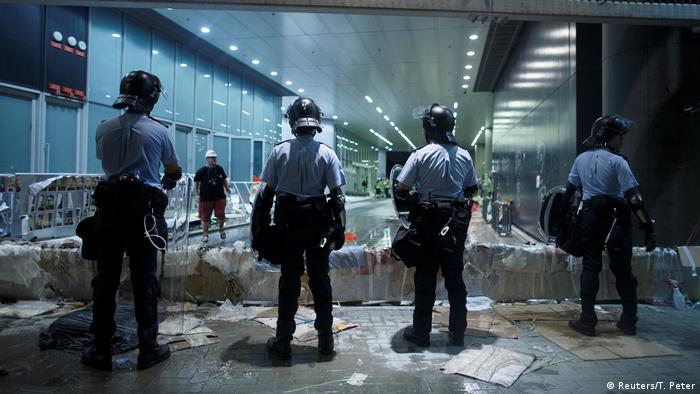 Police were able to regain control of the legislative council by firing tear gas after hundreds of protesters broke in on Monday night. Masked protesters wearing yellow hard hats were filmed smashing through glass doors and storming the legislative assembly chamber, defacing portraits of leaders, hoisting a British colonial-era flag in the main chamber and spraying the city crest with black paint.

Footage showed pro-democracy slogans spray-painted on the walls, while offices were destroyed, with smashed computer monitors and tables flipped over. 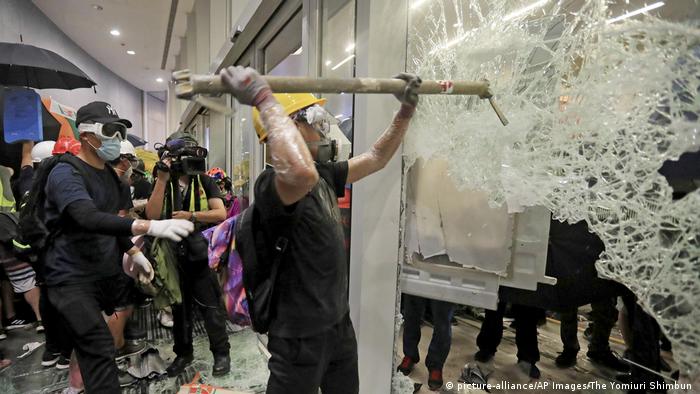 Hong Kong protesters were filmed breaking into the legislature

China's cabinet office for Hong Kong affairs issued a statement on Tuesday condemning the ransacking of the legislature.

"These serious illegal actions trample on the rule of law in Hong Kong, undermine Hong Kong's social order and harm the fundamental interests of Hong Kong," the Hong Kong and Macao Affairs Office of the State Council stated. "It is a blatant challenge to the 'one country, two systems' bottom line. We express our vehement condemnation against this."

China's central government "supports the relevant agencies of the Hong Kong Special Administrative Region to investigate the criminal responsibility of violent offenders in accordance with the law, to restore normal social order as soon as possible, to protect the personal and property safety of the citizens, and to safeguard Hong Kong's prosperity and stability," the statement added. 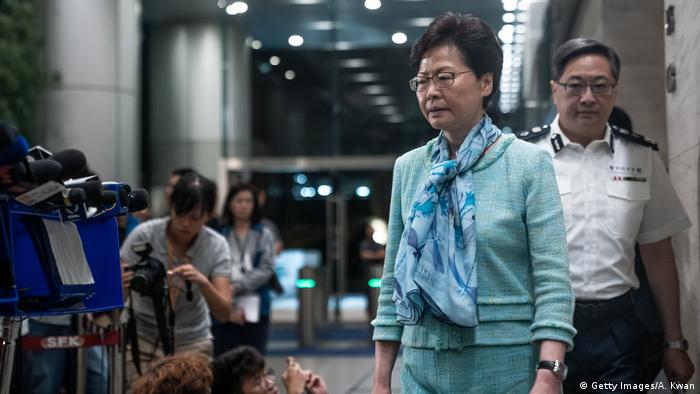 Carrie Lam at the press conference

Speaking Tuesday at Hong Kong police headquarters, Lam drew a distinction between the protesters. She said that two entirely different protests happened Monday — one an orderly march, and the other an out-of-control protest marked by vandalism and violence, the latter being "something we should seriously condemn."

Protests and marches ordinarily take place on the July 1 anniversary of the handover of Hong Kong from British to Chinese rule.

However, this year tensions ran high after weeks of demonstrations demanding the chief executive scrap an extradition bill that could allow Hong Kongers and foreign nationals to be sent to mainland China for trial.

Debate on the extradition bill was suspended indefinitely on June 15, after hundreds of thousands of protesters took to Hong Kong's streets. Despite the suspension, many of those in the protest movement are concerned it could be revived at a later date.

Lam said her government has responded to protesters' demands. "It is not true to say that the government has not responded," Lam said Tuesday morning. "By suspending the bill at this point in time with no timetable and no plan to resume debate in the legislative council, the bill will expire, or, the bill will die in July 2020."

"That is a very positive response to the demands that we have heard."

The pro-democracy movement in Hong Kong is concerned about the overall erosion of civil liberties in the city enshrined under the "one country, two systems" framework with China. They also demand larger democratic reforms, including in the election to the legislative council.

Pro-democracy activist Joshua Wong, who did not take part in the storming of the legislative council, said that as long as the government continues to ignore the people’s voice, "the momentum of this movement will continue."

"I believe the government can always create excuses even if we do nothing, and whether our action is effective or not, it still doesn’t affect the government’s attitude," he told DW. "I understand the international community might have concerns or hesitation about the behaviors displayed by young Hong Kong protesters, but I hope they understand why the young people in Hong Kong are willing to risk their lives."

Claudia Mo, the convener of the pro-democrat camp in Hong Kong's legislative council, said that young people may have become unnecessarily violent but that everyone should understand why.

"They are trying to raise problems, but the government simply tries to ignore the problems raised," she said. "The youngsters’ hostility inside the legislative council are aimed at the twisted election system. However, we of course don’t endorse vandalism, but we need to understand the reason behind."