A protest at the arrivals terminal of Hong Kong's airport prompted authorities to cancel all flights for the remainder of Monday. Protesters rallied against police brutality after another weekend of demonstrations. 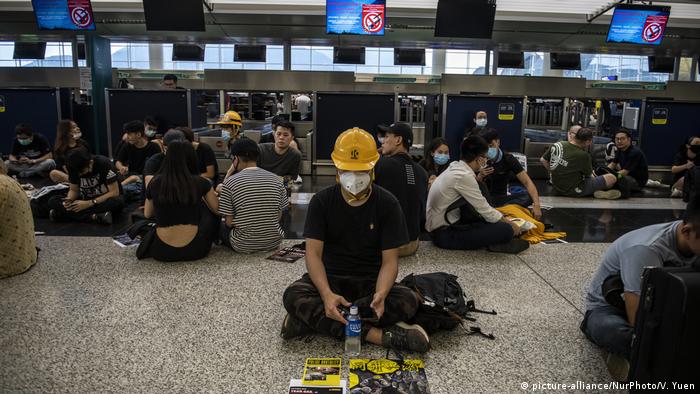 Hong Kong's airport suspended check-in for all flights on Monday due to a massive protest that began earlier in the day and disrupted operations in its arrivals terminal.

"Other than the departure flights that have completed the check-in process and the arrival flights that are already heading to Hong Kong, all other flights have been cancelled for the rest of today," the airport authority said in a statement. It later said it was working with airlines to resume flights from 6 a.m. on Tuesday (22:00 UTC Monday).

The arrivals hall swelled with demonstrators until there was standing room only. Thousands flocked to the airport to protest police brutality they said was committed during anti-government protests over the weekend.

Demonstrators chanted that police should "return the eye" of a protester who was seriously injured by police.

Many carried images of the weekend's protesters clashing with police or wore symbolic patches over their eye.

The airport gathering marks the fourth consecutive day of demonstrations that have taken place in what is a major transportation hub in Asia and one of the world's busiest airports.

China's Hong Kong and Macao Affairs Office issued a statement regarding the situation in Hong Kong, commenting that it was "beginning to show the sprouts of terrorism" and constituted an "existential threat" to the population there.

"One must take resolute action toward this violent criminality, showing no leniency or mercy," the statement read.

Hong Kong airline Cathay Pacific warned its staff on Monday that supporting "illegal protests" could result in being fired from the company.

Cathay's announcement follows new rules imposed by Beijing banning airline staff members who have been involved in the Hong Kong protests from flying to or over the mainland.

The airline was forced to cancel over 150 flights last week as a result of a strike linked to the unrest, and bookings have dropped since the protest movement began ten weeks ago.

"Cathay Pacific Group has a zero-tolerance approach to illegal activities," CEO Rupert Hogg said in a message to the company's employees.

"Specifically, in the current context, there will be disciplinary consequences for employees who support or participate in illegal protests," he added.

"These consequences could be serious and may include termination of employment," Hogg stressed.

Hong Kong has experienced more than two months of mass protests in rejection of China’s growing influence and in favor of democratic reforms.

Demonstrators have also demanded the resignation of Chief Executive Carrie Lam and an independent inquiry into police conduct.

A former British colony, Hong Kong was returned to China in 1997 under the "one country, two systems" principle.

Pro-democracy protesters held a sit-in in the arrivals hall of Hong Kong's airport. City leaders have said they will not concede to protesters' demands. (09.08.2019)

The US should stop sending the wrong signals to "violent" protesters in Hong Kong, China has warned. Washington has raised a travel warning as further demonstrations are planned. (08.08.2019)