Jimmy Lai and several other activists have gone on trial for their role in last year's unauthorized event. Most of the defendants have already pleaded guilty. 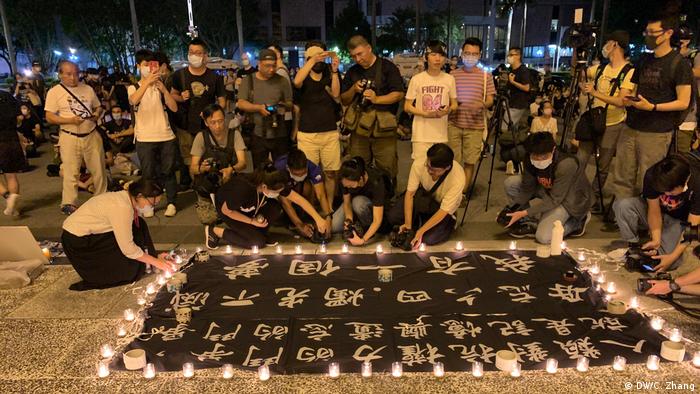 Three of the accused pleaded not guilty to their charges, including Jimmy Lai, the founder of the now-defunct pro-democracy paper Apple Daily. The others pleaded guilty.

The yearly remembrance for those who were killed during the bloody response to the 1989 protests in Beijing's Tiananmen Square has been banned for the last two years.

The government cited health risks caused by the coronavirus pandemic, but critics say it is part of a crackdown against dissent in the semi-autonomous territory.

'Mourning is not a crime'

Lai has been charged with inciting others to take part in the banned vigil. Lawyer Chow Hang-tung and former reporter Gwyneth Ho also pleaded not guilty to the charges leveled against them.

"I understand every word you said but I do not understand why it constituted a crime," Chow — who helped run the group that organized the vigils — told the court. "Mourning is not a crime. I plead not guilty," he added.

The trio will be the only defendants to stand a full trial. The remaining individuals will enter mitigation pleas next week, ahead of sentencing.

Furthermore, Lai is facing 20 months' imprisonment for a case connected to the 2019 protests in the city.

Hong Kong had been one of only two places in China where the Tiananmen vigil had been permitted. The annual ceremony had taken place without fail for three decades.

Tens of thousands of people used to take part and attendees would carry slogans calling for democracy and ending the one-party state.

Given the role the vigil played as a symbol of political freedom, pro-democracy advocates see the vigil bans as an attempt to remold Hong Kong in Beijing's authoritarian image.

In total, 26 activists were arrested for organizing the vigil last year, of which 16 have been sentenced to between four and 10 months jail time, after pleading guilty.