Honduras' electoral tribunal has given incumbent President Juan Orlando Hernandez the lead in a partial recount. The opposition has claimed the vote was "rigged" and wants the results annulled. 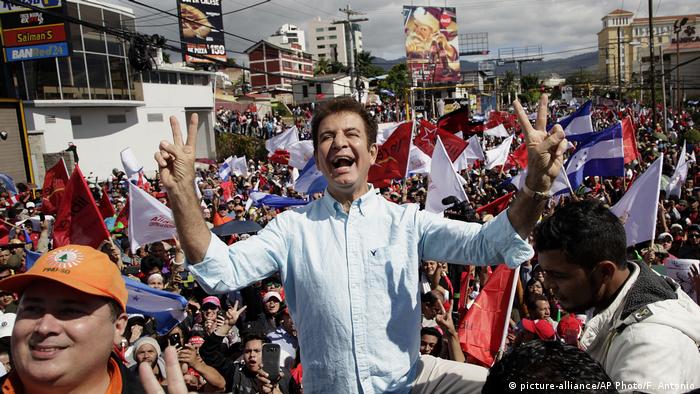 In total, there are 18,128 ballot boxes. According the latest results announced by the Supreme Electoral Tribunal taking into account all ballot boxes, Hernandez is ahead by more than 52,000 votes, or 1.6 percent.

Honduras has been plunged into political uncertainty since the November 26 election, with repeated delays and concerns over inconsistencies plaguing the vote. 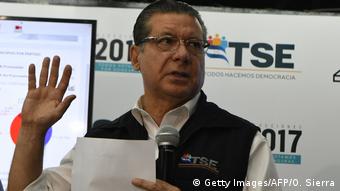 The left-leaning Nasralla had a 5-percent lead a day after the election with more than half the votes counted, but then fell behind when new numbers were announced 36 hour later.

Both Hernandez and Nasralla have claimed victory.

The electoral deadlock has sparked concerns of instability and a drawn-out political crisis in the poor Central American country wracked by gang violence. The electoral tribunal has not declared an official winner, but must do so by December 26.

Read more: Opinion — Honduras crisis was long in the making

The opposition first demanded a recount of all ballot boxes after it claimed fraud, but on Friday formally filed for the election to be completely annulled. It has boycotted sending representatives to the electoral commission to observe the partial recount.

The Organization of American States expressed concerns earlier this week over transparency and irregularities around the electoral process, prompting the electoral commission to accept a request to recount 4,753 ballot boxes.

The crisis has triggered violent protests, prompting the government to declare a state of emergency and dusk-to-dawn curfew.

Amnesty International said the government is using "dangerous and illegal tactics to silence any dissenting voices" in the wake of the contested election. At least 14 people have died, many from bullet wounds, the rights group said.

"Honduras seems to be on a very dangerous free fall where ordinary people are the victims of reckless and selfish political games," said Erika Guevara-Rosas, Americas Director at Amnesty International.

Thousands of opposition supporters flooded the streets across the country on Sunday, including the two largest cities Tegucigalpa and San Pedro Sula. 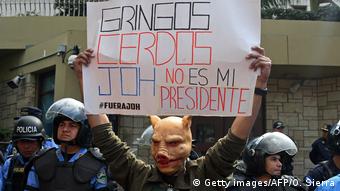 Opposition supporters came out in support of Nasralla on Sunday

In Tegucigalpa, Nasralla told crowds the government and electoral commission were carrying out "blatant robbery."

He also accused the United States of supporting Hernandez, a conservative who was controversially allowed by the Supreme Court to run for a second term despite a one-term limit.

The opposition says the top court, which it claims is stacked with Hernandez loyalists, did not have authority to make the decision.

A local bar association has also filed a request to annul the election on the grounds that Honduras' constitution does not allow Hernandez to be re-elected.

Leading opposition candidate Salvador Nasralla has described "scandalous fraud" discovered in the wake of the elections. Despite a constitutional ban, Honduras' president ran for a second term in office. (09.12.2017)

Honduras: 5 things to know about the divisive elections

As Hondurans head to the polls in key elections, fears of political instability have risen across the country. From a history of military coups to alarming violence, DW examines the country's toughest issues. (26.11.2017)