Homosexual relationships are a crime in most African countries. In Kenya, sexual acts between two men can lead to 14 years in prison. The Supreme Court is now hearing a case seeking to overturn this. 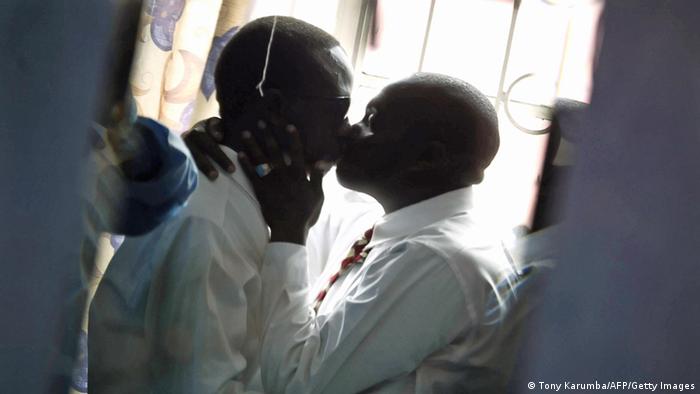 The courtroom in the center of Nairobi is packed. The wooden benches reserved for the audience are fully occupied, forcing many others to stand, leaning against the wood paneled walls. This was the scene on February 22, 2018 — the first day of a legal case that could go down in history.

Three judges of the Kenyan Supreme Court listen to the arguments from both sides. The LGBT (lesbian, gay, bi, trans) community is well represented. They are fighting to abolish all laws which criminalize homosexuality. But many opponents have shown up as well, objecting to the plan to legalize same-sex relations.

Change in a conservative society

Brian works for the Gay and Lesbian Coalition of Kenya (GALCK), one of the organizations that initiated the court case. The 27-year-old strongly hopes the ruling will be in their favor. Brian knows what it means to be harassed and attacked because of his sexual orientation. "I received a lot of verbal [abuse] in the last year," says the activist, recalling a situation where he was asked whether if he was a man or a woman.

Many members of the LGBT community are regularly subjected to discrimination and even physical attacks just because they are perceived as being different. "It is largely because I express my gender differently and that obviously strikes people by surprise," says Brian. The former student of journalism notes that these attacks often occur in low income areas or parts of the country that are highly conservative. 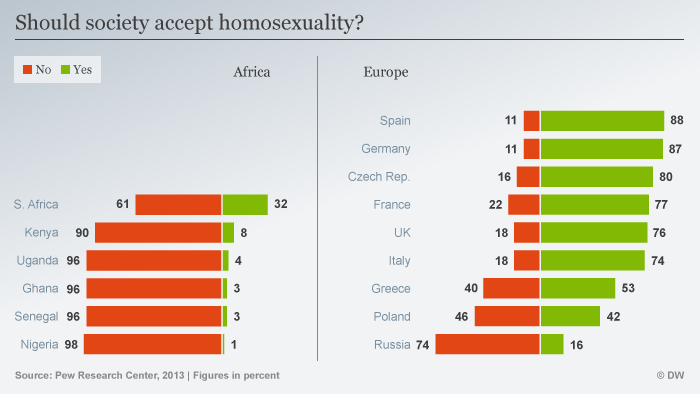 Beaten up for being gay

However, the rising number of LGBT organizations and major court cases show that some progress has been made. Brian thinks the country has become a bit more liberal since the time when he came out around ten years ago: "I was in high school and had a relationship with another schoolmate," Brian told DW.. The couple kept their relationship a secret until other classmates found out about them. "They created a huge scandal so that my partner and I were suspended from school."

At home Brian had to admit to his mother that he was gay. "Going back home was a crazy experience because my mother was really conservative and religious." She disowned Brian and threw him out of the house. He stayed at his grandmother's place until the police came to arrest him a few days later: "I was taken to the police station where they beat me up. I stayed in a cell for about one week before I was released again."

Back then, Brian was not aware that the police officers had violated his personal rights because homosexuality itself is not illegal in Kenya. "The legal sphere is essentially not the criminalization of homosexuality but same-sex activities with an emphasis on males," human rights lawyer and activist Waruguru Gaitho explains. There is no specific law that criminalizes lesbian relationships.

Kenya's anti-homosexuality laws are based on sections 162 A and C and 165 of the penal code, which dates back to the colonial era. "The penal code is the law defining crime and punishment and was directly inherited from the colonial British law," says Gaitho. These two sections are up for debate in the current court case.

The current punishment is five to 14 years in prison — assuming that a homosexual act can be proven. However, Kenya's 2010 constitution places a strong emphasis on human rights and protection against discrimination and has already been used as a basis to protect the rights of minorities.

In some African countries the punishment for homosexuality is death

Brian explains some of the opposition's main arguments against homosexuality: "Their main position was that homosexuality is un-African. It is something that came with the Western colonists and is not natural to African culture."

The lawyers representing the LGBT organizations are seeking to disprove these arguments: "We had an expert witness who talked about cultures in Kenya and within Africa where homosexuality and bisexuality existed in peace and harmony without affecting anyone else," said Brian.

The opposition fears the case may be the beginning of a slippery slope from their perspective: "They said that the case was a plot to implement gay marriages in Kenya like in other countries," says Brian. So far, South Africa has been the only African country to legalize same-sex marriages. In contrast, most European countries have implemented some sort of official gay and lesbian relationship.

Most European states recognize some form of same-sex partnership

A brighter future ahead?

After three days of hearings, Brian and other LGBT activists are now waiting for the final decision. The petitioners are expected in court again on April 26, but the official ruling will not be announced until a month later.

Brian is optimistic about the outcome but Gaitho is more cautious: " It's very difficult for me to predict because once the arguments are exchanged, you have no more control over a case."

If the LGBT community does win, the law will be on their side in future cases of discrimination. "I'd like to see a Kenya that is brave, that has brave LGBT people who are claiming their space and living their truths," says Brian. "It will be a generation of leaders that wants to bring peace and stability and creates a space free of stigma and discrimination."

Rights groups have hailed the ruling as a "tremendous step" for gay rights in the conservative country. Kenya has been listed by LGBTQ rights groups as a country that sponsors homophobia through its laws and policies. (22.03.2018)

A group of gay rights activists in Uganda have taken a government agency to court for refusing to register their organization. Homosexuality is illegal in the country, and violence against sexual minorities is rife. (18.05.2017)