The current system makes it almost impossible to escape the "rigid poverty" endemic in Germany, a new report warns. It also called on the German government to build over 150,000 new properties a year, to avert a crisis. 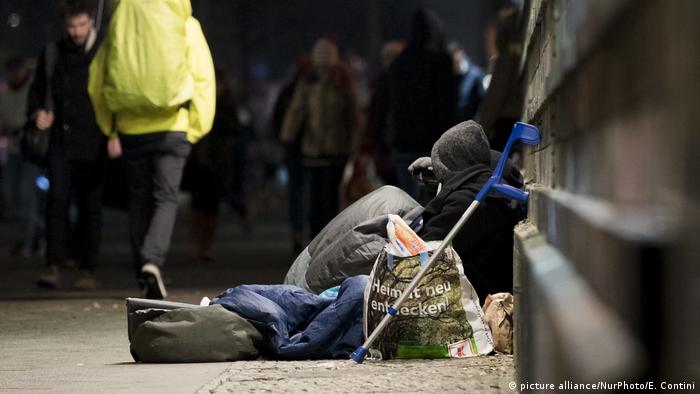 Around 650,000 people in Germany are without a permanent home, according to figures released by the Federal Association for Assistance to Homeless People (BAGW) on Tuesday.

BAGW's CEO Werena Rosenke warned in the report of a "rigid poverty," which people struggled to get out of.

Key data from the report

The figures are based on estimates from 2017 and revealed that:

The previous estimate was of around 860,000 homeless people. However, this year's report specified that the new, lower figure was not an indication of less people being homeless in Germany, more it was an improvement in their method instead. The number of homeless in Germany is more likely to have increased by 15 to 20%, the service said. Rosenke said there was "no reason to stop pushing for change." 22,000 children are among the homeless in Germany.

"Without homes for the homeless and without a well thought-through system of prevention in every community, we will not be able to tackle homelessness and the housing shortage," Rosenke added.

Not enough houses are being built, the BAGW argued, saying in the report that: "We need between 80,000 and 100,000 new council flats every year, and another 100,000 new affordable apartments." Germany is short of around two million houses, the report added.

Demonstrators marched through Berlin in April 2019 to protest skyrocketing rent increases — rents have doubled over the last decade in cities like Berlin. Protesters demanded the government take control of thousands of apartments from large property companies such as Deutsche Wohnen and Vonovia.

The debate on homelessness in Germany reached a fever pitch in the winter of 2018, when nine homeless people died due to the cold.