Home field advantage as Putin visits German school in Moscow | Europe| News and current affairs from around the continent | DW | 30.06.2016

Imagine going to school in the morning, and being greeted by the Russian president. That’s what happened to students at the German School in Moscow, who are working on a history project about World War II. 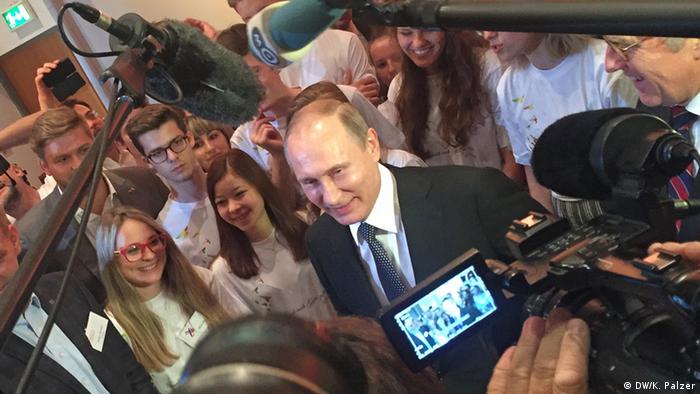 "Schönen guten Morgen, liebe Freunde!" Russian President Vladimir Putin had his German greeting down pat. And having delivered it with a big smile, he immediately won over the students at the German School in Moscow.

It was not the first time that Putin had been to the school. Before accepting the invitation to visit in his capacity as Russia's head of state, he was just another parent. Both of Putin's daughters attended the school in southwestern Moscow for four years. For Putin, it was important that they learn to speak German, just as he once did in Dresden during his time as an agent for the Soviet secret service, the KGB.

Effects of the war still felt

The students at the German School in Moscow have just started a history project about the German invasion of the Soviet Union in 1941. It happened 75 years ago; the students' great-grandparents lived through it. For many of these 17-year-olds, the invasion is a chapter in their history books, nothing more. But not for 16-year-old Mascha Karelji. She was born in Moscow, the daughter of a Russian mother and an Austrian father. The Great Patriotic War, as World War II is known here in Russia, is part of Mascha's family history. 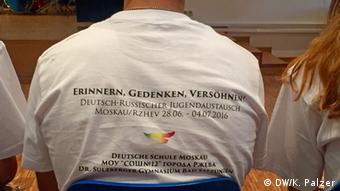 "This is very important. My grandparents suffered in this year, and that's something that should not be forgotten," says Mascha in perfect German. Her fellow student Stefan Schneider adds: "I do feel a sense of guilt, but most of all I feel sorry for the people, both the Russians and the Germans, because they all suffered under this reign of terror.

That's why, as part of the history project, teenagers from Russia and Germany are spending a week together talking, working, playing, and eating. Because it should not be taken for granted that 16-year-olds here say things like: "We are the ones who must uphold relations between Russia and Germany. Everything depends on us."

The children who attend the German School in Moscow are either Germans who live in Russia, or Russians for whom Germany, and especially the German language and culture, is important.

Looking back at a difficult time 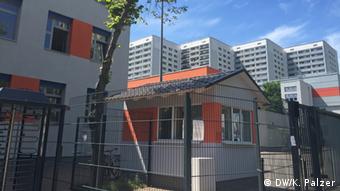 Relations between the two countries are currently anything but easy. Germany supported Western sanctions against Russia in response to Russia's actions in Eastern Ukraine and the annexation of Crimea. Chancellor Angela Merkel is regularly mentioned in the Russian media in this context. Many in Moscow associate her with rigorous anti-Russian policies.

Despite the difficult political situation, the Russian president accepted the invitation to visit the school and speak to the Russian and German students about their common future. He was careful to stress that Russia and Germany have always been strong economically when they have worked together. He also spoke of the humanist values anchored in the hearts and minds of young people.

An enjoyable appointment for Putin

The president stood among the students, smiling almost non-stop. He appeared to enjoy the appointment. He was not met with any critical questions. After 45 minutes, he was gone. The students were amazed at how close they were able to come to the Russian president. The Russian students were particularly impressed.

Many of the students commented that the visit shows how important German-Russian relations - and not just economic relations - are for Putin. Here in this small bit of Germany in Moscow, behind very high fences, that sounds very hopeful indeed.

Poland has incurred Moscow's wrath after deciding on a location to dump its Soviet-era war memorials. Moscow protested strongly when one such monument was removed in 2015, with plenty more of the same set to follow now. (29.06.2016)

US accuses Russia of harassing diplomats

An increasing number of US personnel in Moscow have reported incidents of intimidating, sometimes violent behavior by Russian agents. John Kerry took the matter to President Putin personally. (28.06.2016)

While the world has its eyes on a Brexit, the Russian Duma is voting on a set of anti-terror laws that will drastically limit civic freedoms. Above all, social media activities will be harshly penalized in the future. (23.06.2016)