European Catholics arrive in Aachen this week to see a 2,000-year-old dress reputedly worn by Mary when she gave birth to Jesus. Christian relics continue to draw crowds, but for most people seeing isn't believing. 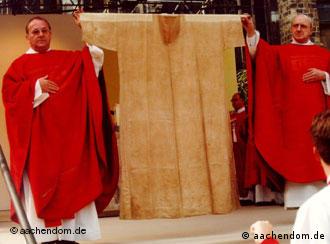 Virgin Mary's dress is a treasured relic. But is it real?

The bones and belongings of holy people remain a big tourist draw in Europe. For most modern day pilgrims, whether the ancient Christian relics are real or not is beside the point.

Aachen expects 100,000 pilgrims and tourists during its 2007 pilgrimage, which started Friday and goes until June 10.

Among the visitors will be plenty of skeptics. That's okay, Aachen's Roman Catholic Bishop Heinrich Mussinghoff said at the Friday service to open the shrine containing the relics. One doesn't need to do pilgrimages or venerate relics to be a good Catholic, he said.

Most modern day Catholics emphasize relics' importance as symbols rather than their belief in supernatural powers.

Mussinghoff likened relics to a family heirloom which is treasured for providing a link to the past. Relics "speak of the difference these people made, of what they accomplished for the future, of their thoughts, actions and beliefs which are still so valuable and precious today," he said. 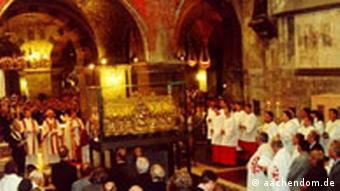 But Christian Weisner, a spokesman for We Are Church, a group advocating for reform of the Roman Catholic Church, said he sees relics as a form of superstition.

"I have some reluctance about praying to relics or expecting healing from relics," he said. "We have to be careful not to become superstitious."

Weisner does applaud some of the modern day activities that often go along with relics such as making pilgrimages, praying and meeting other believers, he said. All those are important parts of the catholic faith, Weisner said.

"Belief needs emotional things," he said. "At the same time we have to use our brain, we need reason."

A matter of faith 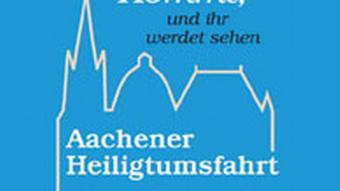 The popularity of relics surged during the Middle Ages and ended with the Protestant Reformation.

During the Middle Ages, relics were thought to provide a direct link to the saint. Going on pilgrimage provided a way to have sins forgiven and shorten the time in purgatory. For many pilgrims, coming face to face with relics was the most terrifying and awesome experience of their lives.

Pilgrims to Aachen faced some of the most important characters in Christianity: Jesus, his mother Mary and John the Baptist.

As the center of Charlemagne's empire, Aachen was Europe's most important pilgrimage destination during the Middle Ages after Rome and Santiago de Compostela in Spain. Charlemagne's role in acquiring the relics in 799 is "only a legend," said relic expert Christof Diedrichs, a researcher at the Humboldt University in Berlin.

Besides Mary's dress, Aachen has three other major relics: Jesus' swaddling clothes, a cloth used during John the Baptist's beheading, and the waistcloth Jesus wore during his crucifixion. Aachen has brought the relics out for a public viewing once every seven years since 1394.

What has been scientifically proven is that the textiles which make up the four Aachen relics has been shown to date back to the first or second century after Christ, Diedrichs said. 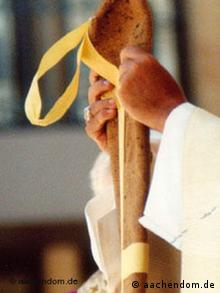 This package contains cloth believed to be Jesus' swaddling clothes

Even during the Middle Ages, pilgrims mixed holiness with tourism. Today, people travel to see relics out of piety, curiosity, skepticism, or an interest in history.

The supernatural has also regained popularity, Swatos said. Modern day pilgrims are willing to believe the bones of a saint really could be magical.

"It's all right once again to have feelings and to imagine the unimaginable," said Swatos, who is also the executive officer for the Association for the Sociology of Religion. "You can transcend the rationality of modernity. The old can also become new and true again." 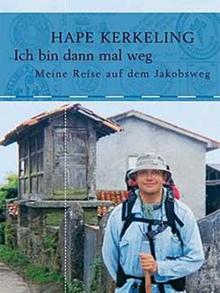 Famous Germans, such as entertainer Hape Kerkeling, have gone on pilgrimage

Religious pilgrimages and tourism have increasingly become intertwined. Going on pilgrimage has become fashionable not only for the devout but for hikers and mystics.

American actress Shirley MacLaine's interest in New Age spirituality led her to walk (and write a book about) the Way of St. James (Camino de Santiago) in Spain.

According to media reports, Kerkeling is digging out his hiking boots again this week. He'll walk with 3,550 school children to visit the relics in Aachen.

Aachen: History Meets High-Tech at the Cradle of Europe

Once the heart of Charlemagne's kingdom, Aachen is now a center of technology and learning. Located in western Germany near both the Dutch and Belgian borders, the city is considered a model for cross-border cooperation. (27.04.2007)

The election of a German pope has revived the once flagging fortunes of the Roman Catholic Church in Germany, bringing people back to the fold and inspiring the affection of younger worshippers, observers say. (02.04.2006)

Forget trekking to far-away lands -- most German pilgrims stay close to home. In the pilgrimage season, believers flock by the millions to sacred German sites, renewing their faith along the way. (01.05.2006)