Holocaust Remembrance Day: There must never be another Auschwitz | Germany | News and in-depth reporting from Berlin and beyond | DW | 26.01.2022

Holocaust Remembrance Day: There must never be another Auschwitz 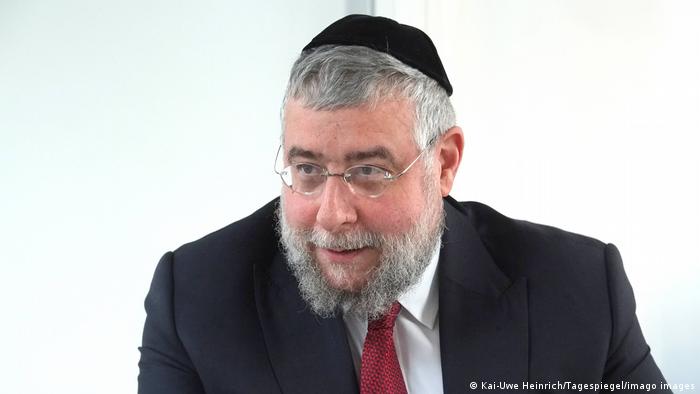 Pinchas Goldschmidt, one of the most respected rabbis of his generation, has been the chief rabbi of Moscow since 1993

The horror of Auschwitz is part of Rabbi Pinchas Goldschmidt's family history. In an interview with DW, the 58-year-old described the fate of his ancestors and gave his advice for the generations to come.

DW: Rabbi Goldschmidt, seven years ago we met at the commemoration of the liberation on January 27 at the Auschwitz-Birkenau concentration camp memorial. And you told me that more than 40 of your relatives were murdered there by the Germans. We stood there in the freezing cold, and then we were silent for a long time. Can an outsider even empathize with such a loss?

It's the problem of the Holocaust. It's the numbers. You know, people listen to my 'half-million children and 6 million human beings,' and it's a number which does not register with normal people. However, when you tell people, 'My great- grandfather was killed here, and I think the mother and the brothers, sisters of my grandfather,' — those victims are getting names; those victims are getting faces, and each one had its own life.... that ended abruptly through this killing machine in Auschwitz.

Your grandparents survived. How did they speak to you about what happened, about how they felt about surviving, or about how they miss their brothers and sisters, their family?

My grandmother got tuberculosis a few weeks before the "Anschluss" (when Germany invaded Austria in 1938 — Editor's note). Yes, and they lived in Vienna and they came to Switzerland, to the Swiss Alps, to the sanatorium. They stayed in Switzerland and that's what saved their lives. And so, my mother was really born in Switzerland.

My grandparents almost never spoke about the Holocaust. I think it was such a loss that my grandfather had a hard time talking about it at any moment in his life. He never opened up. The Hungarian Jews (Goldschmidt's family came from Hungary — Editor's note) were mostly killed at the beginning of the summer in 1944, [but] we don't know the exact day that they were killed. I remember always my grandfather getting very, very upset during the memorial prayers. It's at those times I remember seeing my grandfather crying or getting emotional about his parents and his brothers and sisters who were killed.

Do you recall your first visit to the Auschwitz camp?

Yes, my first visit to Auschwitz was in 1998 together with my wife, Dara, and Ronald Lauder (now president of the World Jewish Congress — Editor's note). That was around the time he started to support the Auschwitz Museum and he took me along. It was a very emotional visit. I remember seeing the mountains of children's shoes in the museum. I remember that moment.

And for you and your generation in Germany, what memories do you have of your relatives who were murdered? How do you commemorate them?

I can give you one example: My great-grandmother's name was Mariam Golda. And just two years ago my granddaughter was born in Philadelphia, in the United States. And she was named after her.

The number of remaining Auschwitz survivors is declining rapidly now ...

Yes, unfortunately, the last survivors are about to leave the world. And as in that moment, it's not going to be any more a part of our lives. It's going to be basically part of history. And, therefore, it is very important that the lessons of the Holocaust should stay with every one of us, and the children and the grandchildren of the victims and the grandchildren of the perpetrators. And that we all make sure that such a thing never happens again. And therefore, I think movies are good, but real-life visits are also an extremely important factor.

What will it mean when there are no longer any living survivors?

The great danger is that it's just going to turn into another statistic, another historic fact that is open for debate. Like World War I or the Napoleonic Wars or whatever.

But the Holocaust is much more than that because actually, Europe, as we know it today, is based on the lessons we learned from the crematoriums of Auschwitz: Never to repeat the mistakes of racism and colonialism in Europe today, but to protect its values. And in today's Europe, at this time of great political turbulence, it is very important that everyone, especially young people, should remember what can happen if our basic values are not upheld and protected.

So, to quote writer and Holocaust survivor Primo Levi: "If something happened once, it can happen again"?

Yes, unfortunately, history tends to repeat itself. And of course, we hope and we pray it will never happen again. But we have to educate our children, and we have to behave in such a way to make sure that doesn't happen again. We must remember it is the silence of the majority that makes it possible for a minority to destroy the world. 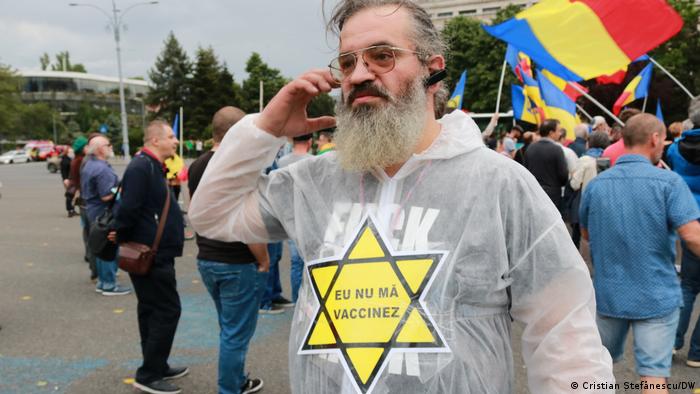 At this time of the COVID pandemic, especially in Germany and Austria, we see some opponents to the state's restrictions on individuals' lives draw parallels to the persecution of Jews by the Nazis. They are seen wearing the yellow star and making references to concentration camps and so on. How does that make you feel?

This trivializing of a great tragedy; it's not going to help humanity. I don't want to argue with anyone whether they have the right to refuse vaccination, but to use Holocaust imagery and symbols to make their point, I think it's just an ugly caricature.

How would you expect police, the judiciary and politicians to react?

They should act responsibly. Unfortunately, because of the influence of social media today, the political discourse has become very loud, very shrill, very extreme. We need to press reset and discuss issues of very great importance in a much more constructive way, showing mutual respect.

You started a dialogue with Muslim teachers some years ago, and you regularly meet with the leaders of Christian churches. Do we need a stronger coalition of religious people to send the strongest signal for respect for all these people who were killed in the Shoah?

Yes, we need a coalition of responsible people, religious leaders and leaders of civil society, and politicians who come and say that enough is enough. They need to say: "Let's converse with each other with respect and with dignity. Let's build a future together!"

Rabbi Pinchas Goldschmidt, born in Zurich in 1963, is one of the most respected rabbis of his generation. He has been the chief rabbi of Moscow since 1993. In July 2011, he was elected president of the Conference of European Rabbis (CER). Goldschmidt is also involved in interreligious dialogue and has met Pope Francis several times, most recently in October 2021.

Anti-Semitism and far-right extremism are rising, while minorities' religious freedoms are being limited, says Pinchas Goldschmidt, who heads the Conference of European Rabbis. He fears for Jews' very existence.

On the eve of the Conference of European Rabbis' Kristallnacht memorial, the president of the conference, Pinchas Goldschmidt, speaks to DW about memory, religious freedom and the rebirth of the German Jewish community.