Holocaust haunts Lithuania as names are erased from capital′s map | Europe | News and current affairs from around the continent | DW | 14.08.2019

Holocaust haunts Lithuania as names are erased from capital's map

The country's capital is the scene of a heated controversy over Lithuanian independence fighters who had links with Germany's Nazis. Jewish activists are pitted against nationalists — and things are turning nasty. 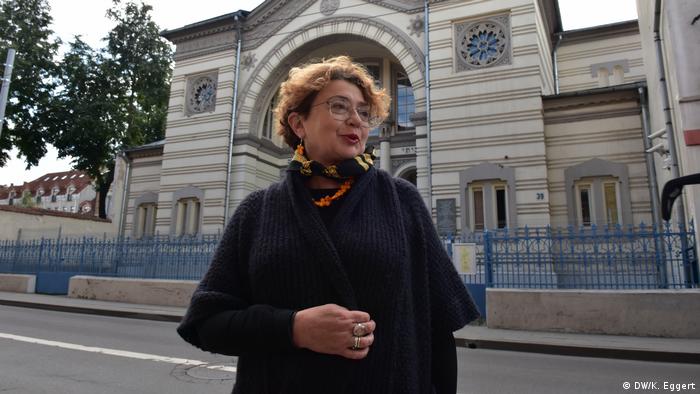 Faina Kukliansky, head of the Jewish Community of Vilnius, in front of the Lithuanian capital's main synagogue

Many Lithuanians consider Kazys Skirpa and Jonas Noreika heroes of the nation's independence struggle. Jewish organizations — in Lithuania and around the world — have long campaigned for them to be condemned as Holocaust enablers and denied official commemoration.

It was never going to be an easy decision: The mayor of Vilnius, Remigijus Simasius, knew a storm was coming when he signed a decree on July 24 changing the name of Kazys Skirpa Street and days later another, to remove a memorial plaque dedicated to Jonas Noreika from the library of the country's Academy of Sciences.

A small group of radical nationalists held a rally in central Vilnius to protest the mayor's decrees, railing against "traitors who spit at the memory of the nation's great sons." Vilnius' synagogue was temporarily closed. The president's office tabled a meeting to address, among other issues, renaming streets and memorial plaques, BNS news agency reported.

The most sensitive issue of Lithuania's past – the Holocaust – had ignited passions once again.

Kazys Skirpa was an officer and one of interwar Lithuania's top diplomats. When the USSR occupied the Baltic states in 1940, he was military attaché in Berlin. There he founded the ultra-nationalist Lithuanian Activist Front (LAF), which aimed to reestablish the country's independence from the Soviets with Nazi Germany's assistance. After Hitler invaded the Soviet Union in June 1941, the group's members rose against Soviet rule and established a short lived provisional government — and also took part in mass killing of Jews and Poles.

Jonas Noreika was a member of the LAF and head of local administration in the city of Siauliai. In 1941 he helped execute the German military commandant's orders to move all local Jews to a newly created ghetto. The Germans were not interested in reestablishing the Lithuanian state, and Skirpa and Noreika soon fell out with them and were imprisoned. The former died in the United States in 1979. The latter became one of the leaders of anti-Soviet resistance in Lithuania. He was executed by the Soviets in 1947. 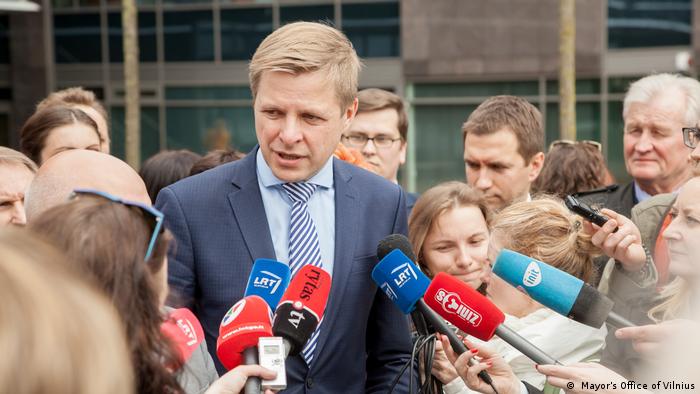 After the mayor signed the decrees to rename Kazys Skirpa Street  as  "Tricolor" — referring to Lithuania's flag — and remove the Jonas Noreika plaque, anti-Semitic leaflets and graffiti appeared in the capital and were quickly removed by the authorities.

"Those who did it are from minuscule ultra-right organizations one should not be afraid of," said Aleksandras Zubriakovas, an advisor to Mayor Simasius. The mayor and the city council had studied the issue and understood why some might consider Noreika and others like him heroes, he said. "But the mayor's position is firm: Those who committed such grave historical mistakes as he and Skirpa did, have no right to be commemorated by the city," Zubriakovas added.

Soon after the mayor's actions, the Lithuanian Jewish Community (LJC) and some of its members received telephone threats and letters signed with the names of some of the most infamous Holocaust perpetrators, said LJC head Faina Kukliansky (photo at top, in front of the synagogue). As a result, she closed Vilnius' main synagogue and the Jewish community center, which were reopened a day later after President Nauseda and Prime Minister Saulius Skvernelis issued public assurances that no threats to the Jewish community would be tolerated. 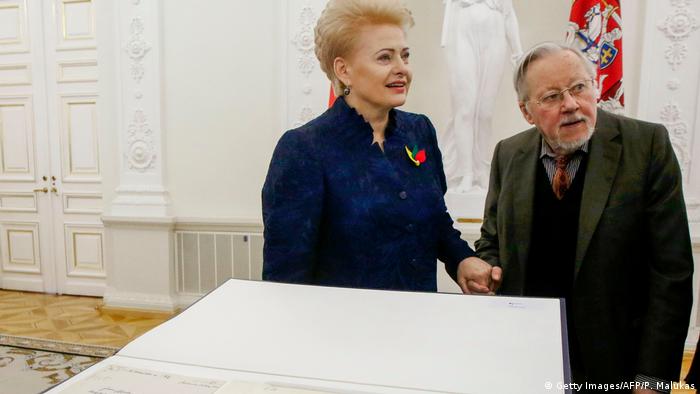 She has since come under fire from heads of Jewish communities from Vilnius and five other cities, who said her actions and comments could turn the rest of Lithuanian society against Jews.

"We are loyal citizens and do not feel any anti-Semitism," they said in a statement. The group said they supported Mayor Simasius' decisions and that the painful history of the previous century should be explored "deeply" and "according to Western standards."

"I shall speak out when I feel I have to," Kukliansky responded. "Because I speak for those who once lived here — and who are no more."

It is the "standards" that are — and will remain — the main bone of contention.

"One cannot judge historical figures only from today's point of view," said writer and political commentator Ramunas Bogdanas. "We should look at their actions in the context of their own time without losing our moral compass. Noreika did a bad thing when he helped send Siauliai Jews to the ghetto. They were robbed and, in fact, imprisoned. But neither he nor anyone else knew then that this was the beginning of the Holocaust."

Bogadanus' grandparents are among those honored as "righteous among the nations" at Yad Vashem, Israel's Holocaust Memorial, for saving Jews.

"When they say that all Lithuanians were Jew killers, I ask: What about my grandparents? What about President Vytautas Landsbergis' mother, who is 'righteous among the nations' too?" he asked.

Lithuania faces a checkered past

Anti-Semitism and far-right extremism are rising, while minorities' religious freedoms are being limited, says Pinchas Goldschmidt, who heads the Conference of European Rabbis. He fears for Jews' very existence. (12.05.2019)