Over the years Russia has repeatedly denounced its Baltic neighbor Latvia for "glorifying Nazism." A monument just unveiled in Latvia is a latest instance of how history remains a contentious issue for the two nations. 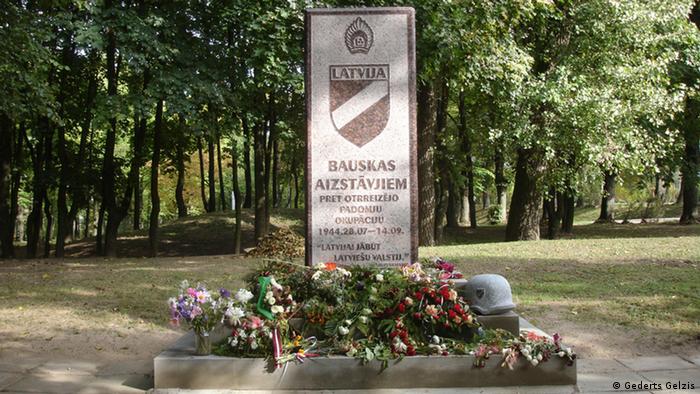 The monument is dedicated to the local residents of Bauska - a town of around 10,000 an hour south of Riga - who stood up to Joseph Stalin's army during the second Soviet occupation of Latvia less than a year before the end of World War II.

"Most of the volunteers who resisted the Red Army at Bauska died during the battle," said Imants Zeltins, who came up with the idea to build the monument as a proper burial for those who died. The 87-year-old was only 17 when he joined the round 300 volunteers in Bauska. 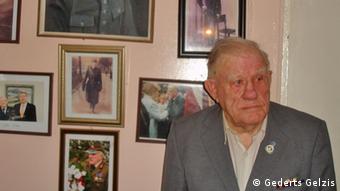 Imants told DW he fought for Bauska, not Hitler

"Our head of the district at the time, major Janis Uluks, was the only governor in Latvia who didn't run away to Riga or who didn't flee to the West when the Soviets approached," said Zeltins, who lost both his palms during the battle and was left dependent on his family for the rest of his life.

But he has no regrets about what he did, nor would the others who died or were injured, he said, because "nobody wanted to relive the atrocities under the first Soviet occupation in 1941: It was our duty to go and to fight."

But just after the monument was unveiled, Russia didn't hesitate to condemn it. Russia's State Duma as well as several Russian TV channels denounced it as a "glorification of fascism." They objected in particular that the structure, a five-meter-high cenotaph, has a shield engraved on it of the Latvian legionnaires. It also depicts a German army helmet, similar to those worn by Hitler's SS. 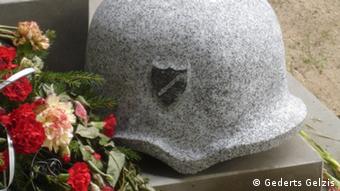 The condemnation was directed at a helmet on the monument

In addition, Belarus announced that some of the volunteers who defended the city had slaughtered civilians and Belarusian partisans during World War II. Thus, Minsk said the Bauska monument honored war criminals.

But the criticism hasn't only come from Russia and Belarus. A number of opposition activists sympathetic to Moscow, including a politician from the pro-Russian opposition party alliance The Harmony Centre, also denounced the monument.

"The mayor of Bauska announced in the media that it was a heroic move by the local inhabitants to fight against the Red Army in 1944, but we think that they took up arms in the ranks of the Waffen-SS," says Janis Kuzins, of the Riga-based NGO Union against Nazism. "And it was not the independence of Latvia they fought for; they did it for Adolf Hitler. Those 300 people joined forces with both Latvian and German legionnaires."

In fact, many of the locals who stood up to the Red Army in Bauska belonged to the Latvian Legion, a 115,000-strong force that was under the control of the SS. It was established on Hitler's orders in 1943 to beef up the East Front.

Historians remind that Latvia - in contrast to western Europe - was occupied three times during the Second World War. The Soviet forces first occupied Latvia in 1940, after which the Nazi Germany took over in 1941, and then the Soviets returned in 1944.

"The situation in Latvia and in the Baltic States was more complicated because the fight against one invader didn't mean independence would be restored," says Uldis Neiburgs, a researcher at the Museum of Occupation of Latvia. "In fact, it meant the return of another occupier."

Neiburgs explains that the fight against the invaders from the East came at a heavy price. "It is important to be aware of the fact when trying to understand the motivation of the Latvian legionnaires and their duality. Most of the Latvian soldiers who fought within the armed forces of Nazi Germany were called up against their own will." 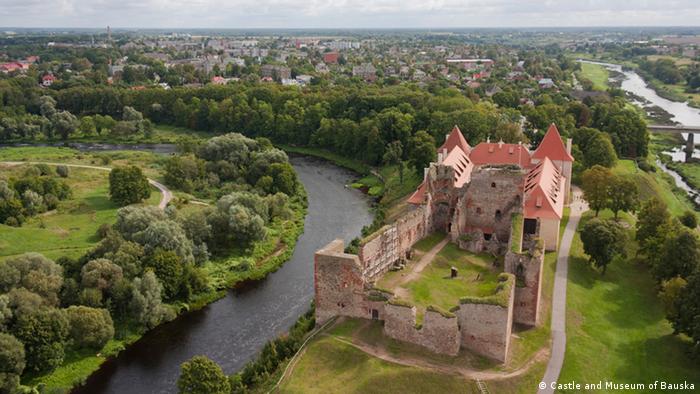 Political analyst Ivars Ijabs is not surprised by Russia's and Belarus's reproach because both the countries, especially Russia, tend to disapprove of everything that insults their view on what they see as the Great Patriotic War. According to Ijabs, the real concern in Latvia is that many of the round half million Russians living in Latvia share that opinion.

"For years the Russian minority in Latvia has been watching TV programs broadcast by Channel One, RTR, Rossiya Channel and others in Russia. And Latvia has practically failed to offer an alternative to the information and to the interpretation of history that these Russia's channels broadcast," says Ijabs. "That's why much depends on whether Latvia will start doing something about it."

Ivars Ijabs explains that many pro-Russian politicians in Latvia use historical cases like the Bauska monument to pursue their own agenda. Their condemnation, he argues, deals on the surface with Latvia's history, but in reality it is more directed at anti-Russian sentiment within the country.

That sentiment - or perhaps resentment - last came to the fore when Latvians resoundingly rejected a bid to establish Russian as the country's second official language, in a referendum earlier this year.