Are locally produced solar modules the future? | Environment | All topics from climate change to conservation | DW | 19.07.2021

Up until now, most solar panels have come from China. But shipping costs are making domestic production increasingly lucrative, even in Germany. Is this the start of a global trend? 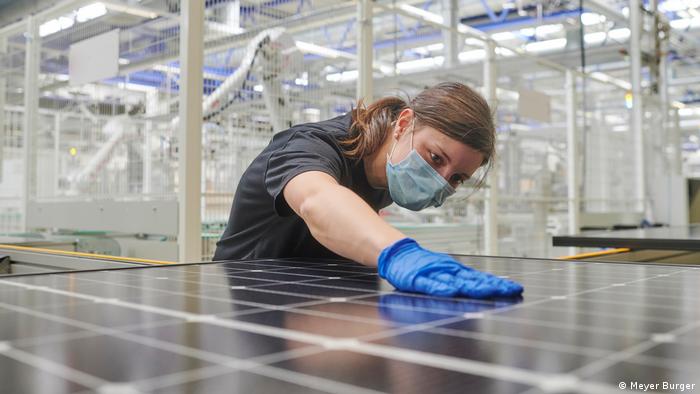 Wearing blue rubber gloves to keep off the dust, Sarah Neubert runs her fingers over the solar glass and checks the film at the first stage of the fully automated production chain.

Neubert is responsible for quality control at Meyer Burger's new solar module factory in Freiberg, near Dresden. Behind her are mobile stands and machines gleaming silver and white in a space the size of two soccer fields.

Glass panes are transported on conveyor belts. High-speed machine arms assemble solar cells, film, frames and junction boxes, which then are glued together under high heat. 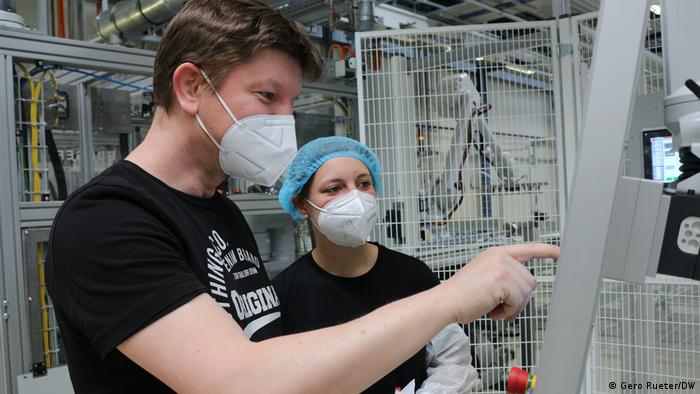 Production at this factory is computer-controlled. But skilled workers are still needed to oversee the process

"In the front of the factory, we start with a normal pane of glass, and out the back comes the finished module," Neubert says.

At the end of the production line, each module is checked with a flash test: If the voltage is incorrect, Neubert, her shift supervisor and the computer experts search for the error as a team.

"A lot of it is automated. But we can't do completely without people here," Neubert says.

"This is a technological shift," says Gunter Erfurt, CEO of Meyer Burger.

Meyer Burger also produces solar cells, the key component for modules, in another factory near Leipzig, 150 kilometers (90 miles) away. Both plants are located in the eastern German state of Saxony.

Modules and new jobs for the region

Neubert is excited to be part of the new production facility in her hometown of Freiberg.

"The solar industry has always interested me, which is why back then I did my apprenticeship here with Solarworld," she says.

But the German manufacturer Solarworld lost the price war against Chinese competitors and went bankrupt in 2018, leaving the factory building in Freiberg empty until Meyer Burger's new production moved in.

Production here started with with a capacity of 0.4 gigawatts (GW) of solar modules per year, and this is expected to increase tenfold in the next few years. By 2026, the company plans to sell some 5 GW of modules annually in Germany, Europe and the US . 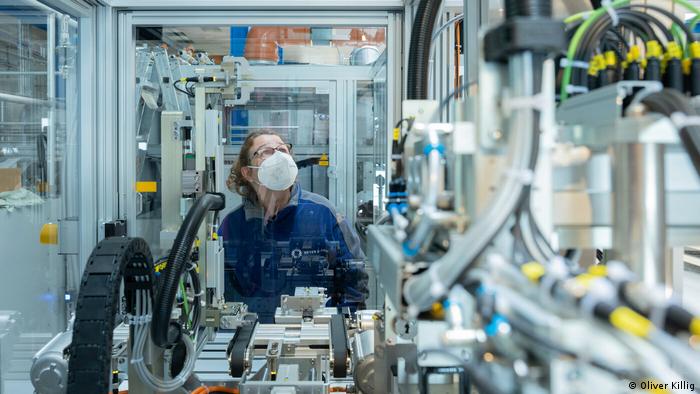 That is about as many solar modules as were installed across all of Germany last year.

As production grows, so does the need for labor. So far, some 200 colleagues work around the clock in the module plant, another 150 in the solar cell factory. 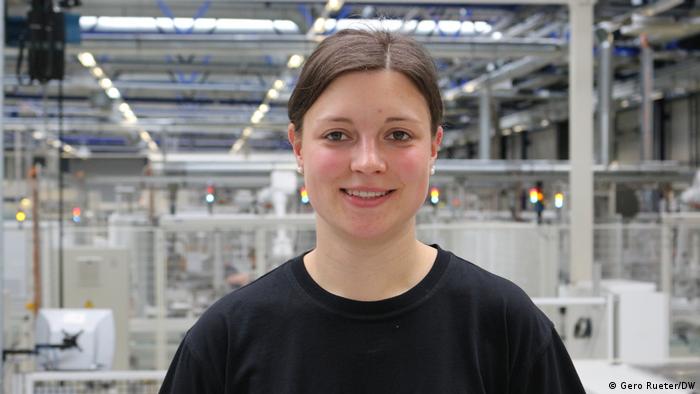 Until now, the company has been the market leader in building specialized machines for this type of solar factory. In 2020, instead of selling the new heterojunction SmartWire technology to other manufacturers, they decided to enter instead into module production directly, with their own proprietary machines and technology.

Their locations in eastern Germany already had qualified personnel and a good infrastructure. And it was a particularly good time to invest in new factories, says Erfurt.

"Photovoltaics have become the cheapest way to generate electricity. That wasn't the case five years ago. And certainly not 10 years ago. In the meantime, the price development has made huge leaps so that there are no longer any barriers," he says.

China recognized the importance of photovoltaics as a source of energy earlier than other countries, and it has been supporting the development of its domestic solar industry for over a decade.

Manufacturers in Europe and elsewhere have had far less support from their governments. However, more and more companies are now planning domestic module factories to meet the growing demand for solar power systems in regional markets.

In Turkey, for example, a new module and cell factory with a capacity of 1 GW was opened last year. In India, one manufacturer is planning a new 2 GW factory in Gujarat. And in Wroclaw in western Poland, a solar factory for the production of organic solar cells was opened in June.

In southern Spain, near Seville, regional module production of 5 GW per year is underway to supply the large solar parks in the region. This is where Europe's cheapest electricity is produced, thanks to the particularly strong sunlight there. 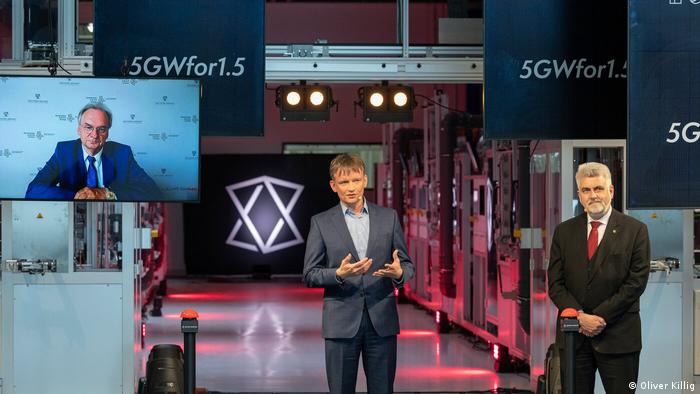 Last year, photovoltaic systems with a capacity of 139 GW were newly installed worldwide, up from 115 GW in 2019. In 2021, according to estimates by Bloomberg Energy Finance, this number will be as high as 209 GW. Last year, 99 percent of all solar modules worldwide  were produced in Asia,the vast majority in China.

Transporting modules from Asia to Europe accounts for about 10% of the cost.

"We are talking about energy infrastructure here, and that should be developed where the products are being used," Erfurt says.

"It is complete nonsense to ship solar modules halfway around the globe," he adds. "Modules should be manufactured in regional markets. This is how energy sovereignty can be established at a low cost with leading technology."

Erfurt is certain that most countries "will want to produce solar modules themselves at some point" in order to reduce dependency on imports. Another advantage of regional production, he says, is stronger customer loyalty: Domestically produced modules are frequently more valued by consumers and in greater demand.

Because of the climate crisis, governments, companies and consumers are seeking ways to quickly replace coal, oil and natural gas. 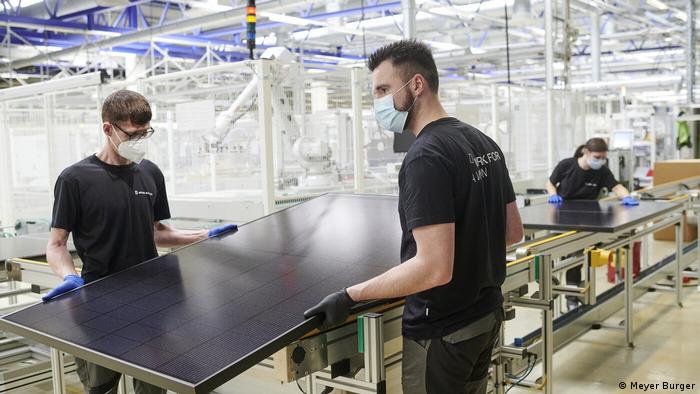 High-quality products made in Germany, an important criterion for some customers

"My prediction is that modules with a capacity of 500 GW will be produced worldwide in 2025, 1,000 GW in 2030 and many thousands of gigawatts per year thereafter," says renowned solar researcher Professor Eicke Weber. The former president of the Fraunhofer Institute for Solar Energy Systems is now president of the European Solar Manufacturing Council.

The other important factor is the unbeatably low price, Weber says: "We can now produce solar power in southern Europe for 1.5 cents per kilowatt hour, and soon for just 1 cent. This means that all other types of electricity production are quickly becoming of basically no interest."

Chile catches the sun with 10,000 mirrors

Chile catches the sun with 10,000 mirrors