Germany will be able to keep its Tornado jets stationed in Afghanistan. The country's highest court dismissed a complaint concerning the Bundestag's decision to deploy six reconnaissance aircraft to southern Afghanistan. 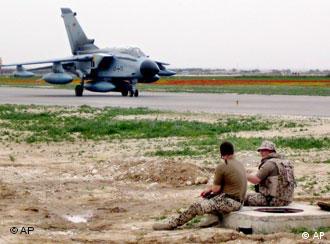 Germany has six Tornado jets and about 3,000 troops in Afghanistan

The Left Party had filed a complaint with Germany's Federal Constitutional Court. The pacifist party, made up mainly of disgruntled Social Democrats and former Communist Party members, charged that the parliament's decision to allow the mission violated a 1955 law governing Germany's role in NATO.

The six Tornado warplanes have been used to fly reconnaissance missions for NATO forces since mid-April. The planes are accompanied by approximately 200 military personnel.

Under the mandate given to them, Bundeswehr troops are prohibited from participating in combat missions. Members of The Left Party have said they are concerned that the Tornado deployment would lead to troops becoming mired in fighting. 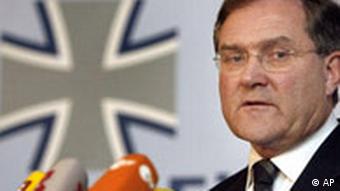 Jung has been a supporter of keeping troops in Afghanistan

German Defense Minister Franz Josef Jung welcomed the ruling and said he expects the parliament to approve an extension of the mandate this fall.

"I am happy the constitutional court confirmed the position of the government that the deployment of the Tornado jets is constitutional and complies with our basic law," he said at a security conference in Berlin. "I think that is an important message for our soldiers, who are making an important contribution to peace and stability. The Tornados offer protection to our soldiers and the (civilian) population."

The court ruled that the mission serves to protect "the security of the Euro-Atlantic region."

Foreign Minister Frank-Walter Steinmeier echoed Jung's comments, saying the Tornado jets were helping with the security and rebuilding of Afghanistan. 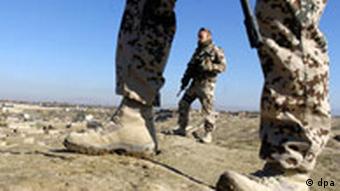 German troops are part of a NATO peacekeeping mission

The court ruled the parliament did not exceed its authority and dismissed the case Tuesday, saying that the German government should be allowed maneuvering room in questions of foreign policy.

Germany currently has about 3,000 soldiers serving with the NATO-led International Security Assistance Force (ISAF) mission in the north of the country.

The Tornados are equipped with two high-tech optical cameras along with an infra-red sensor in a pod slung below the fuselage.

Their mission is to spy out Taliban positions in the southern provinces of Helmand, Kandahar and Uruzgan, where British, Canadian and Dutch troops are deployed. 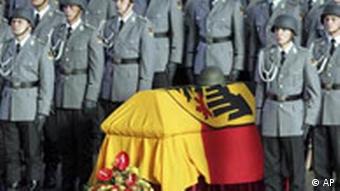 Three German soldiers were killed in Afghanistan this spring

Under the terms of their six-month mission, they will not fly at low- level and will not be used to bomb Taliban positions. The German government has been adamant that the planes will not be used as fighter jets.

"The reconnaissance gathered by our Tornadoes will bring more stability and security to Afghanistan," German Defense Minister Franz Josef Jung said when the planes were first deployed. "Their mission is to protect ISAF troops, as well as civilian aid workers and the Afghan population." 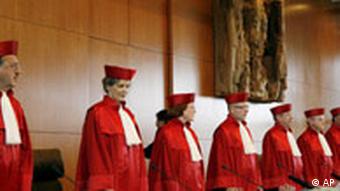 Members of the constitutional court hand down their opinion

The Tornado mission will last until October under its current mandate. A lengthy debate is expected this autumn when the Bundestag debates an extension of the Bundeswehr's NATO mandate.

Deployment of Tornado jets has been controversial with the German public as well. Surveys show that many fear Germany will become a target for terrorists if the Bundeswehr is seen as aiding NATO's mission in Afghanistan. A poll by the TNS institute earlier this spring showed 57 percent of those surveyed wanted a complete withdrawal of German troops from Afghanistan, while 36 percent were in favor of continued engagement. Only 4 percent backed increasing the German military presence.

"The Federal Constitutional Court Is Not the Only Actor"

DW-WORLD.DE spoke to law professor Ulrich Battis about the political power of the Federal Constitutional Court before its ruling Tuesday concerning the deployment of six German Tornado reconnaissance jets in Afghanistan. (03.07.2007)

The use of German military jets to film a protest camp during last week's G8 summit has sparked a heated debate. The opposition Green party is even threatening to take the case to the federal constitutional court. (14.06.2007)

A suicide attack by the Taliban, which killed three German soldiers and injured five others, has brought renewed calls from the left for the government to rethink the Bundeswehr's mission in Afghanistan. (21.05.2007)