Hezbollah and allies set for majority in Lebanon elections

The Iran-backed Hezbollah group and allies won just over half the seats in Lebanon's first parliamentary election in nine years. The vote dealt a blow to Prime Minister Saad Hariri's legislative bloc.

Hariri's Saudi-backed movement lost a third of its seats, but the prime minister said the 21 seats his Sunni movement won in 128-seat house was "not the end of the world." He called on the international community to look at the results in a "positive way" as a sign of Lebanon's democracy.

Results showed that Hezbollah, along with allied groups and individuals, secured at least 65 seats. Hezbollah is allied with the Shiite Amal Movement, led by Parliament Speaker Nabih Berri, and the Christian Free Patriotic Movement (MPF), founded by President Michel Aoun. However, Hezbollah's number of seats remained the same at 12.

"The new parliament represents a guarantee for protecting ... the country's stability," he said.

Hariri likely to form next government

Lebanon's sectarian power sharing system dictates that the prime minister must be a Sunni, the president Christian and speaker of parliament a Shiite.  This means that Hariri will likely continue to occupy the post, as his Sunni parliamentary bloc will be the strongest in parliament.

In his comments  Monday evening, Hariri pledged to continue working with all parties.

The outgoing government included all of the major parities, including Hezbollah.

The parliamentary distritution of seats is also based on confession, with Christian denominations and Muslims each allocated 64 seats. Among Muslims, seats are further allocated with Sunnis and Shiites each getting 27 seats and Druze and Alawites receiving 6 and 2 seats, respectively.

Experts believe that the complicated balance of power between various religious factions is set to remain mostly unchanged.

The outcome of the vote cements Hezbollah's dominance in Lebanon, but also underlines Tehran's growing influence in the area and likely draw ire from its regional rivals, namely Israel and Saudi Arabia.

Hezbollah has grown in strength and regional influence since joining the war in Syria in 2012 in support of Syrian President Bashar Assad. Its growing influence in turn reflects Iran's territorial ascendancy in the Middle East, which stretches through Iraq and Syria to Beirut.

Hezbollah, which was founded in the 1980s to fight against Israel's invasion of Lebanon, has been branded a terrorist group by the US. The European Union, meanwhile, only lists Hezbollah's military wing as a terror group, differentiating between its militaristic and political activities.

The election results could put at risk billions of dollars in US military help to Lebanon, as well as international aid and loans the country needs to revive its stagnant economy.

The election marks the first vote under the new proportional system, which replaced the structure where the winning party would carry all the seats in a particular district.

Education Minister Naftali Bennett said on Twitter that following these results, "the State of Israel will not differentiate between the sovereign State of Lebanon and Hezbollah."

The right-wing minister also said that Israel would hold Lebanon responsible for any possible Hezbollah action that originated from its territory. The comments come amid rising tensions between Israel and Iran over Syria, prompting concerns of a war that could spiral into a regional conflict.

Following a day of voting on Sunday, the Lebanese government  said only 49.2 percent of voters took part in the long-delayed election for the country's parliament. According to several political analysts, potential voters were discouraged by the stagnant economy and widespread corruption.

Observers  reported a higher turnout in some areas of Lebanon that are known as the strongholds of the Hezbollah movement. 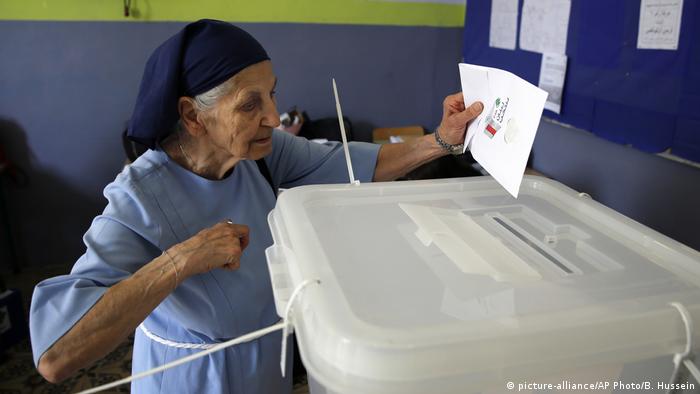 "This is a new law and voters were not familiar with it, nor were the heads of polling stations," Machnouk said in a news conference. "Voting operations were very slow."

Machnouk said a total of 7,300 complaints from the polling stations had been filed with the Interior Ministry, but did not provide details.

Other sources reported fistfights breaking out at numerous polling stations around the country, as rival parties accused each other of ballot stuffing. In the district of Choueifat south of Beirut, a crowd rebelled against a station supervisor and smashed a ballot box. Security forces also intervened in the clash between rival Christian parties in the eastern town of Zahle.

Sunday's Lebanese parliamentary elections were the first in nine years. Around 54 percent of voters took part in the last parliamentary vote in 2009. Instead of organizing another vote in 2013, lawmakers prolonged their terms on several occasions, citing security concerns over the war in neighboring Syria. Lebanon, with its population of 4.5 million, hosts more than 1.5 million refugees from the war-torn country.

Lebanese Prime Minister Saad Hariri has said he will postpone his resignation at the request of President Michel Aoun. Hariri said he hoped that the country could restart a national dialogue. (22.11.2017)