Lebanese Prime Minister Saad Hariri has said he will postpone his resignation at the request of President Michel Aoun. Hariri said he hoped that the country could restart a national dialogue. 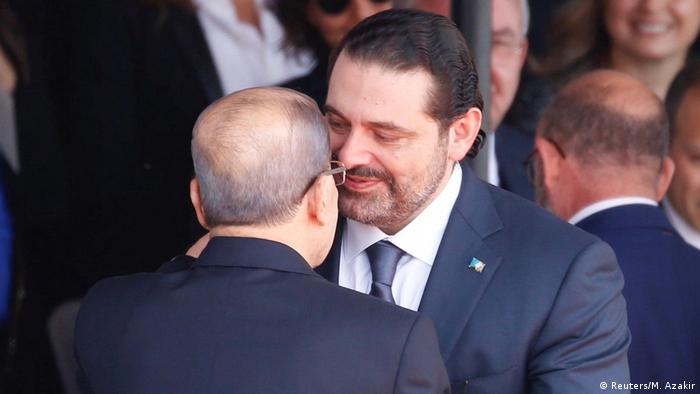 Lebanon's Prime Minister Saad Hariri said on Wednesday he would postpone his resignation at the request of President Michel Aoun.

"I presented today my resignation to President Aoun, and he urged me to wait before offering it, and to hold onto it for more dialogue about its reasons and political background, and I showed responsiveness," Hariri said in a televised statement.

Hariri arrived in Lebanon on Wednesday to attend independence day celebrations after a nearly three week absence following his surprise November 4 announcement from Saudi Arabia that he would resign due to alleged Iranian interference and Hezbollah taking control of the country. He also cited unspecified threats to his life.

The resignation announcement sparked a regional diplomatic and political crisis, with some senior Lebanese officials and politicians accusing Saudi Arabia of forcing Hariri to resign under pressure.

President Aoun, a Maronite Christian and Hezbollah ally, had said he would not accept Hariri’s resignation until he spoke with the prime minister in person.

The Saudi-backed Hariri is a Sunni, who has been in a coalition government that includes Hezbollah since last year. The Iranian-backed Shiite Hezbollah maintains a political party as well as an armed militia that is better armed than Lebanon’s own armed forces.

Iran and Saudi Arabia are regional rivals vying for influence across the Middle East.

The crisis in Lebanon has stoked concerns that the Saudi-Iranian rivalry could destabilize Lebanon,  which fought a brutal 1975-1990 sectarian civil war.

Tensions between Saudi Arabia, Lebanon and Iran are putting a strain on the entire region, with Israel at risk of being drawn into a war with Hezbollah, as Tania Krämer reports. (13.11.2017)