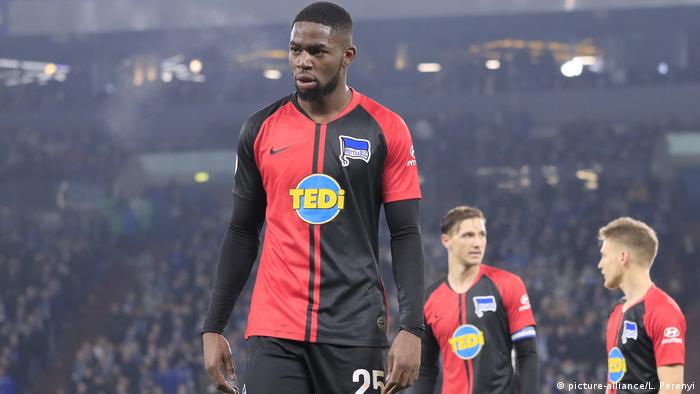 A statement released by Schalke's board of directors on Tuesday said that they were taking Jordan Torunarigha's (pictured above, left) allegations of racial abuse "very seriously" and that the club was working with the local police and security services on the case.

"The club has zero tolerance for such behaviour. We will do everything we can to find those responsible and impose sanctions," the statement read.

"Such behavior not only violates Schalke stadium rules, its guiding principles and statutes, but it also contradicts all of our values. We will respond with sanctions and report the incidents accordingly."

"I'm so sorry that he was racially abused from the stands - I can't imagine what that feels like. I can't even begin to contemplate what it would be like, and even then it still boils my blood, so it must be much worse for him."

Stark, who spoke of having heard "monkey noises" coming from the stands, also said the abuse would partially explain why Torunarigha, a German of Nigerian descent, was sent off in extra time. The Hertha player had fallen into Schalke coach David Wagner after being brought down in a sliding tackle. Torunarigha picked up a case of drinks and slammed it down, resulting in a second yellow card. Wagner was also ejected over the incident.

Although he said he had not personally heard the abuse, Wagner apologized for the incident in the post-match press conference.

"If Jordan Torunarigha was racially abused, I would like to apologize to the player and to his club on behalf of Schalke," Wagner said.

The allegations are just the latest of several incidents of racism that have marred European football in recent years.

Referee Harm Osmers should have reacted much more strongly to the alleged racist abuse suffered by Hertha Berlin defender Jordan Torunarigha, says Stefan Nestler. His team could also have sent a much bolder message. (05.02.2020)

Clemens Tönnies, head of Schalke's supervisory board, will temporarily step down after he was found to have broken anti-discrimination rules. But a club committee said his controversial comments on Africa weren't racist. (07.08.2019)