Hertha Berlin show how smart they have become

Having picked up four points in the two games against Bayern Munich and Borussia Dortmund this season, Hertha Berlin are brimming with confidence. Pal Dardai has made the team from the capital a wiser team. 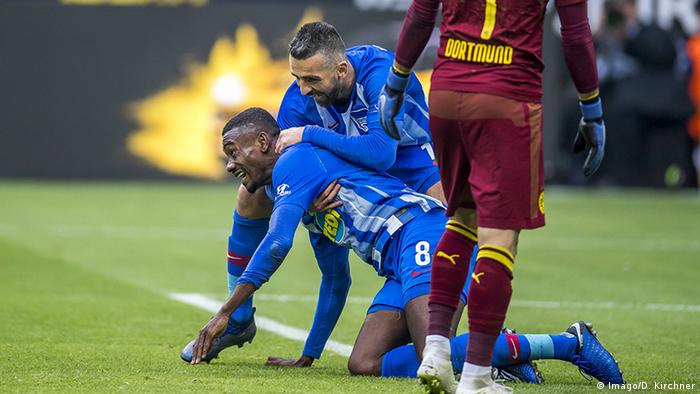 There were four goals at the Westfalenstadion again on Saturday but, unlike against Atletico Madrid in the Champions League in the week, they weren't all for Borussia Dortmund.

This time, two of them were scored by Hertha Berlin who, having already beaten Bayern Munich 2-0 earlier in the season, twice came from behind to secure a hard-fought 2-2 draw and continue their positive start.

The Berliners have been praised for their more expansive football this season, a welcome change for fans of a team known more for their consistent rather than exhilarating style.

"The idea that we've been playing 'ugly football' is a media thing," Hertha coach Pal Dardai had told Berlin's Morgenpost ahead of the match. "But we haven't reached seventh, sixth and tenth place and qualified for the Europa League by playing ugly football."

Nevertheless, the 42-year-old still reverted to a back five in an attempt to keep a rampant Dortmund attack, which had scored 26 goals in their last six games, at bay. "Today, the key is not going to be to play beautiful football," Dardai admitted to broadcaster Sky.

Indeed, with more possession, more passes and more shots, Dortmund dominated for large periods and twice led through English starlet Jadon Sancho. Dortmund were guilty of missing chances which could have put the game beyond their visitors, but they didn't and Hertha took advantage. 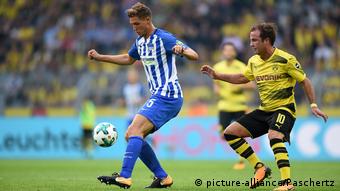 Hertha Berlin battled back to a late draw

"We want to press better in midfield to prevent our opponents from building up speed," Dardai had told the Morgenpost – and that plan worked perfectly just before halftime. Maximilian Mittelstädt pounced on a loose pass from Mahmoud Dahoud before delivering a great ball for Salomon Kalou to scramble home past Roman Bürki.

The equalizer, a penalty from Kalou after Dan-Axel Zagadou got tangled up with Davie Selke, was not part of the game plan, but perhaps what Hertha deserved for their smart approach.

"We might not have players like Paris Saint-Germain – but we still have good lads," Dardai had insisted. "With Valentino Lazaro at right-back and Ondrej Duda in the middle, we have playmakers on the field."

Indeed, a slow starter when he first joined Hertha, Slovakian international Duda has been electric this season, scoring six goals already. Duda, like Hertha, seem to have taken a leap forward this season as Dardai has moved the club further along on its developmental cycle. Sporting director Michael Preetz has said that a title would do Hertha good but Dardai still thinks that would be "a miracle."

"We're just going to try and annoy Dortmund a bit today so that the table looks a bit better for Niko," he had joked, in reference to his former Hertha teammate and current Bayern coach Niko Kovac. With Bayern Munich winning away at Mainz to close the gap on Dortmund to two points, Hertha certainly managed that.

But that won't really concern the Berliners, who are proving that it's not necessarily about solidity or flare, attack or defense – but about picking the right tactics for the right battles. They did that against Bayern at the end of September, and, almost a month later, they did it again against Dortmund.

As Dardai said: "How can successful football be bad football?"

Bayern Munich got back to winning ways in the Bundesliga, even if only just. Düsseldorf remain a team in trouble, as do Hannover, while Hertha surprised against a big team once again. (27.10.2018)