For decades, Swedes have used the vestigial heat in the bedrock to heat their homes. The technology, called "rock energy", is much more efficient than traditional heating methods, and is virtually emissions free. 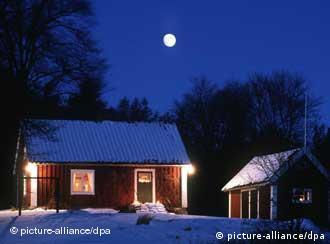 Nils Raambin is a seventy-eight year old former building technician who refuses to retire. He stands in a bustling square in Uppsala in front of a new-looking housing block, proudly explaining that the 97 apartments, 12 shops and two supermarkets in the building all use "rock energy".

Before Nils Raambin got his hands on the building, it was a drab, run-of the-mill 1970s housing block. The transformation of the renovated facades and the square is impressive. And it's all been done with the money saved on heating.

"We had money over to rebuild our balconies, and to cover an outside room with glass! The owners didn't have to pay anything. The heat pump paid," said Rambin with a laugh.

According the Rambin, the heat pump and rock energy system installed in these blocks has halved the energy costs.

The apartment owners also make extra money be selling their unused "rock" energy to the shops and cafes lining the square.

The energy is gained from holes dug 150 metres into the rock. Water runs down each hole in a tube, and at the bottom, absorbs a few degrees of heat from the bedrock, which is at a constant seven degrees. 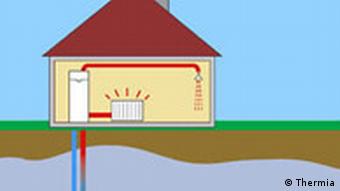 Diagram of how a vertical "rock heat pump" works

The water then flows back up the tubes and into the houses, where it is heated further in a heating pump. The energy absorbed is enough to provide radiator heat and hot water.

The key here is the few degrees picked up down in the bedrock. Although the geothermic heating system itself needs some electricity to run, it gets more energy back than is put in, because of the free energy picked up in the bedrock

The Swedish firm Thermia, based in Uppsala, is one of the largest producers of the heat pumps that are needed to source this energy.

Hundreds of kilometres north-west of Uppsala is another Thermia installation.

Anders Delarose's villa lies in a part of Sweden that gets extremely cold in the winter -- temperatures here sometimes fall below minus thirty degrees. Still, the heat pump system keeps Delarose, his family and his dog warm.

Thermia has been in the heating business for more than a hundred years. In 1889 it produced wood stoves, and moved on to producing hot water tanks and boilers in 1923. Fifty years later, in 1973, they developed Sweden's first modern heat pump. And in 2000, they introduced an online control mechanism. So anyone with a Thermia system in their home, can now control it using the internet.

Today, Thermia's annual turn-over is sixty-seven million dollars and they employ 265 people. For Thermia, the world’s precarious energy situation is nothing but good news.

"High oil prices are the best thing that has happened to us," said Sten Lilienau, head of marketing at Thermia’s Arvika factory. "And also the CO2 targets in the Kyoto agreement. So those are the two biggest drives for heat pumps in Europe."

Sales of the heat pump in Sweden have grown between 15-20 percent in the last year, and Thermia's factory in Arvika is running at full speed, to keep up with demand from other European countries. 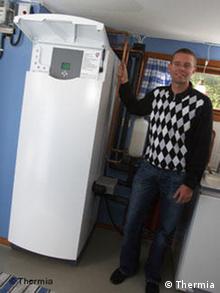 The "rock" technology is adaptable -- in countries with very little bedrock, like the Netherlands, the tube for collecting heat is simply laid in the ground water, which also keeps a steady temperature.

The technology is fully established in Sweden, where two thirds of every new or renovated home has heat pumps. Now, Thermia hopes to take the heat pumps to the rest of Europe. According to Thermia’s Senior Vice President, Mats Bergsjoe, the pumps are not only good for heating and hot water, but can also be adapted for cooling. And for Bergsjoe, the advantages of the pump system are obvious.

"This is a very environmentally friendly heating system .. because 75% of the energy used by heat pumps is solar energy. So it's clean, it's energy efficient and very good for the environment."

The are some negatives to the heat pump, such as the relatively high initial installation cost. The system is adapted for water-based heating systems, but many European houses rely on gas or electric heaters. This means they would need extensive upgrading before a heat pump and rock energy technology can be installed.

This wasn’t a problem for Nils Raambin in Uppsala because the apartment blocks there already had water-based heaters. Raambin can only speak well of "rock energy".

And there was another positive side effect --the water fountain in the middle of the square comes from ground water hit during drilling.

" We dug down a water pump in the hole. So, that's for free too," Raambin said.

Heating with Rocks in Sweden