The head of the UN's development agency for Asia, Rima Khalaf, has resigned after refusing to withdraw a report branding Israel an "apartheid state." The report has been decried by Israel, the US and senior UN officials. 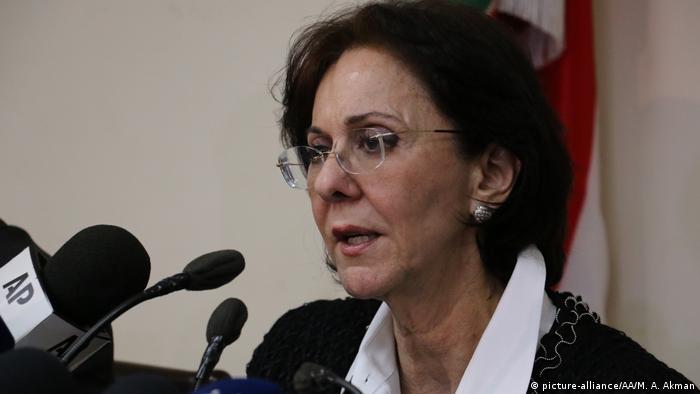 Washington's ambassador to the UN has called for the damning report to be withdrawn immediately. The UN secretariat has distanced itself from the publication, saying it solely reflects the authors' views. (16.03.2017)

The head of the UN agency for development in Arab countries resigned Friday after saying she was pressured to withdraw a controversial report that accused Israel of establishing an "apartheid state."

Published on Wednesday by the Beirut-based UN Economic and Social Commission for Western Asia (ESCWA), the report accused Israel imposing an apartheid regime on the Palestinian people, "which amounts to the commission of crimes against humanity." Titled "Israeli Practices Toward the Palestinian People and the Question of Apartheid," the report prompted outrage from Israel, the United States and various officials within the UN Secretariat, all of whom immediately called for the report to be revoked.

At a press conference in Beirut on Friday, head of the ESCWA, Rima Khalaf, announced her resignation after she refused to pull the report from the agency's website at the behest of UN Secretary General Antonio Guterres. "I asked him to review his position but he insisted on it," Khalaf said. "Based on that, I submitted to him my resignation from the United Nations."

Khalaf also said that pressure to take down the report, which is no longer available online, did not come as a surprise: "It was expected, naturally, that Israel and its allies would exercise immense pressure on the UN secretary-general to distance himself from the report and to ask for it to be withdrawn."

She added that she stood by the report's findings: "It concludes scientifically and according to international law that Israel has established an apartheid regime."

Stephane Dujarric, a spokesman for the UN, was quick to distance the organization from the report, saying it was published without any consultations with the UN Secretariat.

He also confirmed that Guterres had ordered that the report to be taken down but sought to make clear that the request was "not about content" but about "process."

"The secretary-general cannot accept that an under-secretary general or any other senior UN official that reports to him would authorize the publication under the UN name, under the UN logo, without consulting the competent departments and even himself," Dujarric said.

Dujarric also denied that the order showed that the UN had yielded to pressure from the United States.

Khalaf's resignation was nevertheless welcomed by Israel's envoy to the UN, Danny Danon, as well as by the US ambassador to the UN, Nikki Haley.

"Anti-Israel activists do not belong in the UN," Danon said. "It is time to put an end to the practice in which UN officials use their position to advance their anti-Israel agenda. Her removal from the UN is long overdue."

Khalaf had long drawn ire from Israeli officials, who accused her holding of anti-Israel sentiments.

In a statement, Haley said: "When someone issues a false and defamatory report in the name of the UN, it is appropriate that the person resign. UN agencies must do a better job of eliminating false and biased work, and I applaud the secretary-general's decision to distance his good office from it."

Palestinian rights activist Omar Barghouti, however, came out in support of the report, praising it as the "first beam of light that ushers the dawn of sanctions" against Israel.

Ethiopian Prime Minister Abiy Ahmed made the appeal for Africa to gain more power at the UN during his opening remarks at the African Union summit in Addis Ababa.