Two terror attacks in the northwestern region and the military's claim of averting "Islamic State" attacks have put a big question mark on the "success" of the Pakistani army's Zarb-e-Azb operation against Islamists. 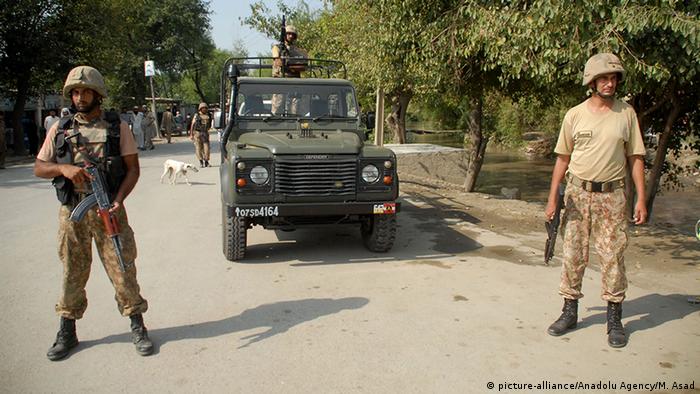 A suicide bomber targeted a court in the northwestern city of Mardan, killing at least 12 people just hours after gunmen stormed a Christian neighborhood in Peshawar - some 30 miles from the site of the second attack - leaving one member of the minority Christian community dead. Both attacks were claimed by the Jamaatul Ahrar (JA) organization, a splinter group of the Tehreek-e-Taliban Pakistan (TTP).

It is not the first time that Islamists have targeted lawyers or the Christian community in Pakistan. In March, a Taliban bomber attacked Christians celebrating Easter in Lahore, killing some 70 people. On August 8, a suicide bomber killed 77 people, mostly lawyers, in an attack in the southwestern city of Quetta. The attack was claimed by both the Taliban as well as the self-proclaimed "Islamic State" (IS).

The militant groups continue to target civilians despite the military's claim that its Operation Zarb-e-Azb, which has been ongoing for more than two years, has been a huge success.

A day before the Mardan and Peshawar attacks, Asim Bajwa, the Director General of the Pakistani army's Inter-Services Public Relations (ISPR), said that security forces had killed 3,500 terrorists since the launch of Zarb-e-Azb military campaign in June 2014. 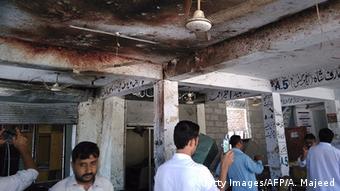 Jihadists have increased their attacks on lawyers

The powerful military has used the pretext of combating terrorism to set up its own courts that now run parallel to the South Asian country's civilian judicial system. The military courts have hanged hundreds of terrorists over the past year and a half, claiming that as a "huge blow" to the militant outfits.

The army has also made sure that Zarb-e-Azb receives massive media promotion. Consequently, from the ISPR tweets to the military-funded patriotic songs and heaps of praise for the operation from many security analysts, the Pakistani people have been told that peace has been restored all across the country.

However, some analysts say that the Quetta bombing in August, and now the twin northwestern attacks, have exposed major flaws in the military's anti-terror strategy.

For the first time, the government has officially acknowledged that IS is trying to make inroads into Pakistan as well.

"They [IS] tried to [sneak] into Pakistan but failed and [were] apprehended," Bajwa told reporters on Friday.

He said that major IS attacks on targets including the Ministry of Foreign Affairs, foreign embassies, consulates and their staff, Islamabad airport, prominent public figures, media persons and law enforcement personnel, had been averted.

In this situation, many people ask: Is Zarb-e-Azb really working?

Aqil Shah, a Pakistani expert and the Wick Cary Assistant Professor of International Affairs at the University of Oklahoma, says that there is a fundamental contradiction in the Pakistani military's counterterrorism approach, pointing out that while the army goes after the terrorists who carry out attacks in Pakistan, it patronizes those who attack its enemies.

"The army has fought hostile factions of the TTP, but it continues to use other militant groups as proxies against archrival India," Shah told DW, citing the Haqqani network and the Afghan Taliban, which help maintain Pakistan's influence over Afghanistan, as well as Lashkar-e-Taiba, which fights Indian security forces in Kashmir. 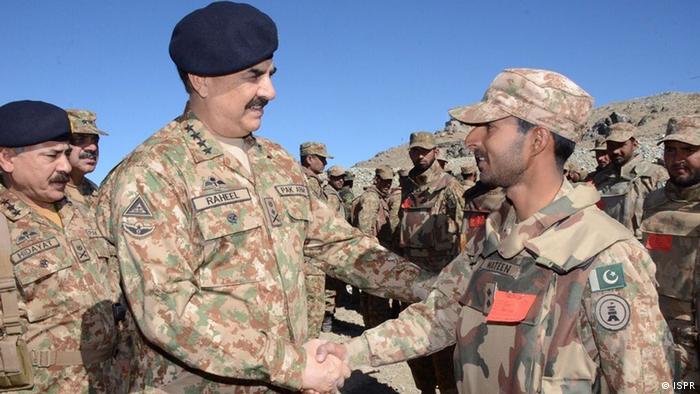 That's exactly what US Secretary of State John Kerry pointed out during his recent India visit.

"It is clear that Pakistan has work to do in order to push harder against its indigenous groups that are engaged in extremist terrorist activities," Kerry said in an address to students in New Delhi. "They must work with us to help clear the sanctuaries of bad actors who are affecting not only relations between Pakistan and India but also our ability to achieve peace and stability in Afghanistan," he added.

"Actually, it was aimed at weakening political parties and not eliminating terrorists. Some of the top global terrorists such as Hafiz Saeed and Hizbul Mujahideen's Yusuf Shah are openly leading public rallies, recruiting jihadists, and fundraising," Jamal told DW.

But General Asim Bajwa, director general of the ISPR, told DW in an interview in June that the ongoing military operation in the country's northwestern areas was targeting all militants, including the Haqqani Network.

"The military has no preferences. We are targeting terrorists from all groups," Bajwa said.

Bajwa, who was on a Berlin visit, also said the criticism from the West that the Pakistani army was not "doing enough" against Islamists was "both regretful and unjustified."

"I would say that the international community has not done enough for us," Bajwa stated. "The military crackdown is worthy of all the efforts. We have eliminated the terrorists from the area, and the people are very pleased with our efforts," he stressed.

But rights organizations are critical of Pakistan's counterterrorism measures. One of the major concerns in a document released last year by the International Crisis Group (ICG) is related to the Pakistani military's continued dominance over the civilian administration.

The ICG paper also advises PM Sharif to take matters into his own hands and democratize the anti-terrorism strategy "in order to replace an overly militarized response with a revamped, intelligence-guided counterterrorism strategy, led by civilian law enforcement agencies, particularly the police."

Prominent Pakistani rights activist Asma Jahangir recently accused the army of running a smear campaign against politicians and PM Sharif in an attempt to weaken his government so that the military keeps an upper hand over the civilian administration. 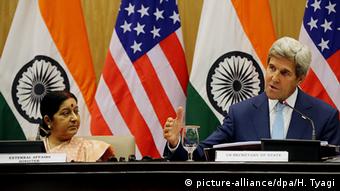 On his India visit, Kerry chose to be tough with Islamabad

"Despite Pakistani efforts in fighting terrorism, the country's military and intelligence agencies are still following the traditional 'two-track policy,' which one can also describe as the 'state-sponsoring of terrorism,'" Brussels-based South Asian researcher Siegfried O. Wolf told DW.

The international community should continue its cooperation with Islamabad, but must not compromise on human rights issues and Afghanistan's security, the expert noted.

"There should be cooperation, but not at all costs," he added.

Why Germany should be critical of Pakistan's military leadership

Chaos has gripped Afghanistan amid the withdrawal of NATO troops from the war-torn country. Authorities in Islamabad hope it won't spill over to Pakistan, but experts say they might not be able to prevent it.