Harley-Davidson: The iconic symbol of the American dream

As Harley-Davidson gears up to outsource more of its production for the European market — much to the dismay of many Americans who see it as a symbol of freedom — a look at the iconic symbol's role in film.

The trade conflict between the US and the EU is boomeranging back to the White House. As the EU must now pay higher tariffs on the export of select products, they have retaliated by equally increasing duties on some US products, among them motorcycles including the much-beloved Harley-Davidson. Like no other brand, it stands for the American dream, freedom and strength. Trump himself once called the legendary Harley-Davidson the very embodiment of "made in America."

With a feared drop in exports due to the taxes, the company has decided to outsource portions of its production in order to avoid losing too many customers outside the US.

For judges and outlaws alike

But how precisely did the Harley-Davidson achieve its cult status? It's quite likely that it all began with a certain closeness to lawlessness. After World War II and the Vietnam War, the motorcycle was often the chosen means of transport of men who felt marginalized in US society. That's at least the theory of sociologist and consumerism researcher Kai-Uwe Hellmann who presented his views in an interview with the German daily Handelsblatt. At the same time, Hellmann added, the Harley has come to symbolize a mixture of typically American values and a self-determined lifestyle. The motorcycle is associated with the biker gang scene while also enjoying a reputation as one of the world's most expensive motorcycles, especially in terms of its maintenance. 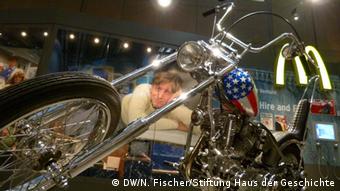 In fact, the legendary motorcycle is so expensive that most of its purchasers tend to be wealthy old men. After work, they take off their judge's robes and surgical gowns, put on their biker leathers, and pull their Fat Boys out of the garage to go cruising around the suburbs. While producing a trademark rumble, the motorcycles give their owners a feeling of being desperados, riding their iron horses towards the sunset. It's the illusion of a bit of "dirt" in their glossy daily lives. Another ingredient in this experience is the deep powerful sound of rattling and crackling motors that seems to empower the proud bikers.

Heavy presence on the big screen

Movies like Easy Rider have greatly added to the bike's cult status. The 1969 road movie fuelled the cliché of lawlessness, biker romance, and of desperate and tough guys. In our picture gallery, we present five films in which the Harley makes its glorious appearance.

US President Donald Trump has accused Harley-Davidson of using tariffs as an excuse to move production for European customers overseas and threatened the motorbike maker with a "big tax" on its imports to the US. (26.06.2018)

The iconic American motorbike manufacturer will shift some of its production out of the US. It expects rising costs from higher European tariffs imposed on Friday in retaliation against Donald Trump's metals tariffs. (25.06.2018)