Hamburg couldn't find a point (or a goal) against Hannover, as their problems continued from last season. Eintracht Frankfurt, meanwhile, missed out on a chance to move top of the table against FC Augsburg. 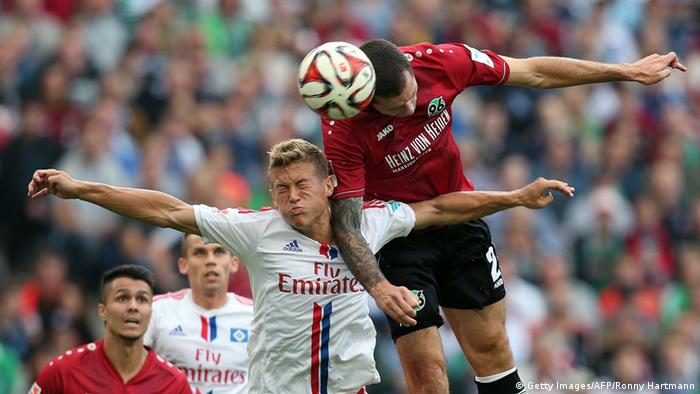 Eintracht Frankfurt missed a chance to move into a three-way tie for first with Bayern Munich and Bayern Leverkusen in the Bundesliga table. Instead, Augsburg picked up their first points of the season.

A scene in the early stages of Sunday's first Bundesliga match between Eintracht Frankfurt and Augsburg will likely stick in the minds of Frankfurt supporters all week. 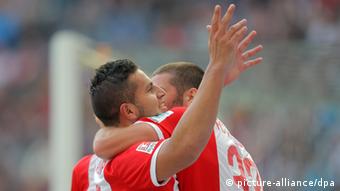 The Eagles were awarded a corner in the 15th minute. The kick was good, landing right in the six-yard box, but replays clearly showed Augsburg's Dominik Kohr tugging on Vaclav Kadlec's jersey, preventing him from chasing after a loose ball for at least a shot on goal.

It was a clear case for a penalty, which could have shifted the game's momentum early on. There was no call from referee Manuel Gräfe, however, and instead it was Augsburg who slowly turned the match in their favor.

Their persistence paid off just after the break, when Frankfurt carelessly lose possession in their own half. Halil Altintop fought through against Frankfurt defender Anderson and passed to Raul Bobadilla, who took a direct shot on goal from around 13 meters and slotted it inside the far post.

Augsburg continued to create chances for the rest of the half, utilizing Tobias Werner more than once, who was unlucky to end the game without a goal when his shot struck the inside of the post.

Crisis-hit Hamburg without a win

Elsewhere, Hamburg drop to rock-bottom in the league table after losing 2-0 at Hannover. The Bundesliga dinosaurs have now gone winless in the first three matches in each of the last four seasons. 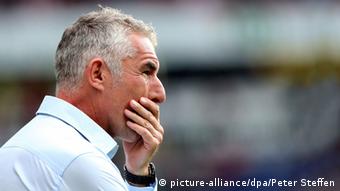 Slomka's dismal record in Hamburg leaves his side bottom.

The chips were certainly stacked against under-fire Mirko Slomka coming into Sunday's match against his former club, Hannover.

In the last 13 Northern Derby matches between the two clubs, the away team – Hamburg in this case – has not managed a victory. Despite sending seven new players onto the pitch compared to last week's 3-0 debacle against Paderborn, Slomka would have no luck ending the away team's Northern Derby losing streak.

Hannover dominated the game from the get-go and quickly went up two goals up, courtesy of midfielder Leon Andreasen in the 13th and Artur Sobiech in the 24th minute. Slomka benched his regular keeper Rene Adler in favor of Jaroslav Drobny to start the match, but the two goals were more a product of Hamburg's back line giving Hannover way too much space than any weakness between the posts.

Two Hamburg debutants – Lewis Holtby and Julian Green – showed potential towards the end of the first half by keeping Hannover keeper Ron-Robert Zieler on his toes. Hannover, though, remained the better team throughout the entire game.

The defeat leaves Slomka under immense pressure after a busy transfer window. The 47-year-old joined the team in December 2013 in an attempt to prevent the team's first-ever relegation. They stayed in the top flight after winning the relegation playoff at the end of last season, but have fallen into last place with the loss.

Hannover, however, are now in third place, tied on points with league-leaders Bayern Munich and Bayer Leverkusen at seven each.

Check out our Live Ticker for both matches, as they happened.