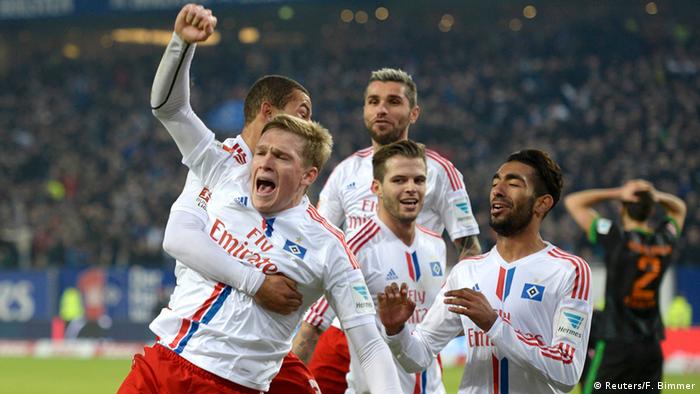 Hamburg had only managed to score four goals this season heading into their home match against Werder Bremen, but with a little help from the visitors, they increased their tally to six.

Hamburg coach Josef Zinnbauer dipped into the talent pool to hand a debut to youngster Mohamed Gouiada, but his team never really threatened Bremen's goal until late in the match.

Zinnbauer brought on a second striker in the form of Artjoms Rudnevs in the 67th minute and it worked. Six minutes from time, the Latvian forward scored the opening goal.

Clemens Fritz then got sent off for Bremen, and the match came to a comical conclusion. With Bremen pushing forward, Hamburg caught them out on a four-against-one counterattack. Tolgay Arslan somehow found only the post from point-blank range, but Bremen keeper Raphael Wolf jumped on the ball and inadvertently pushing it over the line.

The 2-0 win took Hamburg out of the relegation zone and dropped Dortmund to third-last. Bremen have now lost for the first time under new head coach Viktor Skripnik and are second from bottom. 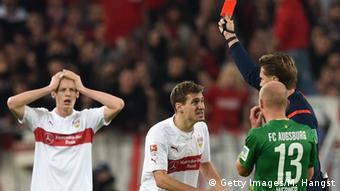 In the final match of the weekend, Augsburg made an impressive leap into sixth place with a 1-0 win at Stuttgart - also with help from their opponents.

Stuttgart were down to ten men in the 34th minute with defender Daniel Schwaab harshly receiving his second booking of the game. Coach Armin Veh restructured, and the match remained goalless at the break.

After the hour mark, Augsburg turned up the heat and generated a batch of excellent chances. Teenager Timo Baumgartl, making his first league start, blocked off the line to deny Halil Altintop, who also dragged a long-range effort inches wide.

Markus Weinzierl's team broke through after 72 minutes. Club captain Paul Verhaegh converted a controversial spot-kick after a handball from Adam Hlousek. That goal squeezed Augsburg within two points of a Champions League berth.

Meanwhile, Stuttgart stay bottom of the table with just nine points on the board.

Saturday's round 12 action was high scoring and topsy turvy. Bayern won convincingly and welcomed back a star. Schalke just hung on for three points, and Dortmund's frustrations continued. (22.11.2014)

Bundesliga Round 12 in Pictures

Dortmund's wild, weird and anything but wonderful domestic season continued, while Bayern cruised and a number of teams pulled off comebacks. Here's a vivid look at all the Round 12 action.