Hamburg have narrowly bested Greuther Fürth in a cagey relegation playoff match. It was a tough test for Mirko Slomka's men, who could've easily seen their club's 50-year run in the Bundesliga come to an end. 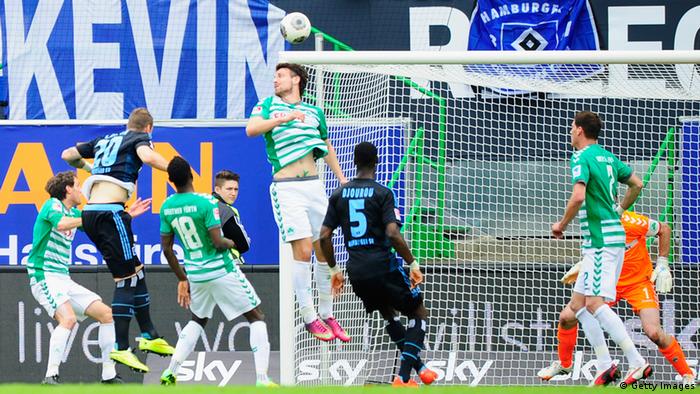 Hamburg's 1-1 draw with Greuther Fürth on Sunday was enough to see them earn Bundesliga survival on away goals, after the 0-0 first leg result earlier in the week. The Bundesliga's dinosaurs - the only club never to be relegated in the history of the league - managed to keep their top flight streak alive. Just barely.

Key to the match was striker Pierre-Michel Lasogga, on loan from Hertha Berlin. The German scored the lone goal that was enough in the end for Hamburg, proving a crucial cog to their successful result.

After plenty of testing opportunities early on, Hamburg finally got the opening goal in the 14th minute. Lasogga, whose last-minute return from injury has been so crucial to Hamburg, headed in a Raffael Van der Vaart corner. A deserved goal gave Hamburg a deserved lead, after more than 100 minutes of football had been played between the two sides.

Unfortunately for the visitors, their first-half euphoria was dampened somewhat by the injury to Johann Djourou. The Swiss defender had a nasty fall on his head and neck that forced his replacement by Michael Mancienne on the half-hour mark. After leaving the pitch on a stretcher, he was taken to the hospital for further testing, but was reportedly alert and responsive.

While Hamburg had looked likely to double their lead in the first half, the second period of play belonged almost entirely to Fürth.

Not 15 minutes after the restart, Stephan Fürstner drew level for the hosts. Zoltan Stieber's pass cut through the Hamburg defense into the box, and Fürstner's smart, low finish beat Hamburg stand-in keeper Jaroslav Drobny to make it 1-1. The goal inspired the Trolli Arena crowd and restored Fürth's fading hopes of reaching the Bundesliga. 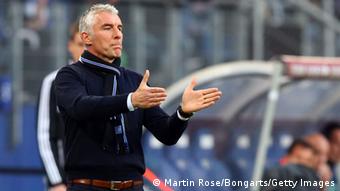 It was a tense second half on the touchline for Slomka

As the match wore on, Fürth continued their onslaught. Time after time the visitors raced into the final third, but their finishing always let them down. Their inability to capitalize on their chances was encapsulated by their best opportunity of the night just before stoppage time. After Niclas Füllkrug brought the ball to the end line and sent a pass into the box, Ilir Azemi unexpectedly found himself in possession in front of an empty net. Unfortunately, he could only manage an errant giveaway rather than a shot on goal.

Hamburg held on for the remaining few minutes of the match, and their Bundesliga hopes were secured. It was a hugely important result for HSV, who avoided the ultimate punishment for their large wage bill, impressive roster and nonetheless poor management and results.

"That was the closest of all possible decisions. In the first half we played really, really well. In the second half after the equalizer there came the frustration, because from the outside you have little influence," said Slomka after the match.

"I'm just full of adrenaline," said Lasogga, who lamented the abuse he said he received from the opposing bench and crowd. "We didn't win a title, but these are incredible emotions."

Fürth, meanwhile, must spend another season in the second division, despite a strong third-place finish. It is the second consecutive year a top-flight club has defeated its lower league opponent in the relegation playoff after Hoffenheim survived their two-legged encounter with Kaiserslautern last season.

"It hurts right after the match because the team wasn't rewarded for their great effort and good footballing game. But we played a terrific season, and performed well in these two games," said Fürth coach Frank Kramer. "You have to accept that in sports. We need to let this sink in and then we'll look ahead again and want to be even better prepared for the new season."