Militants have raided an education department building in eastern Afghanistan, trapping workers inside. It's the third major attack in less than two weeks in the increasingly volatile region on the border with Pakistan. 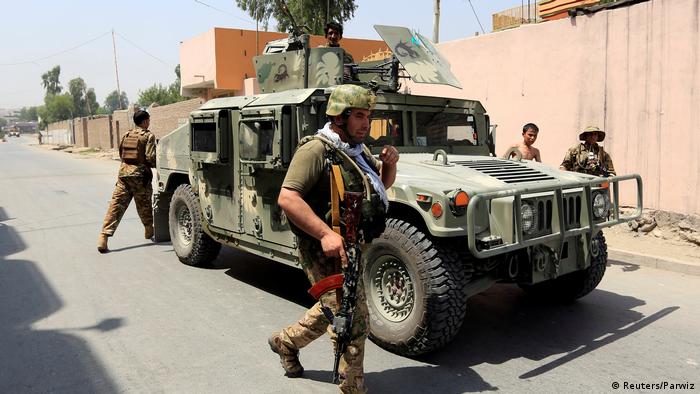 Security forces battled to free workers from a Jalalabad education department compound on Wednesday morning after gunmen launched an assault on the building, officials said.

At least 11 people were reported killed, with about 10 people wounded.

Nangarhar provincial police chief Ghulam Sanayee Stanekzai said one of the militants detonated an explosives vest, while a second attacker was shot and killed by security forces.

"A few offices and rooms in the building were burned down as a result of the attack," he said.

It wasn't immediately clear who was behind Wednesday's assault.

Jalalabad, the capital of Nangarhar province, has been hit by several deadly attacks in recent weeks. On Tuesday, a suicide attack targeting Afghan security forces killed at least 12 people. On July 1, a group of Sikhs was killed in another bombing.

Both attacks were claimed by the "Islamic State" (IS) militant group, which has become a small but dangerous presence in Afghanistan since first emerging there in 2015.

US and Afghan forces are engaged in operations against the group, but the recent bombings have underlined the instability that persists in many parts of the country, particularly near the border with Pakistan.

The Taliban is also continuing to carry out attacks after a truce with security forces last month fell apart after only a few days.

Wednesday's attack comes as President Ashraf Ghani seeks greater commitment to the conflict from NATO members at a summit in Brussels. There are currently around 14,000 US troops in Afghanistan as part of a NATO mission to support and train local forces.