Voters had been hoping the presidential elections would draw a line under years of political chaos. But the day ended with scuffles and accusations of cheating. 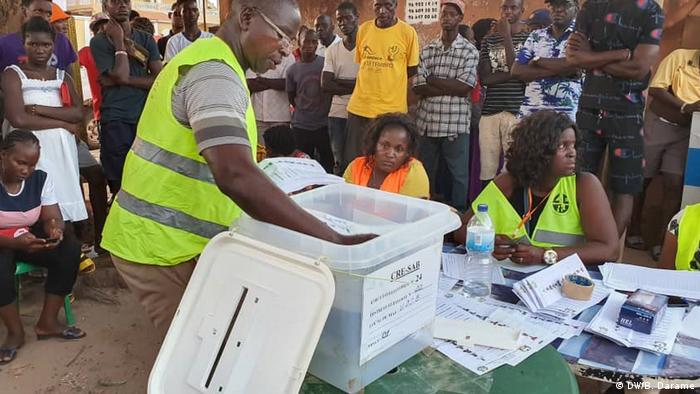 Guinea-Bissau's election concluded on Sunday with the current president's team accusing opponents of electoral corruption. Fights broke out on the streets of the West African country.

Botche Cande told reporters that cheating had occurred "with the complicity of the African Party for the Independence of Guinea and Cape Verde" (PAIGC), the largest party in parliament.

Cande said a member of the PAIGC's youth wing was seen distributing rice and money in exchange for votes.

"Under such conditions, President Vaz will not accept tainted results," he added.

Nevertheless, Felisberta Moura Vaz, deputy executive secretary and spokeswoman for the National Election Commission, told DW that a definitive result will be confirmed in the coming days.

"Regarding the provisional results, we will pronounce in the next 72 hours," she said.

The spokeswoman also called for calm. "I take this opportunity to appeal to the tolerance, serenity and sense of responsibility of all the candidacies, media and others involved in this noble act. Once again appealing to the national and international community, in particular to national and foreign media, to refrain from conveying information leading to electoral results, this competence is exclusively within the CNE's mandate."

Jose Mario Vaz, 61, is seeking a second term as president after a turbulent first stint amid the dismissal of high-level members of his team, as well as accusations of corruption.

Just last month, it was still unclear as to whether Guinea-Bissau's election would go ahead. There were coup allegations and military patrols in the country's capital with many fearing Sunday's elections would be cancelled.

Ghana held their nerve to beat Guinnea-Bissau to top Group F. But there was disappointment for holders Cameroon, who were held by draw-specialists Benin. Tunisia drew again, but still made the knockout rounds. (02.07.2019)

The PAIGC has secured the highest number of seats but it will need to work with other parties to secure a majority. The parliament has been stuck in a stalemate for the past four years, with people hoping for change. (13.03.2019)