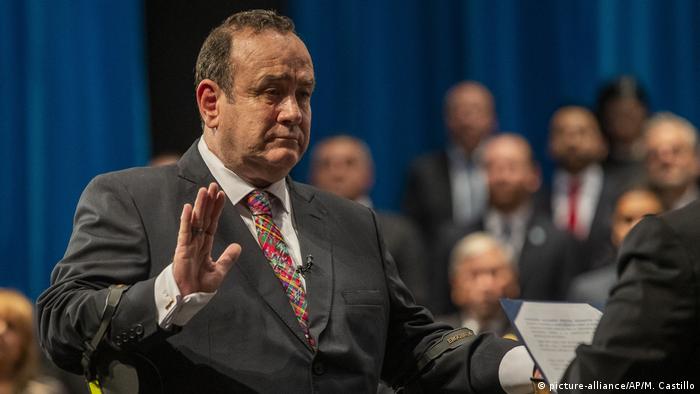 Guatemala swore in Alejandro Giammattei as its 51st president on Tuesday as its outgoing leader, Jimmy Morales, exits amid swirling corruption accusations.

The former surgeon and prison chief had run for the country's top job three times before winning a runoff vote in August. A conservative politician who is opposed to same-sex marriage and abortion, Giammattei ran on a tough-on-crime platform that included reintroducing the death penalty.

"The time has come for our country to no longer be identified with violence. This law will allow us to prosecute, process and sentence
gangs for what they are: terrorist groups," he said.

Deal with the US

Before his inauguration, Giammattei met with the Trump administration officials to discuss how to curb illegal immigration and improve border security. The 63-year-old's predecessor signed an Asylum Cooperation Agreement with the US government in July despite opposition to the deal in Guatemala.

Several Guatemalans were part of a 3,000 migrant caravan that moved through Latin America last year seeking to receive asylum in the United States. US President Donald Trump, who condemned the migrant caravan, threatened to impose tariffs on Guatemala if the government didn't agree to the migration deal.

Giammattei assumes leadership of a country in which 59% of its citizens live below the poverty line and nearly 1 million children below the age of 5 are estimated to live with chronic malnutrition, according to official figures. He takes over for Morales, who spent much of his four-year term dodging corruption accusations.