Leading members of the environmentalist Greens have expressed openness toward coalition talks with Merkel's conservative Christian Democrats. But some Greens are calling for a coalition with the SPD and Left Party. 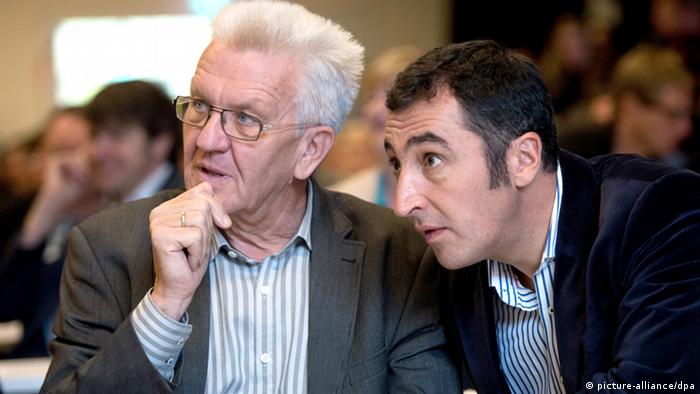 At a postelection party conference in Berlin on Saturday, the Greens discussed possible partners in a future coalition government. While joining with the center-right CDU is considered unlikely, leading Greens called on their party colleagues to remain open to the idea of working with Chancellor Angela Merkel.

Winfried Kretschmann (pictured above left), the premier of the southern state of Baden-Württemberg, said that a grand coalition between the Social Democrats and Christian Democrats could jeopardize Germany's national efforts to transition to renewable energy and away from fossil fuels.

Kretschmann - the first and only Green to lead a German state - said that the SPD and CDU would only look at energy policy in terms of the costs, and that they support coal. He called on his colleagues to seriously consider coalition talks with the CDU, even though the Greens have major differences with Merkel's party.

"We have to make it clear that we are ready to take on responsibility, even if it fails," Kretschmann said.

Jürgen Trittin, the party's top candidate in the election, indicated that the Greens were prepared to negotiate with any of the parties represented in parliament.

A grand coalition between the CDU and SPD is widely considered the most realistic possibility. The SPD voted yesterday to enter coalition negotiations with the CDU, despite deep skepticism among the center-left party's base.

The Greens won just 8.4 percent of the vote last Sunday, two percentage points less than their 2009 result. Katrin Göring-Eckardt, who led the campaign along with Trittin, said the Greens focused too much on raising taxes.

"The people felt threatened and patronized by us, not enthused," Göring-Eckardt said, calling for the party to return to the environment "again as our central theme."

Trittin accepted responsibility for the election result. He said that the campaign overestimated voters' willingness to accept change and underestimated the amount of opposition to the Greens. Trittin has already resigned from his position as the party's parliamentary chief.

Three of the Greens' senior politicians - Claudia Roth, Renate Künast and Jürgen Trittin - have said they will not seek reappointment to top party jobs. The party has pledged a "fresh start" for the 2017 election. (24.09.2013)