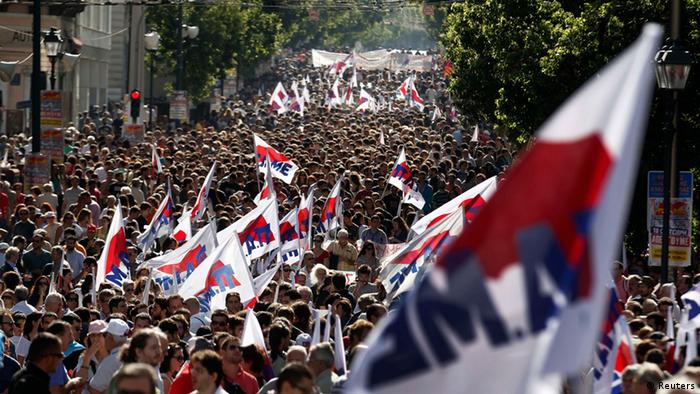 Riot police fired tear gas in Athens on Thursday in an attempt to repel protesters hurling stones and petrol bombs. Some 40,000 protesters were gathered on the streets of the Greek capital as a 24-hour general strike got underway.

According to a health ministry official a 65-year-old man died from heart failure during the demonstration. "A 65-year-old man was taken to hospital where efforts to revive him failed," the official said. "There were no bruises on his body."

A further three people were injured during clashes, and 50 people were detained on suspicion of attacking members of the police. A smaller demonstration was also held in Greece's second major city of Thessaloniki.

The general strike is the second in less than a month and the fourth this year. It closed down most business and public sector activity. Taxi drivers and some kiosk owners joined the stoppage, which also paralyzed airports, banks, schools, museums and passenger ferries.

The strike was called by the country's two largest labor unions, ADEDY and GSEE, to protest against government reforms and austerity measures demanded by Greece's international lenders in order for the indebted nation to receive the next installment of its bailout package.

Late on Wednesday, the so-called troika of lenders - comprising the International Monetary Fund, the European Commission and the European Central Bank -announced that "most of the core measures" had been agreed.

Prime Minister Antonis Samaras' government has been urged for months by the troika to jump-start economic reforms and lighten the Greek budget by 9.2 billion euros ($12 billion) next year.

Agreement would secure the release next month of a 31.5-billion-euro-loan slice seen as needed to avoid Greek state bankruptcy and recapitalize banks.

Cuts made over the past two years have mainly affected wages, pensions and welfare benefits while slashing the runaway deficit. One in four Greeks has been left officially unemployed as the economy retracts.

Visiting the Romanian capital Bucharest on Wednesday, Samaras said he was still trying to persuade his EU peers to give his country more time to implement the latest cuts and transform the country into a "modern economy."

"People are not 'spare parts.' You have to fix the problems while keeping the society together, and its cohesion alive," Samaras said.