Greek rescuers have saved more than 300 people from a capsized boat in international waters south of the island of Crete. It was unclear where the migrant boat was launched or where it was heading. 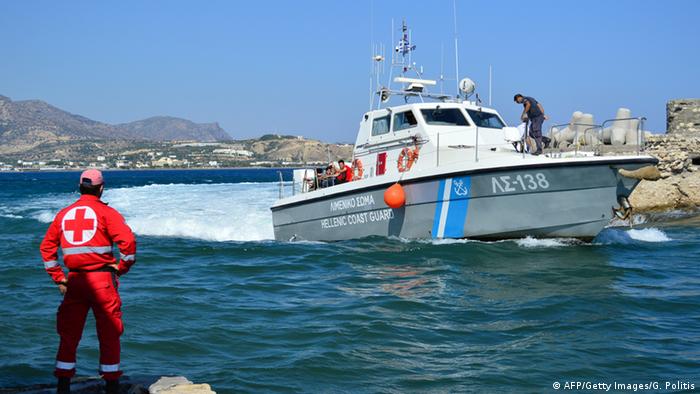 Greek coastguard boats, helicopters and four nearby ships came to the aid of a "significant number" of people stranded after their boat capsized about 120 kilometers (75 miles) south of Crete in international waters, Greek authorities said Friday.

At least four bodies were retrieved and more than 300 rescued. The death toll was expected to rise as rescue operations continued to search for at least another 300 believed to have been onboard.

The Italian coastguard first received a report about the capsized vessel on Thursday from a passing boat and alerted Greek and Egyptian authorities.

Italian authorities alerted counterparts in both countries, but Egypt declined to intervene "considering the position of the boat to be beyond its area of its responsibility," according to Italian reports.

Greek authorities were then urged to take over control of rescue operations, while Rome issued an SOS appeal to ships passing nearby. Four ships responded and one reported the capsizing of the migrant boat at 7:20 am local time (0520 UTC), the Italian coastguard said.

Most migrants fleeing war and poverty in the Middle East and Asia make the treacherous boat run to Greek islands close to the Turkish coast.

Crete is nearly 300 kilometers from Turkey and Libya, another major springboard for migrants trying to reach Europe.

The number of migrants crossing from Turkey to Greece has dropped off dramatically since the closure of the main Balkan land route to northern Europe and an agreement made earlier this year between the EU and Turkey to take back migrants.

Some 204,000 migrants have tried to cross the Mediterranean to Europe this year, according to the UN refugee agency. Most of them crossed before the Aegean and Balkan routes were effectively shut.

However, the onset of better weather has witnessed a spike in the number of migrants using the central Mediterranean route from Libya to Italy, where EU navies operate to intercept boats. More than a thousand migrants drowned at sea along that route alone last week. Nearly 2,500 people have died across the entire Mediterranean this year.

Most of the migrants coming from Libya, where people smugglers operate with near impunity, are from sub-Saharan Africa.

There was no indication if the capsized boat was blown off course after departing from Libya to Italy, or if smugglers in Turkey were trying to circumvent NATO patrols in the Aegean.